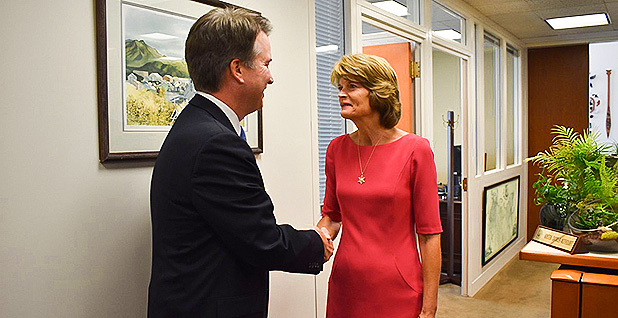 The Alaska Republican will have additional time to review the matter after the Senate Judiciary Committee today postponed a vote on Kavanaugh for one week — a move that was widely expected and is in accordance with the panel’s rules.

Last week, the president of the Central Council of the Tlingit and Haida Indian Tribes of Alaska — which number over 30,000 — wrote to Murkowski, citing the exchange as one reason to oppose Kavanaugh’s nomination.

Yesterday, the Alaska Federation of Natives — the state’s largest native organization — also came out "strongly" opposed to Kavanaugh, in a lengthy statement that highlighted Hirono’s exchanges with the nominee.

Speaking with E&E News yesterday, Murkowski said she has watched Hirono’s exchange with Kavanaugh, has already reviewed some of the "committee confidential" documents highlighted by her colleague during the exchange, and plans to personally visit the panel and "review further."

However, Murkowski noted she was not particularly concerned by the exchange because she had already discussed with the nominee two of the writings highlighted by Hirono — an op-ed Kavanaugh wrote questioning whether Native Hawaiians are American Indians and a related amicus brief on the case in question, Rice v. Cayetano, which was settled by the Supreme Court in 2000.

"We spoke specifically to that case," she said. "So I just want to go back and see what other documents might be out there that might relate to either Native Hawaiians or tribes and American Indians, Alaska Natives more generally."

During their Aug. 23 meeting, Murkowski said, Kavanaugh conceded he was not an expert in tribal law.

"He was the first to admit that in terms of broader Indian law he hasn’t had that much opportunity in the D.C. Circuit court to really engage on these issues, so this is not a body of law that he is often exposed to," she said. "And he was very direct with that."

Pressed on his views on Native Hawaiian rights in several of the more than 1,000 questions for the record, Kavanaugh responded that the 2000 case on Native Hawaiians "had no effect on the rights and privileges of American Indians and Alaska natives that the Court had long recognized."

Asked separately if he had worked on any matters during his tenure at the George W. Bush White House in which he argued that Native Hawaiians or other indigenous people were not entitled to the same constitutional protections as American Indians, Kavanaugh referred to a blanket answer he gave to multiple questions submitted by Judiciary members about the Bush years.

"I do not recall all of the matters that I worked on during this time, and regardless, my role was not to replace the policy or legal advisors, but rather to make sure that the President had the benefit of the views of his policy and legal advisers," he said.

Hirono made a motion this morning for the release of any Bush-era documents related to Native Hawaiians, Alaska Natives and American Indian tribes. The motion failed.

The committee spent most of its meeting debating whether the nomination process was moving too quickly and whether more papers should be released. Democrats made several failed motions to subpoena various sets of records.

The committee now plans to take up the Kavanaugh nomination next Thursday.

Meanwhile, senators and court watchers are busy unpacking the newly released trove of written questions and answers between Kavanaugh and committee members.

In the lengthy file released last night, Kavanaugh rejected what he called a mischaracterization of his judicial record as pro-business.

"I disagree with the characterization of my record," he said, responding to a question from Sen. Dick Durbin (D-Ill.). "I rule for the party who has the best argument on the merits.

He also explained his opinions in several environmental cases and defended a dissent in which he found that EPA should have considered the costs to industry when crafting regulations for mercury and toxic air emissions for power plants.

Kavanaugh noted that his position was "vindicated" by the Supreme Court when it adopted his analysis, and he noted that his views on consideration of costs for environmental rules have been embraced by liberal justices and leading academics.

Sen. Sheldon Whitehouse (D-R.I.) submitted a list of Kavanaugh’s environmental opinions and asked the judge to explain whether and how they favored environmental interests. That was a touchy subject during last week’s hearings, as critics disputed a list of cases Kavanaugh cited as examples of times he has sided with environmentalists.

Kavanaugh’s answers provided only a little additional insight into his approach to environmental and climate issues, as he sidestepped many issues that he deemed likely to come before the court again (Climatewire, Sept. 13).

Separately, Judiciary ranking member Dianne Feinstein (D-Calif.) said she had received information from a source about Kavanaugh that she passed on to investigators. She did not detail the information and said the source wished to remain anonymous.

Senators did take action today on several other nominees, including Ryan Douglas Nelson for the 9th U.S. Circuit Court of Appeals.

Nelson previously served as a Justice Department lawyer and in private practice. Last year, he was President Trump’s pick to be solicitor for the Interior Department before instead being tapped for the 9th Circuit. The panel advanced his nomination on party lines.

The committee also moved forward the nominations of Richard Sullivan to the 2nd Circuit and nine district court nominees. Votes on several other picks were postponed.