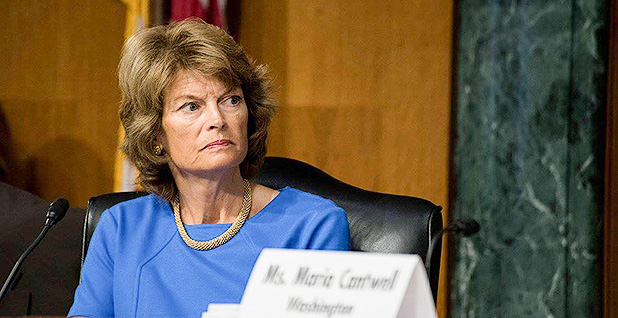 Senate legislation unveiled last night to allow oil and gas drilling in part of the 19-million-acre Arctic National Wildlife Refuge would allocate a 50 percent revenue-sharing split between the state of Alaska and the federal government.

Calling it a "tremendous opportunity" for both Alaska and the country, Energy and Natural Resources Chairwoman Lisa Murkowski released her much-anticipated language in advance of a markup scheduled for Wednesday.

The Alaska Republican’s proposal would require the Interior Department to conduct two lease sales within ANWR’s coastal plain within the 10-year budget window.

It also calls for the secretary to "issue any necessary rights-of-way or easements across the coastal plain for the exploration, development, production, or transportation associated with the oil and gas program," according to a summary.

The fiscal 2018 budget resolution, which Congress passed last month, tasked Murkowski’s panel with finding $1 billion in new revenues during the next decade as part of a larger GOP effort to accelerate tax cuts through the reconciliation process.

Those instructions gave Murkowski the opportunity to write legislation paving the way for drilling in the refuge’s 1.5-million-acre coastal plain, a longtime priority of the Alaska delegation and other Republicans.

Attaching ANWR language to the larger tax package through reconciliation allows it to move by a simple majority vote without the threat of a filibuster. That means it won’t need any Democratic support in the Senate.

It’s the best shot the Alaska delegation has had in decades to realize its goal of allowing energy development in the refuge’s coastal plain, also known as the 1002 area.

"For over 40 years, Alaskans have led the fight to safely and responsibly unlock the 1002’s vast energy resources," Rep. Don Young (R-Alaska) said in a statement. Young, a 23-term lawmaker, has shepherded such legislation successfully through the House more than a dozen times.

"Today is an important step in that process, one that ultimately works to create new jobs and opportunities for our people, generate new revenue and wealth, and strengthen the economic outlook of Alaska and the nation," he added.

In addition to the 50-50 revenue-sharing split between Alaska and Uncle Sam, Murkowski’s legislation would impose a 16.67 percent royalty rate for leases.

"The legislation I released tonight will put Alaska and the entire nation on a path toward greater prosperity by creating jobs, keeping energy affordable for families and businesses, generating new wealth, and strengthening our security — while reducing the federal deficit not just by $1 billion over ten years, but tens or even hundreds of billions of dollars over the decades to come," Murkowski said in a statement.

The left-leaning Center for American Progress analyzed data based on recent lease sales in the state, which found the federal government could expect closer to $37.5 million in earnings. That is well short of $1 billion.

Michael LaRosa, communications director for the Environment and Natural Resources Committee’s top Democrat, Maria Cantwell of Washington, took to Twitter shortly after Murkowski made her announcement criticizing the plan.

"This revenue source will pay for 0.067% (less than one-tenth of one percent) of the cost of tax cuts for the wealthy," he wrote.

Cantwell is a fierce opponent of oil and gas drilling in ANWR and successfully led the last major effort to defeat a Senate measure to allow energy development in the region. That was in 2005.

The Alaska Wilderness League, which has long opposed drilling in the refuge, criticized Murkowski’s legislation and blasted Republicans’ use of the reconciliation process to try to advance energy development in ANWR.

"It’s deplorable that a backdoor budget maneuver is being used to ram Arctic drilling through without a full, fair and open debate," Adam Kolton, the group’s executive director, said in a statement. "This bill would allow roads, pipelines, gravel mines and well pads to be erected across the entire birthing grounds of the Coastal Plain, where caribou calve and where polar bear mothers den."

The Wilderness Society also lambasted the bill and its insertion into the budget process.

"Most Americans oppose drilling in the refuge, and the backers of this bill are keenly aware that if it were subject to a full debate and vote, the scheme would lose on the merits," said Nicole Whittington-Evans, the group’s Alaska regional director. "With millions of acres already open for oil leasing in the Arctic, industrializing and destroying this refuge makes absolutely no sense."

"Each lease sale must contain at least 400,000 acres and be comprised of those areas that have the highest potential for the discovery of hydrocarbons," the legislative summary said.

Drilling supporters say it not only would boost the economy, but also would strengthen national security because it would make the United States less reliant on foreign oil.

"I have no doubt that this legislation, which would lead to producing more energy responsibly by opening up the small section of the 1002 area in ANWR, will help make the United States the world’s energy super power again, will dramatically increase our country’s national security and lead to American jobs and productive diplomacy around the globe," Alaska Republican Sen. Dan Sullivan said in a statement.