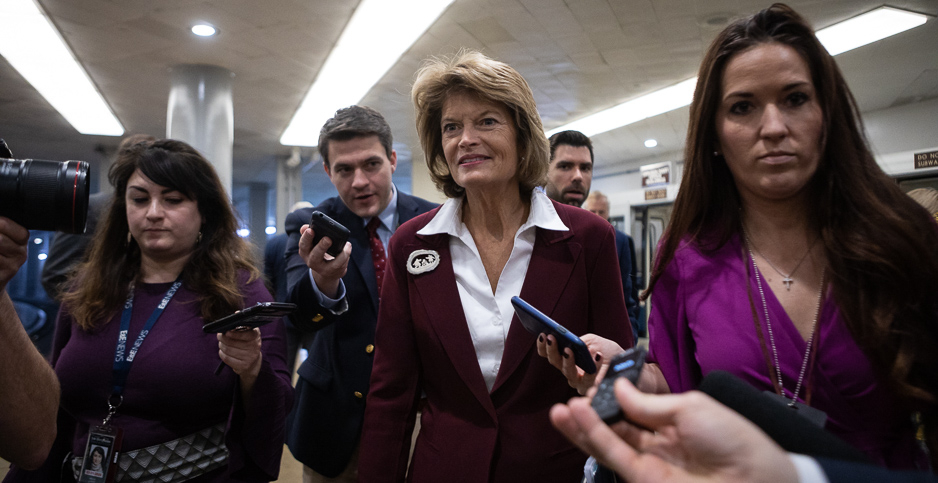 Her Democratic counterpart on the committee, ranking member Joe Manchin of West Virginia, proposed censuring the president instead.

Both senators, who have drawn intense scrutiny throughout the president’s impeachment trial, took to the Senate floor after the House managers and Trump’s defense team closed earlier in the day. Votes on the two articles of impeachment will take place at 4 p.m. tomorrow.

"I cannot vote to convict," Murkowski announced, blaming House Democrats’ haste for sending a case to the Senate based on a "rotted" foundation.

"The House rushed through what should have been one of the most serious, consequential undertakings of the legislative branch, simply to meet an artificial, self-imposed deadline," she said.

Murkowski’s announcement ended weeks of speculation, during which she was seen as receptive to voting with Democrats to subpoena additional witnesses.

However, on Friday, she voted against doing so, saying she did not want to unnecessarily drag the Supreme Court into the impeachment fight (E&E News PM, Jan. 31).

In her speech yesterday, she also harshly criticized Trump’s actions in withholding U.S. aid for Ukraine in an attempt to initiate a corruption investigation into former Vice President Joe Biden and his son Hunter, which she called "shameful and wrong."

"His personal interests do not take precedence over those of this great nation," she said. "The president has the responsibility to uphold the integrity and the honor of the office, not just for himself, but for all future presidents."

Murkowski added, "Degrading the office, by actions or even name-calling, weakens it for future presidents, and it weakens our country."

She criticized her fellow senators, as well. "For all the talk of impartiality, it is clear to me that few in this chamber approached this with a genuinely open mind," she said.

"Some have been calling for the president to be impeached for years. Others in this chamber saw little need to even consider the arguments from the House before stating their intentions to acquit over the course of the past few weeks."

Murkowski chided her colleagues for excessive partisanship. "At some point for our country, winning has to be about more than just winning, or we’ll all lose," she said.

While he did not announce how he will vote tomorrow, Manchin drew scrutiny yesterday by announcing a resolution to censure Trump for his actions.

Expressing a desire to be "realistic," Manchin said it was clear that although there aren’t 67 votes to remove Trump from office, a bipartisan majority of the Senate would vote to censure Trump.

"Censure would allow this body to unite across party lines, and as an equal branch of government, to formally denounce the president’s actions and hold him accountable," Manchin said.

"His behavior cannot go unchecked by the Senate, and censure would allow a bipartisan statement condemning his unacceptable behavior in the strongest terms."

Speaking ahead of Murkowski, he acknowledged the pressures of being a "moderate centrist Democrat" in a pro-Trump state, while speaking favorably about the arguments made by the House impeachment managers and Trump’s defense team.

"I am truly struggling with this decision and will come to a conclusion reluctantly," he said at one point.

However, Manchin said he had concluded that Trump’s July 25 call with Ukrainian President Volodymyr Zelenskiy was "far from perfect."

"No one, regardless of political party, should think what the president did was right," he said. "It was simply wrong."

He later added that "no president is a king" but also raised a point made by many Republicans: that the voters should decide Trump’s fate in November.

"The ultimate question is not whether the president’s conduct warrants his removal from office, but whether our nation is better served by his removal by the Senate now or by the decision the voters will make in November," Manchin said.

While Murkowski and Manchin have been consumed with the two-week impeachment trial, Energy Committee staff members from both parties have been working to assemble a bipartisan package of energy bills that have passed the committee for a possible floor vote in the coming weeks (E&E Daily, Jan. 30).

Murkowski told E&E News yesterday that those efforts continue. "The update that I’ve got is that things are moving along, so hopefully, that’ll put us in the position where we want to be," she said.

Another option is the Senate’s $287 billion transportation reauthorization bill that passed the Environment and Public Works Committee last August.

That bill still needs to be approved by four other Senate panels, including the Finance Committee, which has to pay for it.

But EPW Chairman John Barrasso (R-Wyo.) said he thought those committees could sign off on the bill fairly quickly — including Finance. "We’ve been working with them since the fall," he told E&E News yesterday.