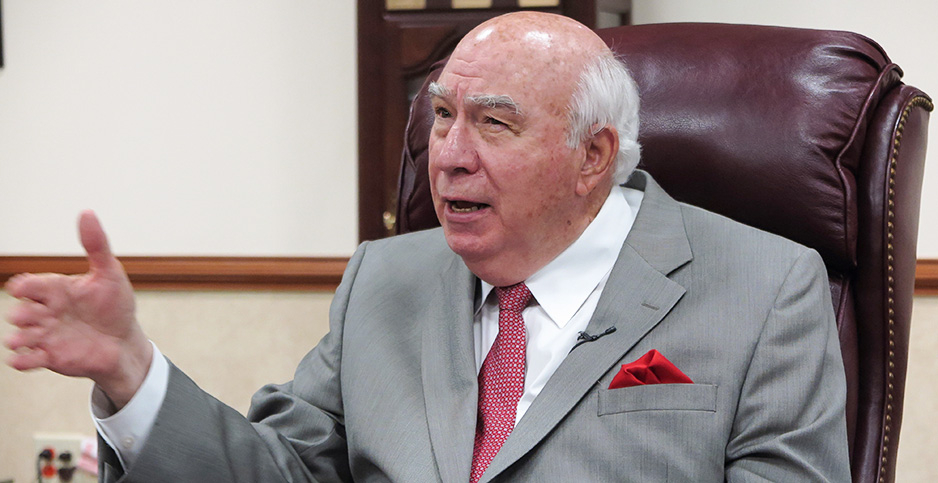 Murray Energy Corp.’s bankruptcy threatens to quiet the loudest and most litigious critic of environmental regulations in the coal industry.

Under the proposed restructuring plan, the company’s founder, Bob Murray, will step down as president and CEO.

Murray will remain chairman of the board, and his nephew, Robert Moore, is taking over as chief executive of the country’s largest privately held coal mining firm.

Bankruptcy has put Murray Energy at the mercy of its creditors. And the new power dynamic jeopardizes the company’s search-and-destroy approach to environmental policy.

Murray established himself as President Trump’s "guy" in the coal industry with large campaign contributions and fundraisers, but the results have been a mixed bag (E&E Daily, Oct. 30).

Shortly after the president’s inauguration, Murray delivered a 16-point "action plan" to the White House (Greenwire, Jan. 11, 2018). The administration has attempted to act on many of the plan’s 16 points, but many have been bogged down in the courts or fallen through the cracks.

And Trump has yet to enact any measure to reverse his industry’s fundamental problem — the continuing closure of power plants that consume 90% of the nation’s coal.

The Federal Energy Regulatory Commission — "feckless" FERC, as Murray calls the panel — did not take up the administration’s plan to subsidize coal and nuclear plants falling victim to the natural gas boom.

The White House also did not follow through on Murray’s request to invoke emergency protections for coal-fired power plants under Section 202(c) of the Federal Power Act.

Still, the power shift at Murray Energy could affect the legal war the company has waged against the legacy of President Obama — "the greatest destroyer the United States has ever had," according to Murray.

Murray Energy is listed as the lead challenger in more than 20 lawsuits against the federal government, according to court records. The company’s most frequent foe? EPA.

"He had a comprehensive approach to legal challenges to EPA rules," said Janet McCabe, who led the agency’s air office in 2015 under Obama.

"Not just the ones that would have directly impacted the coal industry — like the Cross-State Air Pollution Rule and Clean Power Plan — but ones that addressed clean air more generally, presumably in fear that those rules would lead to further controls on coal-fired power plants."

Murray Energy secured a notable courtroom win after the company — and other parties — pushed for a delay of the Clean Power Plan’s implementation while litigation over the power plant emissions rule played out in court.

In February 2016, the Supreme Court froze the regulation, which the Trump administration has since replaced with its Affordable Clean Energy rule.

The Trump rule, which does not set limits on carbon dioxide, is now the subject of a new round of litigation in the U.S. Court of Appeals for the District of Columbia Circuit, and the court has tossed the Clean Power Plan challenge.

Murray Energy has intervened in defense of the Trump administration’s rule in the new D.C. Circuit case.

Many of Murray Energy’s lawsuits ended in defeat. In 2018, the Supreme Court refused to take up a petition to require EPA to evaluate coal job losses and other economic impacts on the industry (Greenwire, Jan. 8, 2018).

Murray was a particularly outspoken foe of EPA’s 2015 decision to tighten its ground-level ozone standard from 75 parts per billion to 70 ppb (Greenwire, May 17).

Ozone, the main ingredient in smog, is produced by the reaction of nitrogen oxides (NOx) and volatile organic compounds in sunlight. Because coal-fired power plants are major emitters of NOx, any tightening of the ambient air limit for ozone threatened to accelerate the electricity industry’s shift toward other generating fuel sources, he warned.

Murray Energy filed the initial lawsuit challenging the 70-ppb standard on the first possible day in October 2015 (E&E News PM, Oct. 26, 2015). The 70-ppb limit "is neither achievable nor maintainable within the meaning of" the Clean Air Act, an attorney for the company wrote in a filing the next month.

The Obama administration continued with implementation of the stricter standard throughout the next year. Although the Trump EPA then paused the litigation in 2017 to consider its position on the threshold, agency officials ultimately chose to continue to defend it (Greenwire, Dec. 17, 2018).

In a ruling this past August, a D.C. Circuit three-judge panel unanimously upheld the primary standard, which is intended to protect public health.

Murray was also unsuccessful in persuading the Trump EPA to suspend two other major Obama-era regulations: the first-ever national regulations on coal ash disposal, published in 2015, and the Cross-State Air Pollution Rule update, issued in 2016 to reduce power plant NOx emissions that may hurt downwind states’ ability to comply with federal ozone limits.

While EPA has sought to soften some provisions of the coal ash rule, it has thus far left the main framework intact; the agency also has to address a separate D.C. Circuit decision last year that found some parts of the regulations are unlawfully weak.

Far from abandoning the CSAPR update, EPA has made it the linchpin of its defense to avoid further action to curb coal-fired power plant pollution that crosses state lines.

‘All about protecting coal’

The administration continues its pursuit of one particularly controversial objective important to Murray: the repeal of the legal underpinning for EPA’s 2012 limits on power plant releases of mercury, arsenic and other hazardous pollutants.

Under the proposed rule released last December, EPA would revoke its previous determination that it is "appropriate and necessary" to regulate releases of such pollutants from coal- and oil-fired power plants (Greenwire, Dec. 28, 2018).

While current EPA Administrator Andrew Wheeler, who previously lobbied for Murray Energy, has pledged that the existing emissions limits would remain in place under the proposal, critics suspect the company will quickly file suit to void the regulations if that determination is repealed.

"It’s clearly all about protecting coal," former EPA Administrator Gina McCarthy, who oversaw development of mercury standards during her tenure, said at a forum earlier this month.

A final version of the proposal is undergoing a routine review at the White House budget office. EPA hopes to publicly release the final rule as early as next month.