‘My nightmare has already happened’ 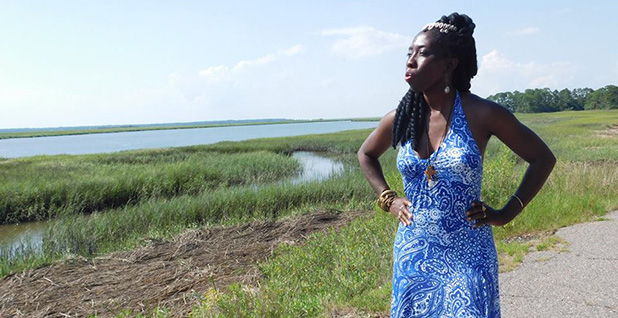 MADISON, Wis. — A continental divide of geography, language, culture and tradition separates the Gullah/Geechee Nation of the south Atlantic coast and the U.S.-Mexico border city of Imperial Beach, Calif.

But their elected leaders are bound by a common cause. They are trying to keep rising seas from destroying their ways of life.

"This is a lesson — get shit done, take risks, be innovative. And you know what? Never apologize ever for doing your job," said Dedina, who grew up in the middle-class community of 27,000 at the southernmost corner of California and still enjoys surfing in the nearby Pacific Ocean.

Dedina made news in 2017 when he filed a lawsuit on behalf of Imperial Beach to force more than 30 fossil fuel companies to pay for damages caused to the community from sea-level rise (Climatewire, July 18, 2017).

The lawsuit, brought by a handful of similar-minded California municipalities, set off a flurry of similar litigation against oil companies, including from the cities of Oakland, San Francisco, New York and Baltimore, as well as the state of Rhode Island. Most are still in court (Climatewire, March 14).

Dedina said he believes Imperial Beach has already seen some of the worst impacts of climate change. In January, a record tide combined with storm surge sent water from the Pacific Ocean into the city’s streets.

"What keeps me awake at night is 25-foot surf, 50-mph northwest winds and rising seas, and a king tide flood," he said. "My nightmare has already happened. The issue is how do you predict it, how do you deal with it and how do you pay for it?"

While much of the damage occurred on federal land, Dedina said the city paid $15,000 for cleanup and repair because the event happened during the federal government shutdown triggered by disagreements in Washington over the Trump administration’s proposed U.S.-Mexico border wall.

"That’s money for the junior lifeguard program, for the senior center, and for summer parks and rec programs. That’s money gone," he said.

Imperial Beach was likely spared from greater damage thanks to ocean monitoring by the Scripps Institute of Oceanography at the University of California, San Diego, that forecast the severe conditions five days in advance. "They nailed it," he said.

Quet opened the event with song and storytelling in her native Gullah language, imparting the deep cultural connection that the descendants of West African slaves have with the Sea Islands extending along 460 miles of coastline from North Carolina to northeast Florida.

Drawing from the Gullah people’s first encounters with non-Gullah climate scientists and experts, Quet spoke both in the distinct Creole dialect of the Atlantic low country and in English.

"We know you’re not from these Sea Islands," Quet said, "where these trawlers have gone out so extensively from around the world to do what they call derby fishing … where we see the storms opening up areas that were marsh and turning them into just waterways.

"We live on islands, so we see [the sea] rise every day. So it made no sense to anybody there. ‘What do you mean the sea is rising?’ Until we saw it on the road in the middle of the day, when there was no hurricane."

In fact, she said there is no word in the Gullah language for "adaptation." Rather, there is a deep knowledge that the islands are highly susceptible to environmental change, something the Gullah/Geechee people have been trying to impress on others for decades and longer.

"We said, ‘Don’t build in certain places, because it’s not’ — as that word in your language says — ‘sustainable,’" Quet said. "Then they said, ‘Well, y’all are just emotional natives. What do you know about it?’ I said the fact that I farm the land, I live on the land, all of my generations back to the 1600s" lived on the land.

Quet and Dedina were joined by Cynthia Naha, a member of the Hopi Tribe and director of natural resources for the Santo Domingo Tribe, and Richard Cruse, a professor of agronomy at Iowa State University, who spoke about their own formative experiences around climate change and adaptation.

Naha explained that Native Americans view the concept of adaptation as a "circle of resilience," where adapting to environmental conditions is viewed in a generational context.

"We have been resilient since the days dating back to the era of our ancestors and time immemorial," she said.

Naha said climate change "goes to the very essence of who we are because of our connection to the land, to Mother Earth and who we are." As a Hopi from northern Arizona, she said her community has witnessed roughly 60 years of mining and fossil fuel extraction near tribal lands, yet the federal government has done very little to address the downsides of climate change on Native American ways of life.

"We are the only people who have to live on reservations and who have to adhere to federal Indian law and policy," she said. "This really dictates a lot of what we do with our climate adaptation … because we still in the 21st century are considered wards of the federal government. … That does undermine who we are as indigenous people.

"We are fighting every day to make that stand and say we are the original inhabitants of this land."

Cruse said his climate change awareness "starts in the back seat of an old Ford car that my father would drive through the countryside" observing farmland after heavy rains.

"He said, ‘Son, without soil you have nothing. Everything you have either directly or indirectly relies on soil,’" Cruse recalled.

Decades later, Cruse said his father’s words still resonate, especially when he considers the role of soil health in carbon absorption and sequestration.

"Have you ever heard of a solar-powered, atmospheric carbon-extraction technology? Yeah, it’s plants and photosynthesis," he said.