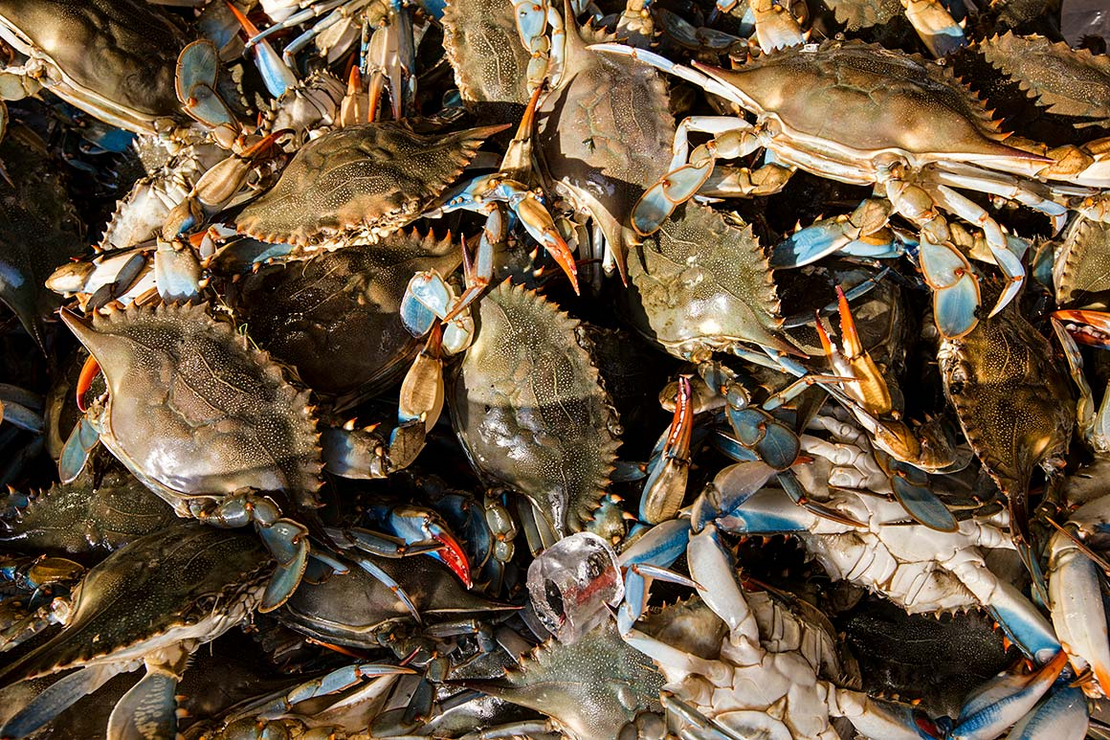 Crab cakes were the top seller for Clyde’s Restaurant Group, but the chain decided this summer to yank them off the menu after crab prices tripled.

Bart Farrell, the vice president of food and beverage for the company, said jumbo lump crabmeat that normally would have cost his company about $18 to $22 at this time of year is now selling for $60 a pound.

“We couldn’t justify the price that we would have had to charge. … We’re already absorbing high prices across the board on all food items, but when you’re talking about a 300% increase on your No. 1 item, there’s just no way that that has any sustainability,” said Farrell, whose company operates about a dozen restaurants in the Washington region.

While the coronavirus pandemic shuttered restaurants and battered the blue crab industry last year, 2021 has brought more bad news: Prices skyrocketed due to a shortage of blue crabs in the Chesapeake Bay, long a top producer of the "beautiful swimmer," a species distinguished by its bright blue claws (Greenwire, April 22, 2020).

The cause of the shortage is something of a mystery.

A winter dredge survey showed the overall population fell from 405 million in 2020 to 282 million in 2021, driven largely by a sharp drop in the number of juvenile crabs, which hit their lowest level since 1990. While it’s normal for the blue crab population to fluctuate from year to year, no one’s certain what caused this year’s steep decline.

“I must admit, I’m a little surprised. …. The conditions are relatively benign; I don’t think there’s any environmental condition that could be driving it,” said Tom Miller, a professor of fisheries science and director of the University of Maryland Center for Environmental Science’s founding campus, the Chesapeake Biological Laboratory in Solomons, Md.

Miller, who also serves on the Chesapeake Bay Stock Assessment Committee, said the shortage would have made more sense if it had come around September, when the juvenile crabs grow big enough to enter the fishery.

“I would have expected those effects not to really come until the second half of the season,” he said.

Bill Sieling, executive vice president of the Chesapeake Bay Seafood Industries Association, complained that “everybody’s trying to make a big deal about the supply of crabs,” but he said there’s an easy explanation: “There’s good years and bad years.”

“There’s no exposé to be found, and there’s no evil person behind this or anything,” Sieling said. “Crabs are scarce this year because crabs periodically have been scarce, and prices are high because everybody wants to buy crabmeat here.”

The shortage is affecting buyers and sellers alike throughout the sprawling Chesapeake Bay, the nation’s largest estuary.

“When you sell crabs and there’s not very many of them, it makes it tough,” said Aubrey Vincent, who operates Lindy’s Seafood on Hoopers Island. “It’s just one more challenge on top of the other challenges we’re kind of dealing with.”

“Between labor shortages and dealing with COVID, there’s a multitude of different challenges going on, and now we don’t have enough product either,” she said.

In Maryland, where the blue crab is the official state crustacean, many are simply doing without what has become a high-end luxury food they cannot afford this year.

“With the Chesapeake Bay like this, most people canceled their crab feasts,” said Bill Paulshock, the owner of Bill’s Seafood and Catering Co. in Perry Hall, Md. “Listen, this affects everyone. Right now, a bushel of crabs is about $75 to $100 more than they were this time last year. … You’ve got to remember every area of the bay is different, but crabs are expensive.”

Paulshock, who began his business in the back of a truck 42 years ago when he was only 17, said a pound of jumbo lump crabmeat that he sold for $24.95 in 2019 now goes for $49.99, but that has not translated into higher profits.

“We’re really giving the jumbo lump away at cost,” said Paulshock, who also represents retail buyers on the Maryland Department of Natural Resources’ Blue Crab Industry Advisory Committee. He said he’s keeping it on his menu even though it’s not a moneymaker for one reason: “I’m not going to let one slack year make me lose my customers.”

“This year, we’re taking a critical hit — it’s kind of scary,” Paulshock said. “Of course, everybody in this industry’s worried.”

In the ongoing search for answers, some think climate change could be the culprit. With warming waters, blue crabs native to the Atlantic have even been discovered on European shores in recent years.

“We’re all seeing drastic temperature weather changes and a lot of shifts in Mother Nature,” Paulshock said. “Is it the weather? Yeah, I think it is.”

But Miller disputes that theory. He said water temperatures in the Chesapeake Bay have increased by 4 to 5 degrees Fahrenheit since 1938, but he believes the warmer water could increase the species’ winter survival rate by 20% by the turn of the century.

“If anything, blue crab will be one of the winners out of the climate change scenario,” Miller said. “The waters have definitely warmed, but I don’t think that’s the issue for crabs. There’s also been some suggestion that lower oxygen might constrain the habitats that they can use, but this is supposed to be a year when low oxygen is not severe.”

Sieling offered another possibility: Blue catfish introduced to the James River for sportfishing by Virginia officials years ago might have disturbed the ecosystem and now are eating too many crabs in the Chesapeake.

“It was supposed to be a big sportfish — unfortunately, these fish have a voracious appetite, they eat everything,” Sieling said. “That’s one possibility, but we don’t know that for a fact.”

Paulshock said many watermen are also retiring, some of them cashing in on high land prices instead of transferring their property to their children or other family members.

‘It’s all going to come together’

Despite the many problems, hopes run high that 2022 will be a better year.

“Here’s the story: Last year we had more crabs than we could process by a long shot, and this year we can process them but we don’t have the crabs,” Sieling said. “One of these days, it’s all going to come together. … Let’s hope this year is an anomaly and not the norm. That’s what we always say.”

Paulshock said he has no doubt the crab population will improve.

“Do I think they’re going to come back? A hundred percent,” Paulshock said. “The Chesapeake Bay, they’re doing more things to keep it cleaner, it’s a perfect environment for them. … It’s just Mother Nature, the way the wind blows. If we get the right wind and the right current, this bay will be loaded with them.”

In the meantime, Paulshock said, the fluctuating prices have made it particularly difficult to plan for his catered events this summer, since tickets are often sold three to four months in advance.

“We feed the masses, whether it be a church group that has 100 people for a crab feast or a VFW that has 300 people,” he said. “We have to predict what crabs are going to cost six months, eight months before they’re even caught.”

Farrell said it was a difficult decision to pull the top-selling item from the menu at Clyde’s restaurants but added that “we just felt the time was right.”

Along with the high prices, he said the company wanted to take crab off the menu last month for conservation reasons, to “allow some type of recovery process” for the species. He said “there’s also a good number of people” in the food industry who have decided to remove crab from their menus for similar reasons.

“It’s been one of the poorest years on record in the Chesapeake Bay — people have been paying north of $200 a bushel for crabs,” Farrell said. “But it’s been a very poor year not only in the Chesapeake Bay, but off the North Carolina coast, which is a big crab producing area, and also in the Gulf of Mexico, in Louisiana, Mississippi, Alabama, states like that that produce a lot of crabmeat.”

So far, he said, the reaction from diners has been generally positive, although he said some have been disappointed.

“No one has been so vocal to the point where they don’t understand our rationale — we’ve put a little blurb on our menu indicating the reason for it, the conservation and the cost,” Farrell said. “But our corporate chef also came up with a great shrimp-cake recipe.”