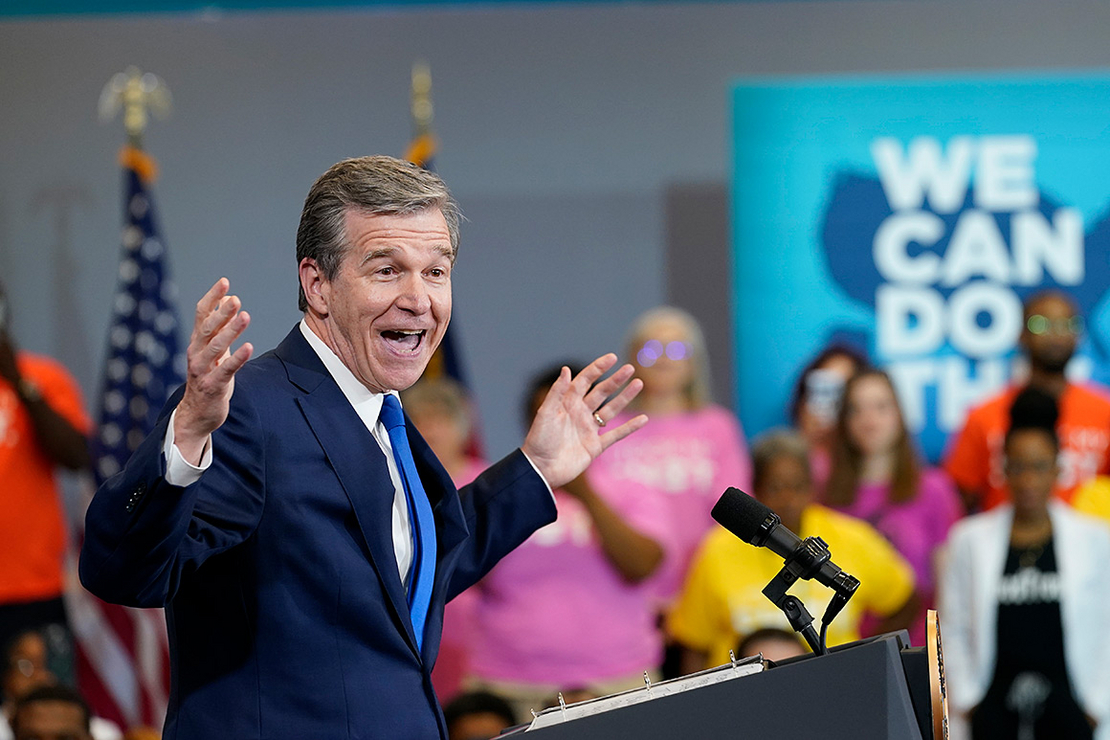 This story was updated Oct. 7.

North Carolina’s Democratic governor and its Republican-controlled Legislature have reached a deal on a sweeping energy bill that could dramatically boost renewable electricity in the state.

The bipartisan-backed legislation, years in the making, is designed to slash the Tar Heel State’s carbon emissions 70 percent by 2030 en route to reaching a 2050 net-zero goal.

The compromise bill, the result of negotiations between Gov. Roy Cooper (D) and state House and Senate leaders, sailed through two key Senate committees yesterday and could soon be on the chamber’s floor.

If enacted, the measure would help Cooper achieve his aggressive clean energy goals outlined in a 2018 executive order and set up a rate structure for electric utility giant Duke Energy Corp. that is likely to satisfy Wall Street.

“We will be one of the few states in the country that will actually put our clean energy goals into law,” said state Sen. Mike Woodard, a Democrat from Durham, shortly before the Senate Agriculture, Energy and Environment Committee overwhelmingly approved the measure.

The legislation must return to the House for approval before going to Cooper, who has signaled he will sign it into law. North Carolina is the first Southeastern state to set net-zero carbon goals (Energywire, Sept. 30, 2019).

“This bipartisan agreement sets a clean energy course for North Carolina’s future that is better for the economy, better for the environment, and better for the pocketbooks of everyday North Carolinians,” Cooper said in a statement. “I am encouraged that we have been able to reach across the aisle to find a way forward that will update our energy systems while saving people money and doing our part to slow climate change.”

The Senate’s version of H.B. 951 is slimmer than the 47-page bill that passed the House in a rare midnight session in July. The controversial measure, which stemmed from monthslong negotiations with industry and clean energy groups, called for the power sector to cut emissions 61 percent below 2005 levels by 2030, which fell short of the governor’s goal (Energywire, June 17).

The House version also would have renewed solar programs, encouraged nuclear development and mandated an all-of-the-above energy strategy, including natural gas — to the chagrin of environmentalists and progressive Democrats concerned about methane emissions.

Democrats, including Cooper, and a wide range of consumer, environmental and energy groups argued that the House bill did not go far enough to advance the state’s clean energy goals and that it would strip key ratemaking and energy planning authority from state utility regulators.

The Senate version restores that responsibility to the North Carolina Utilities Commission and would require that the least-cost, most reliable electricity be chosen to power the state’s grid, opening the door to a wide range of fuel choices.

For Duke Energy, the state’s largest utility company, the bill would allow for refinancing certain coal plant costs through low-interest, ratepayer-backed bonds. The financial method, called securitization, is growing in popularity across the electricity industry as utilities close down fossil fuel plants early to replace them with cleaner sources of fuel.

The legislation would also create a multi-year rate structure for Duke, allowing the utility to recoup the costs of its investments without having to seek annual approval from regulators, and would decouple, or break, the link between the company’s revenues and energy consumption — something that has been a significant barrier to the clean energy transition.

“This charts a course for our future, for cleaner energy and carbon reductions, while balancing reliability and affordability,” said Kendal Bowman, Duke’s vice president of regulatory affairs and policy, during the Energy Committee meeting.

Like most major electric companies, Duke has carbon-neutral goals of its own. North Carolina utility regulators continue to review its long-term energy plan, which critics say leans too heavily on natural gas (Energywire, Oct. 13, 2020).

Wall Street analysts were broadly pleased with the legislative breakthrough. For years, Duke has asked state lawmakers and utility regulators to modify its rate structure to support the Charlotte, N.C.-based company’s multibillion-dollar plan to modernize its power grid.

“A bipartisan bill with minimal [Duke] involvement was probably the best-case outcome here, as it should squash concerns that this was a ‘Duke funded’ bill,” analysts from Guggenheim Securities wrote in a research note on Monday.

Not everyone was happy. Representatives from the North Carolina Justice Center, Advance Carolina and the Carolina Utility Customers Association remained concerned about the impacts the bill would have on customers’ wallets — particularly those who already are struggling to pay their monthly bills.

La’Meshia Whittington, deputy director of independent nonprofit Advance Carolina, cited utility data showing that upwards of 500,000 residential electricity customers were behind on their bills during the pandemic.

“Instead of seeking ways to alleviate this financial hardship on communities, Duke Energy is seeking to pass HB951 which further entrenches its power on the backs of working-class North Carolinians,” said Whittington, whose group aims to build Black political and economic power in North Carolina. “We need solutions for our communities, not a mega-corporation extracting further what little we have to give.”

The state’s electric cooperatives, retailers and chamber of commerce were among those that have publicly backed the bill.

“This forward-thinking bill is the all-of-the above thinking that we need,” said Peter Daniel, government affairs director for the North Carolina Chamber.

Sen. Paul Newton, a Republican from Mount Pleasant, carried the bill through both committees. He touted, among other things, the ability to attract and retain businesses with clean energy goals and defended the proposed rate structures, which he said would protect all customers.

“We can’t do any better from a policy perspective to ensure that our grid will be built out at least cost,” Newton said.