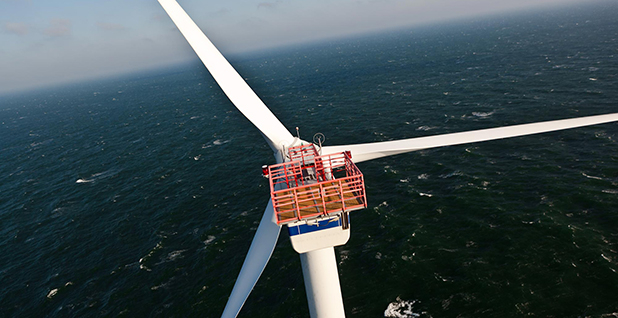 New Jersey could become the first state in the nation to build a transmission network serving multiple offshore wind farms, after state regulators and grid officials announced a call for proposals for the project yesterday.

In an order approved unanimously, commissioners at the Board of Public Utilities asked regional grid operators to help evaluate ideas for an "open-access" system built by a third party that could bundle together power generated by multiple turbine projects and feed it into the onshore grid.

The step marks the closest any U.S. state has come to planning a grid overhaul to accommodate a massive influx of offshore wind. New Jersey has a goal of generating 7,500 megawatts of power from offshore turbines by 2035, second only to New York nationally.

Several other East Coast states have studied the possible benefits of a similar multiproject approach to transmission, but none has asked developers to submit ideas. Massachusetts came to the brink of jump-starting solicitations before backing off, saying in October that the risks outweighed the benefits, at least for the time being.

U.S. developers have largely resisted efforts to give a third-party transmission company control over getting turbines’ electrons to shore, saying that if new power lines were to hit construction delays, it could leave finished turbines in the lurch. States have in every case awarded turbine developers the right to transmit their electricity to shore, in addition to producing it.

But industry advocates think a more collective approach will be necessary over the long run, given the limited number of connection points capable of handling big volumes of offshore power. One such group, the Business Network for Offshore Wind, applauded New Jersey’s move, saying it would save ratepayers money, improve grid stability and minimize environmental risks associated with power cables.

"New Jersey is once again setting the bar in its offshore wind endeavors," said Brandon Burke, BNOW’s director of policy and outreach.

Staff at the BPU suggested four possible sites where an open-access transmission network could link to the onshore grid. Transmission developers could build new onshore substations and offshore collector platforms, and potentially connect those platforms via a single statewide "backbone," according to the order.

Officials stressed that they would evaluate but not necessarily award contracts to a transmission project, with the window for proposals opening in the first quarter of 2021.

"To date, we have really yet to quantify the cost of the transmission" needed for offshore wind, said Commissioner Diane Solomon. "I still harbor some reservations."

Under an existing Federal Energy Regulatory Commission rule, states can get their own policy goals included in grid operators’ expansion planning processes as long as they field the associated costs. That has never been done until now, but might now happen in New Jersey, said officials at PJM Interconnection and BPU.

"Normally what we do is look at transmission expansion for reliability, for the entire grid, on a periodic basis. But this is specifically looking at an expansion to meet the policy objectives for NJ," said Manu Asthana, president of PJM, on an afternoon press call.

In accordance with the BPU’s order, New Jersey’s ratepayers would shoulder the cost of any transmission project selected under the solicitation. And FERC would need to sign off on any such project, said the officials.

State officials left open the door to cooperation with neighboring states on a regionwide transmission backbone. "If other states join and we end up with a regional grid [for offshore], then everyone’s better off," said Abe Silverman, general counsel at the BPU.

Commissioner Bob Gordon predicted that if the state ultimately decided to pursue a transmission backbone, it "may well become the nexus, the centerpiece of the Mid-Atlantic offshore wind industry."

"I do think when we look back on this moment, it’ll be viewed as a historic moment," he added.