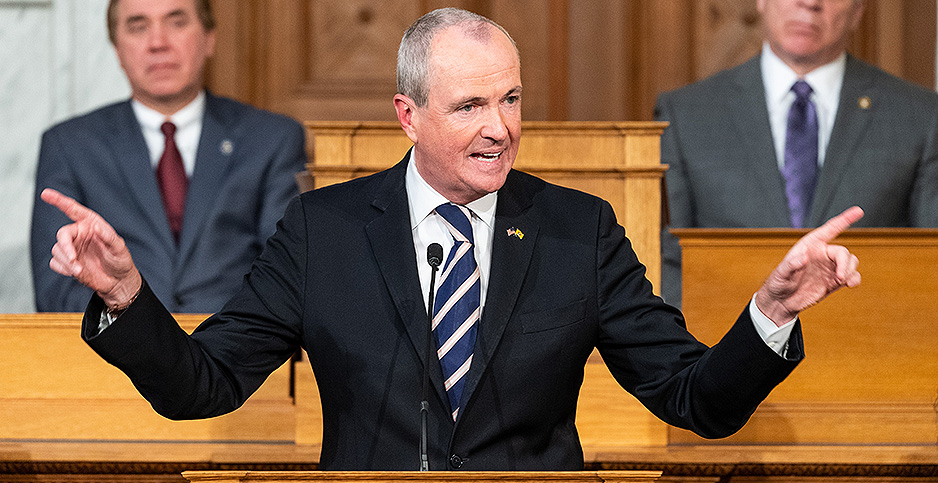 New Jersey Gov. Phil Murphy (D) yesterday unveiled a road map for decarbonizing the state’s energy system by midcentury, despite concerns about costs and effectiveness of the proposal.

The nearly 300-page energy master plan, first released in draft form over the summer, outlines the strategies that would get the state to 100% "clean energy" by 2050 — a term likely to include nuclear and potentially fossil fuel generation.

Strategies within the plan include the electrification of transportation and buildings’ heating and cooling systems, a mass build-out of offshore wind turbines and solar panels, and measures to slash energy consumption.

It also recommends preparations to phase down natural gas, calling on utilities to "assess existing pipeline capacity and plan for a gradual reduction in system use," and calls on the state to revisit policies that "bolster the natural gas industry."

At a presentation yesterday at Stockton University near the resort town of Atlantic City, Murphy and administration officials framed the master plan in local terms, saying it would help mitigate the long-term consequences of climate change for the tourism-dependent Jersey Shore.

Already, they noted, waters along the New Jersey coast will rise over a foot by 2030 and more than 2 feet by 2050, according to a recent study from Rutgers University scientists.

"These numbers are, at this point, baked in," said Catherine McCabe, commissioner of the New Jersey Department of Environmental Protection (DEP).

In an executive order signed during the presentation, Murphy also directed his environmental officials to draw up sweeping regulations and programs for greenhouse gas emissions reductions, giving them two years to do so.

The rules would establish an official program to monitor and ensure reductions of all sources of emissions in the state and charge DEP with prioritizing emissions reductions when permitting any new project.

One of DEP’s areas of permitting authority is land use, which would appear to bring new building developments under the scope of climate-centric rules.

"This unprecedented suite of regulations draws a line in the sand against climate change," said Murphy.

"If a proposed project does not align with our broader efforts" on climate, "it will either need to be amended or it will not be approved," he added. "No other state has as comprehensive a test."

The order is partly intended to make permanent the present administration’s work on climate.

New Jersey has left its own ambitions unattended before. One 2007 law called for the state to cut economywide emissions 80% by 2050, though officials did little to follow up over the subsequent decade.

The release of the energy master plan has also generated skepticism from various corners of the state’s energy sphere.

One concern stemmed from the transition’s cost to ratepayers — an analysis that officials in the Murphy administration said would be carried out later this year.

In an op-ed published yesterday before the road map’s release, Rutgers professor Frank Felder cautioned that the transition would be "expensive and regressive" and predicted a "substantial increase" in residents’ energy costs.

Felder, who directs the university’s Center for Energy, Economic and Environmental Policy, called for the state to look deeply into the master plan’s effect on rates, employment and gross state product, adding that the government should create an independent body to grade its implementation of clean energy goals.

One consumer advocate with ties to natural gas interests, the Consumer Energy Alliance, said yesterday it was "carefully reviewing" the master plan. Residents in the state, it added, should be "concerned" that the costs of the transition hadn’t been analyzed earlier on.

Erick Ford, executive director of the New Jersey Energy Coalition, praised the road map’s ambitions but expressed reservations about whether the plan would allow natural gas to retain a place in the mix. The nonprofit’s members include major electric and natural gas utilities in the state, construction and engineering firms, and other energy industry groups.

"While I haven’t read the whole document yet, I do understand there’s a desire to get that 100% clean energy, so that would mean things like natural gas may not be in the long-term future," he said during an interview yesterday on the sidelines of a grid resilience conference in San Antonio. "I’m cautious on it, because natural gas is a low-cost energy fuel."

Opinions were split among environmentalists, particularly on the road map’s ambivalent treatment of natural gas.

"Importantly, it doesn’t predict the future, it provides analysis and strategies for New Jersey to create the future in a responsible manner," he said in a statement.

Other greens were unhappy with the lack of an explicit end to expansions of gas plants, pipelines and other infrastructure.

Jeff Tittel, director of the New Jersey chapter of the Sierra Club, noted that the document "does not call for a moratorium on new fossil fuel projects" or a 45% emissions reduction by 2030 — a mark prescribed, on a global scale, by U.N. scientists in a 2018 climate report.

Matt Smith, state director of Food & Water Watch, said the state needed the governor to declare an immediate halt to all fossil fuel projects instead of waiting for environmental officials to create new emissions regulations.

"We can’t wait another two years," he said.