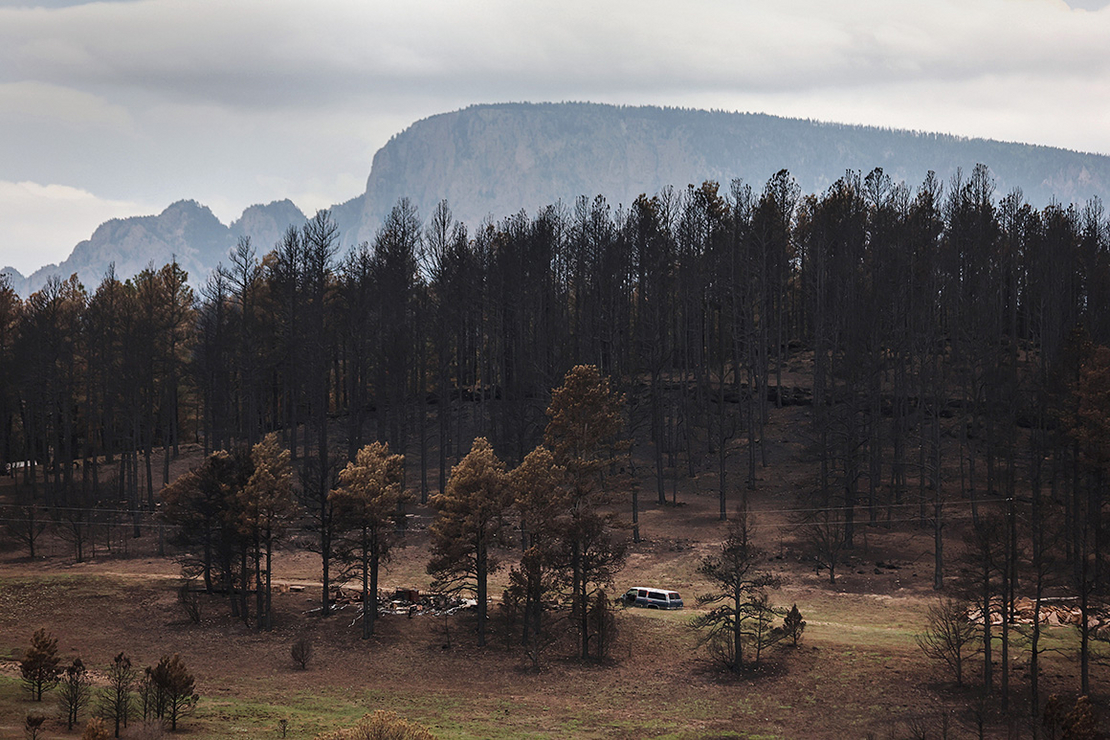 Trees stand after being scorched by the Hermits Peak/Calf Canyon Fire on June 2 near Las Vegas, N.M. Mario Tama/Getty Images

Prescribed fire will be a critical part of managing national forests in an era of climate change but needs closer supervision, a Forest Service task force said.

The task force, convened in May by Forest Service Chief Randy Moore, said in a set of recommendations Thursday that the agency needs to boost training in the use of fire, especially in the drought-prone West, to avoid further disasters like the prescribed burns that escaped control last spring and became raging wildfires.

And in addition to such short-term measures, the report raised other ideas for future consideration, such as easing some requirements of the Clean Air Act to encourage prescribed fires where the creation of smoke might otherwise be complicated by the pollution law.

Moore, in a statement included in the report, vowed quick action on the shorter-term recommendations, saying the Forest Service would devise a national strategic plan for prescribed fire — and dedicate funding to the purpose — by Dec. 15. He said the agency will develop a strategy, too, for establishing crews dedicated specifically to “hazardous fuels” reduction in national forests, which can include thinning of vegetation as well as prescribed fire.

And by the beginning of next year, Moore said, the Forest Service will create a Western prescribed fire training curriculum in collaboration with other agencies, modeled after a similar national training program based in Florida. That effort may require additional staffing, he said.

With the release of the report, Moore said he was lifting a pause on prescribed fire that he imposed last May.

A Forest Service inquiry revealed that a prescribed fire gone astray caused the Hermits Peak Fire last April (Greenwire, June 22). That blaze combined with the Calf Canyon Fire, which had started with the planned burning of piles of forest debris. Together, the fires burned 341,735 acres, the biggest wildfire the state has seen. Hundreds of homes were destroyed.

“We can never guarantee that prescribed fires won’t escape because there are risks when we use this tool,” Moore said. “It’s a trade-off we have to take seriously together with communities. The alternative is more large and destructive wildfires like we have seen the past several decades — a result of the combination of overgrown forests, climate change, a growing number of homes in the wildland-urban interface, and more than a century of fire suppression.”

The vast majority, or 99 percent, of the 4,500 prescribed fires the Forest Service lights each year go according to plan, Moore said. The agency uses them primarily in the South, however, where the practice has been long established and dry conditions from lack of rain aren’t as great a concern.

Using more fire in the West would help forests that have adapted to it over centuries — but which have grown crowded from years of fire exclusion by forest managers, supporters of the practice say.

While the task force report emphasizes the need for proper care in prescribed fires, it doesn’t step away from the practice. Rather, it embraces fire as a management tool and suggests ways the agency could make it more appealing to the public, and public authorities, who worry about smoke and other risks.

“Prescribed burning will be key in treating landscapes to reduce the risk of catastrophic fire to the American people and to the public lands entrusted to Forest Service care. The agency has to do the work — but it has to do it right,” the task force said in an executive report.

Many of the recommendations could be implemented immediately or over several months, the report said. Those include improved communication within the agency, tighter controls on projects and closer evaluations of the ground conditions before proceeding with projects, as well as ensuring that remote weather monitoring is accurate and taken into consideration.

Those could including consulting with EPA on exemptions from the Clean Air Act in certain areas to allow prescribed fire, the report said, adding, “The Forest Service needs to have more tools available for prescribed burning, including a more efficient environmental analysis and regulatory process.”

The Forest Service could also propose to the Council on Environmental Quality, a White House agency, an “alternative arrangement request” to exempt prescribed fire planning requirements under NEPA in “high priority landscapes,” the report said.

Although the report encourages the use of prescribed fire, one advocate for the practice told E&E News on Friday that he worries the Forest Service may be adding layers of bureaucracy.

The report’s emphasis on promoting fire as a tool was comforting, Ingalsbee said. But he added that one related practice that’s increased dramatically — “back fires” lit to influence the behavior of wildfires already in progress — received little attention.

Last spring’s mishaps brought a wave of criticism to the Forest Service on its use of fire, but most lawmakers say they support prescribed fire — usually conducted after some thinning of vegetation — as a way to prevent bigger wildfires in the future. Sen. Ron Wyden (D-Ore.) is the lead sponsor of legislation requiring more burns in cooler, wetter seasons.

Wyden said in a statement to E&E News, “We’ve got to end this cycle of devastation, and prevention work like prescribed burns is the name of the game to end this uncertainty and worry.”

He added, “I hope that by increasing education and coordination among agencies, the Forest Service will be able to get the work we so desperately need done, while also making sure our communities aren’t hurt in the process. The status quo just isn’t cutting it.”

After the report’s release, a spokesperson for Westerman told E&E News, “It’s good to see the Forest Service finally recognizing this as a serious issue, but it is also the bare minimum after the Hermit’s Peak Fire.”

She added, “Our members are going to continue our oversight and the implementation of this report to ensure USFS can increase the pace and scale of active management in a safe and effective way.”