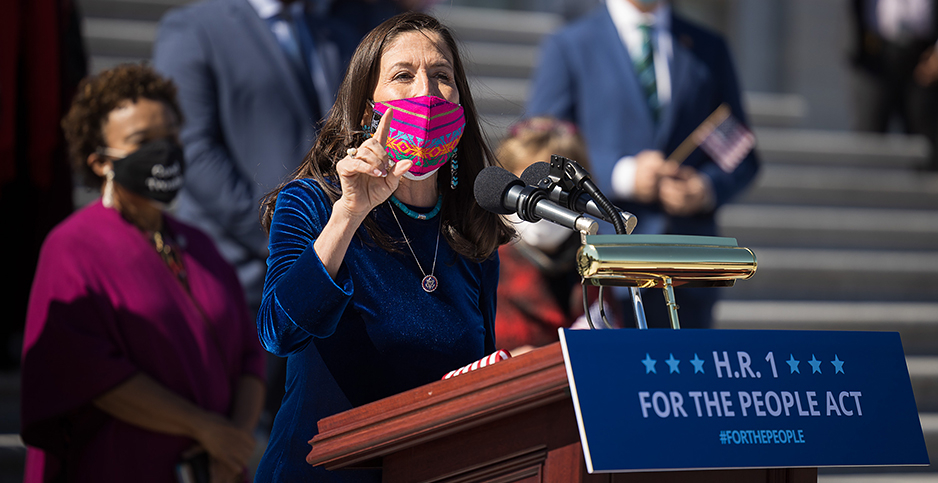 New Mexico Democrats in Congress don’t plan on signing on to legislation sponsored by their lone GOP colleague, Rep. Yvette Herrell, that would respond to the anxiety about their state’s transitioning energy economy by exempting it entirely from President Biden’s pause on new leases for oil and gas drilling on federal lands.

They are, instead, setting out to offer their own bills and policy proposals that they hope will satisfy multiple constituencies — the environmentalists who want to limit fossil fuels and the fossil fuel workers who fear for their livelihoods — without the risk of alienating the new Democratic administration.

In interviews with E&E News last week, Sen. Martin Heinrich and Rep. Teresa Leger Fernández each confirmed they were in the process of drafting legislation to ensure New Mexico is not left in the lurch if the federal government pursues aggressive new actions to curb harmful emissions that contribute to climate change.

Curbing federal oil and gas development will inevitably shrink the industry in New Mexico, where more than half of wells are federal. The state depends on the industry for both jobs and revenue to fund public education.

Sen. Ben Ray Luján said that while he was not working on one specific bill, he saw several policy areas to explore that could address some of the uncertainty in the Land of Enchantment.

Their overtures all come at a time of intense disagreement over the immediate effects of the administration’s temporary order that drilling decisions be cleared by top brass, along with a moratorium on new leasing that sunsets with the release of a climate analysis of the federal oil program.

The debate will take a new turn in the aftermath of the Interior Department’s virtual public forum on Thursday on the future of the program, which will, incidentally, be overseen by Interior Secretary Deb Haaland, who was until just days ago a New Mexico Democratic congresswoman (E&E News PM, March 18).

Critics of the moratorium on new leasing say the damage is already being done in New Mexico, the largest federal onshore oil producer in the country.

Those more sympathetic to changes to the federal oil program have criticized alarmist rhetoric suggesting pink slips are being issued in overdrive and schools are on the verge of shutting down (E&E Daily, Feb. 8).

The debate has also, predictably, become political, with Republicans accusing Democrats of embracing a shortsighted and ultimately damaging energy platform. Democrats in oil-producing states are, in turn, left to navigate the partisan tensions.

The work being done by Heinrich, Leger Fernández and Luján represents the very early stages of efforts to navigate these tensions while also trying to meet the very real challenges that lie ahead in their home state.

Heinrich, the senior senator in the delegation, is finalizing legislation that would proactively assist in New Mexico’s transition away from an oil- and gas-producing state.

"It’s coming together," he said in a brief interview on Capitol Hill last week. "We’re still working on it. It’s not quite ready for any introduction yet, but we’re further along."

At one point, Heinrich had been mulling the creation of a program for New Mexico that would be modeled on the Secure Rural Schools Act, which was enacted in 2000 as a way for jurisdictions that have traditionally relied on timber sales to continue receiving education funding despite the industry’s decline on federal lands.

In a follow-up statement to E&E News, Heinrich suggested that framework might be expanding. He said he would soon be putting forth "the authorizing legislation required to secure a smooth transition for our state’s economy and workforce," which would include "concrete solutions to help states like New Mexico become more independent while making sure our next generation continues to get the education they deserve."

That bill, he said, would touch on "planning for state revenue replacement and targeted, place-specific programs for career re-training, economic diversification and transition."

Across the Capitol, Leger Fernández told E&E News she was working on a number of proposals that could either be introduced as stand-alone bills or offered as components of the major infrastructure package congressional Democrats want to pass in the coming months.

One concept she’s exploring is the creation of what she called the "Route 66 of renewable energy," or high-powered transmission lines to carry wind and solar power generated in rural areas of New Mexico to population centers elsewhere in the West in need of clean power.

"New Mexico needs a ‘green grid,’" Leger Fernández explained. "We have this enormous potential for wind and solar electric generation — that’s old; people talk about that all the time — but we need to get it where it’s needed most."

The congresswoman said, "We need to create a Route 66 of renewable energy where we can get more electricity generation and our sun-drenched, windy state to help fuel the national grid."

Couple that, Leger Fernández continued, with more funding to ensure there are adequate systems in place to transport the new technology to businesses.

Luján, whose election to the Senate in 2020 paved the way for Leger Fernández to win his old House seat, said he was enthusiastic about the freshman congresswoman’s ideas when asked for his thoughts on addressing New Mexico’s predicament.

"[She’s] looking at infrastructure investments and workforce investment programs in New Mexico as it relates to ‘Build Back Better,’ and I think that is a very strong approach, and it’s something that we are looking at," he said. "I’ll be working with Teresa Leger Fernández with her advocacy surrounding that legislation she’s putting together."

It remains to be seen what the legislative path looks like for any of these proposals, and how they will be received politically.

The strongest allies of oil and gas have contended that none of these initiatives would replicate the strong position New Mexico currently finds itself in as a fossil fuel-producing state.

"Even green energy jobs [are] not going to backfill the oil jobs lost in the energy sector, and certainly it’s not going to be able to compete with the salaries that, quite frankly, our families and our oil field workers are able to provide and receive," Herrell argued in an interview last month.

But Heinrich, Leger Fernández and Luján frame their support for an energy transition not as something they asked for but something that’s inevitable — something that must be acknowledged and addressed with thought and care before it’s too late.

"Confronting the climate crisis and transforming our economy will not come without costs," Heinrich said last week. "I have the backs of our energy veterans … New Mexico workers will not be left behind as we transition to a more diversified economy based on clean energy and a carbon-free future."

Heinrich and Luján both sent letters to the Biden administration earlier this month asking that the oil program climate review be carried out rapidly and lease sales resumed, as New Mexico has not yet figured out a long-term strategy to recoup jobs and revenue that would be lost not now but in the future (Greenwire, March 10).

Leger Fernández told E&E News that there was a mandate from inside New Mexico to not only prepare for an energy transition but facilitate one. That is, it’s not just the Biden administration or progressive Democrats on Capitol Hill who are setting the course for this major change in her state.

Calling her state "ground zero in the climate crisis" with its periods of debilitating droughts, Leger Fernández said climate change was a key issue in her 2020 campaign and something she continues to hear about back home.

"My constituents live this issue. Impacted by drought, and they are concerned about the fact that the snowpack is so thin this year. And they are also concerned about having good jobs," she said. "They understand that from the ground up."