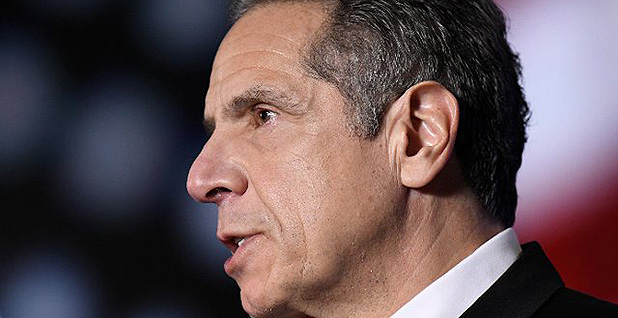 New York Gov. Andrew Cuomo (D) announced the largest-ever award of offshore wind contracts by a U.S. state yesterday as part of a broader plan to scale up renewable power over the next decade.

The announcement came in the third installment of a multiday series of State of the State speeches from Cuomo, who called the energy transition a "prime economic opportunity and a pressing moral imperative." The state has a mandate of procuring 70% of its power from renewables by 2030 and 100% from carbon-free sources by 2040.

Two offshore wind projects proposed by Equinor and BP were selected by energy officials to produce nearly 2,500 megawatts of power. Known as Empire Wind 2 and Beacon Wind 1, the projects would provide electricity for over 1 million homes, according to the companies. They would add to an existing venture, Empire Wind 1, being pursued in New York by the two oil and gas majors.

Anders Opedal, CEO at Equinor, called the newest awards "a game-changer for our offshore wind business in the U.S."

Officials at the New York State Energy Research and Development Agency said the two new projects would create more than 5,200 jobs. Some of those might involve training at an offshore wind institute hosted by two state colleges, which is aiming to prepare about 2,500 workers for industry jobs.

Equinor also won the rights to remake two ports located in Albany and Brooklyn. The first will host the country’s first facility to manufacture offshore wind turbine towers, while the Brooklyn site will be used as a base for assembling the turbines and maintaining them once they’ve been installed.

The port upgrades will draw from up to $200 million in state funds intended to help leverage matching amounts from the private sector. The Brooklyn port was a priority for environmental justice advocates and members of Congress, who have pushed for the largely inactive site to be converted into a renewable energy hub that would employ people from underserved neighborhoods nearby (Energywire, Nov. 13, 2020).

"This is a climate justice victory — this is what the industrial waterfront of the future looks like," said Elizabeth Yeampierre, an executive director at Latino community-based organization UPROSE and co-chair of the Climate Justice Alliance.

Overall, the state has so far issued approvals for close to half of its 9,000-megawatt goal for offshore wind, although those projects will still need to go through the thornier process of securing federal permits.

Cuomo also greenlighted new onshore solar and wind projects amounting to 2,200 megawatts, building on the 4,315 megawatts of large-scale renewables already in development in the state.

Gavin Donohue, president of the Independent Power Producers of New York called the announcement "welcome news" and an aid for the state’s economic recovery. The group counts fossil fuel companies among its members but has largely supported the state’s focus on solar and wind build-out.

The state’s unprecedented construction of wind and solar is central to its 70% renewables goal by 2030. As of 2017, about 28% of the state’s power came from renewables — and most of that was imported hydropower.

But the renewable push has produced backlash among some officials and residents in New York’s rural upstate, which is close to having a zero-carbon grid but will serve as the host for solar and wind generation for the fossil fuel-heavy New York City area. Another new initiative, announced by Cuomo in his speech, involves a request for proposals for transmission lines that would help transport power from upstate areas and Canada into the downstate region.

The Citizens Budget Commission did not respond to E&E News’ inquiries in time for publication. But its executive director, Andrew Rein, was questioned in a New York Post interview about how the costs of new infrastructure and transmission might affect New York’s multibillion-dollar budget shortfall.

"I think there’s a lot to know that we don’t know yet," he told the newspaper.