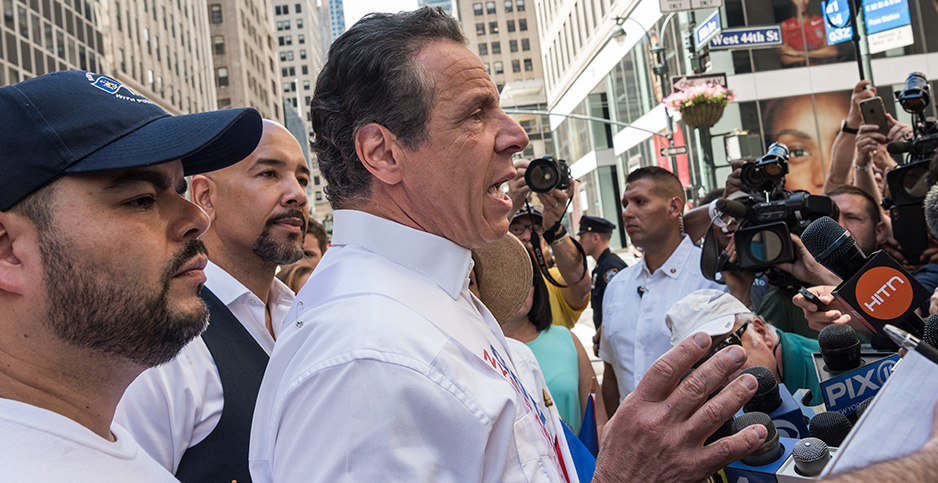 Gov. Andrew Cuomo (D) said yesterday he has reached an agreement with legislative leaders over a bill to slash New York’s greenhouse gas emissions, setting the stage for one of the most significant state climate victories since President Trump took office.

The announcement, coming just days before the close of the legislative session, represented a big victory for climate activists, who have spent three years pushing for major legislation to curb greenhouse gases in the Empire State.

Lawmakers were still working on final amendments yesterday, but the outlines of the deal were becoming clear. The legislation calls for reducing emissions by 40% from 1990 levels by 2030 and 85% by 2050. The remaining 15% of emissions would be offset, making the state carbon neutral. The bill would also require that all electricity generation come from carbon-free sources by 2040. A Climate Action Council would be established to ensure the state meets its targets.

"I believe we have an agreement, and I believe it is going to pass," Cuomo said in a radio interview on WAMC.

The comment ended months of speculation over the fate of climate legislation in New York. Democratic lawmakers, who seized complete control of state government when they took over the state Senate last fall, had been pushing a bill called the "Climate and Community Protection Act." The bill would spend 40% of the state’s clean energy revenues on energy efficiency measures and renewable installations in disadvantaged communities.

That drew repeated public objections from Cuomo, who said he wanted to ensure that environmental revenue was spent on environmental programs. Ultimately, the two sides settled on a compromise: At least 35% of revenues would go to disadvantaged communities. That funding could rise as high as 40%, which would amount to $370 million in fiscal 2018-19.

"This transformation to a new green economy is very expensive. We don’t have the luxury of using funding for political purposes."

But Democratic lawmakers forged ahead, working through the weekend to iron out a deal with Cuomo before a filing deadline for legislation Sunday. They argued that the risks of climate change, coupled with the benefits of a green energy economy, outweighed the potential costs.

"It means that on Father’s Day, when I see my grandchildren next year, I’ll have a lot less uncertainty about their future than I did yesterday morning," said Democratic Assemblyman Steve Englebright, a champion of the climate legislation. "It means we are going to be in the vanguard among states, tackling a problem that will affect every jurisdiction here and around the globe. New York will lead the way."

"Our constituents told us, ‘Don’t come back without doing something on climate,’" Kaminsky said. "The future is now. I think we’ve taken that important step."

Republican control of the state Senate meant climate policy in New York had been centered in the governor’s office until this year. Cuomo has pumped out executive orders banning hydraulic fracturing, calling for the closure of the state’s remaining coal plants in 2020 and targeting a 40% reduction in emissions by 2030, among other things.

The legislation enshrines many of Cuomo’s targets into law, ensuring they will outlast the current governor. The new Climate Action Council would be required to issue recommendations on how to install 6 gigawatts of distributed solar by 2025, 9 GW of offshore wind by 2035 and 3 GW of energy storage by 2030.

But the law also represents a power shift of sorts. Environmentalists have long criticized Cuomo for failing to follow through on many of his environmental objectives. His environmental agencies have yet to produce a climate action plan, despite an executive order directing them to do so. And his coal regulation arrived earlier this year, when only two coal plants remained (Climatewire, May 10).

The legislation ensures the governor will follow through, advocates said. It would require an annual greenhouse gas inventory. The Climate Action Council would release a report every four years detailing the state’s progress (or lack thereof) toward its emissions goals.

And by putting the state’s climate commitment in law, it would open the door for citizens to sue if New York does not meet its targets.

"This isn’t just a planning document. It is a policy mandate with teeth that they can’t evade or avoid," said Eddie Bautista, executive director of the New York City Environmental Justice Alliance.

The bill offers a model for how to pass climate legislation, he said. In a state where many communities of color struggle with pollution from traffic, power plants and garbage disposal, the environmental justice components of the legislation resonated with lawmakers.

Beyond the power sector

Liberal states had promised to act as a foil against Trump, who has attempted to roll back myriad environmental laws. Yet state efforts struggled during the first two years of Trump’s presidency. That changed, though, with the election last fall of a series of Democratic governors and state legislators across the country.

New Mexico and Washington both passed bills this year to decarbonize electricity generation by midcentury. Colorado passed a series of bills giving its regulators considerable power to green its economy. Maryland and Nevada have significantly boosted their requirements for renewable electricity production. And Oregon is nearing passage of a bill that would pave the way for it to join California’s carbon cap-and-trade system.

But the size and the scope of New York’s legislation has the potential to exceed those efforts. The state’s energy-related carbon emissions were ninth in the nation in 2016, according to federal statistics.

Unlike many of its peers, the Empire State is casting its gaze beyond power plants, the traditional realm of state climate policy. Transportation accounts for roughly a third of the state’s emissions, followed by residential heating and cooling (16%) and electricity generation (13%). The bill would direct the Climate Action Council to recommend emissions performance standards for the transportation, building and industrial sectors.

At the same time, the legislation leaves considerable questions regarding how New York intends to slash emissions. Much would depend on the Climate Action Council and the governor, who will ultimately be charged with implementing the legislation.

New York has considerable ground to make up. The state cut emissions only 8% between 1990 and 2015, according to the most recent New York greenhouse gas inventory.

Greens acknowledged the amount of work ahead but said they are optimistic.

"Now, for the first time, we actually have our commitment on climate enshrined into law," said Conor Bambrick, who leads the air and energy program at Environmental Advocates of New York. "That is going to allow for real long-term planning and action so New York can get serious about tackling this problem, serious about getting innovative about ways to tackle this problem and doing it equitably."