N.Y.’s plan to fast-track renewables could get ‘ugly’ 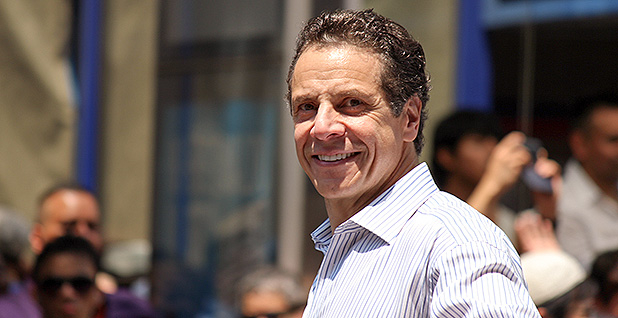 New York Gov. Andrew Cuomo’s plan to speed up approvals of renewable energy projects is launching the state’s climate ambitions into a new phase that could cause an uproar in rural communities.

The legislation, presented as an amendment to the Democratic governor’s budget on Friday, could be a bellwether for officials in other states looking to fast-track costly and often controversial energy developments to meet their own carbon-cutting goals.

At the heart of the New York bill is a plan to remove wind and solar power from the state’s traditional energy permitting process, developed for natural gas plants and approved by Cuomo almost a decade ago.

Wind and solar projects would no longer face scrutiny from the state’s environmental and utility regulators, instead receiving permits from a new office housed within an economic development agency.

But by trying to pave the way for developers, the governor’s overhaul could incense locals in several rural counties, many of them located near the shores of lakes Erie and Ontario or along the border of Pennsylvania. The bill must still pass both chambers of the Democratic-controlled Legislature.

Last week, county officials near Niagara Falls were considering ways to block vast new wind turbine projects, with one legislator lamenting that the state’s incentives for wind and solar were "destroying our communities," according to Niagara Frontier Publications.

Cuomo’s plan appears to be a formidable solution, he said. "I think it would be one of the strongest state-level renewable siting laws in the country."

New transmission infrastructure, cited by state officials as a critical way to bring upstate renewable power down to New York City-area centers of demand, would get streamlined treatment under Cuomo’s plan, within existing rights of way. And regulators would undertake a comprehensive study of the grid’s future distribution and transmission needs.

Developers, who have for years sought similar changes, reacted with delight to the bill’s unveiling, saying it would finally give New York a shot at achieving the goals of last year’s climate law. Under that law, by 2030, 70% of the state’s power has to come from renewable sources, and a decade later, all of it must be carbon-free.

The specific climatic needs of wind and solar often bring them into conflict with people in rural areas who aren’t used to hosting energy infrastructure, according to a January report from the Brookings Institution (Energywire, Jan. 21).

"Zoning has always been a local issue. If the state comes in and says, ‘For this issue, we can’t let you govern your own land use,’ that’s going to be ugly," said the report’s author, Samantha Gross, in an interview after the report’s release.

Another part of Cuomo’s plan would put the state in charge of planning where renewables and transmission should be built in the future.

Reynolds said most Alliance for Clean Energy New York members are "cautiously intrigued" by the idea but are first focused on getting their existing project proposals out of the state’s backlog and across the finish line.

"That’s really not helpful in a state where we’ve seen significant regulatory burdens in getting projects done," said Craig Gordon, Invenergy’s vice president of government and regulatory affairs, in a recent webinar hosted by the American Council on Renewable Energy.

"It’s unfortunate we have to deal with even more uncertainty with how projects are getting built and contracted," he added.

The new state office for "green energy siting" would prioritize repurposing brownfield and abandoned industrial sites. Based on Cuomo’s legislation, it would only come into play for renewable projects that haven’t been proposed yet.

Cuomo’s bill would seek to quickly get those through the queue by setting uniform permitting requirements based on industry norms.

It’s unclear whether conservation and environmental groups would view that as sufficient. The Sierra Club’s Atlantic Chapter and Environmental Advocates of New York did not respond to E&E News queries.

‘We can do better’

It also remains unclear just how far Cuomo’s plan would go to curb the influence of municipalities opposed to hosting wind and solar.

Towns would retain "an opportunity to advise the Office on compliance with local laws," said NYSERDA, but the new office for renewable permitting would consider those laws "in light of the State’s clean energy and environmental goals."

"Governor Cuomo is placing the value of building large-scale renewables above … the ability of rural residents to have a meaningful voice," she said.

Projects haven’t stalled due to a defective public input process, Kremer said. "It’s because they’re not good projects for New York state. They don’t fit for these communities."

Kremer said she approves of one feature of Cuomo’s plan: the governor’s pledge to build future projects on repurposed industrial sites.

Those areas would likely be closer to New York City and other hubs of electricity demand, making the state’s energy system leaner and more cost-effective, she argued.

"I’m hoping that maybe this [bill] is so outrageous that people might take a second look" at how the state plans to meet its renewable goals, she said.

"We can do better and still meet our goals. It doesn’t have to be one or the other."

"We believe that risk of financial harm to private corporations, or loss of federal tax credits, does not justify application of emergency rulemaking … in the name of the public welfare," they wrote.

On Feb. 13, the board — made up of the heads of five state agencies — voted to rescind the rule despite the objections. The state’s push to reduce emissions and deploy renewables "would be impeded" otherwise, it found.

The board’s decision reflected Cuomo’s vow in a recent budget address to "flip the whole model" of how renewables are sited.

"You can’t have the goals we have and then have a system of bureaucracy that takes five to 10 years to start a new energy project," he added. "It just does not work."