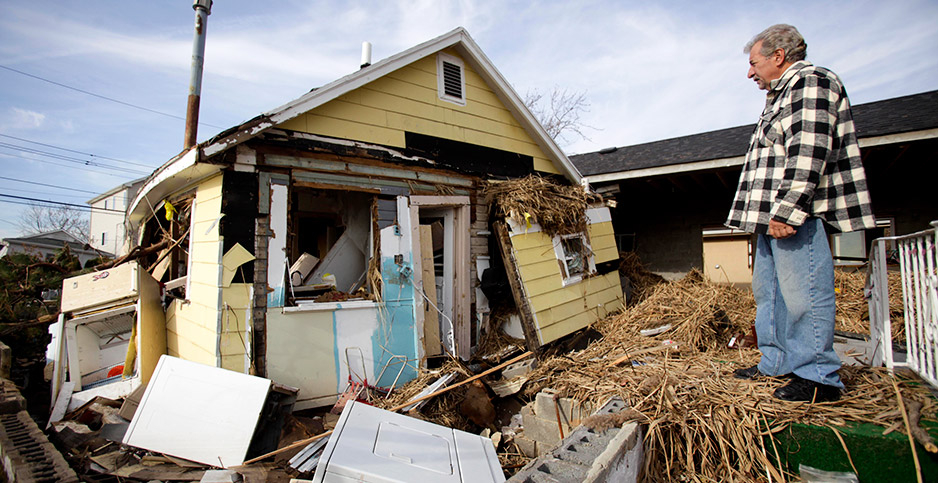 Superstorm Sandy in 2012 prompted a call in New York for the "best weather detection system in the country." Pictured: Joe Vanvaketis looking at his Sandy-damaged home in Staten Island in 2012. Seth Wenig/Associated Press

"I can’t tell you how frustrating and how dangerous it is not to have the accurate weather information on a timely basis," Cuomo, a Democrat, lamented. "We’ve been in situations where we’ve deployed equipment to the wrong end of the state, relying on weather predictions that turned out not to be true." He declared, "We want to have the best weather detection system in the country."

The Empire State got cash to do just that in 2014, when the Federal Emergency Management Agency awarded it $30 million to develop a weather tracking system.

That’s where Ken Crawford, a professor of meteorology at the University of Oklahoma, had pioneered a system to track the subtle changes of global warming and predict the extreme weather it can trigger.

He and a group of other Oklahomans had spent decades building a gridlike network of 120 automated reporting stations to report precipitation, temperature extremes, soil moisture and temperature, solar radiation and wind speeds, and other data every five minutes. They called it the "mesonet," a combination of the words "network" and "mesoscale" — referring to middle-sized weather events.

By the time New York officials showed up, Oklahoma’s mesonet was so accurate, quick and useful that other states had begun to copy it.

After almost two years of meetings to learn how Crawford’s system works, New York bought the state’s software system that polices Oklahoma’s quality control of weather and climate data. Now, New York boasts the largest and most sophisticated mesonet in the United States. It became fully operational early this year.

Crawford died in 2014 at age 71, but one of his former students, Jerald Brotzge, was hired to manage New York’s system.

The state is now home to a network of 126 automated stations about 25 miles apart, which replaced New York’s 27 older reporting stations. The locations allow them to detect events like smaller storms and droughts that often went undetected by older stations, which were clustered in some parts of the state and not present in others.

The new network has some major upgrades.

New York’s system now includes 17 more specialized mesonets that can measure carbon dioxide plumes and help indicate where man-made emissions have come from. That could help meet another of Cuomo’s goals, which is to cut greenhouse gases and shift to a higher percentage of renewable energy.

The emerging grid of trackers has sharply reduced the number of New York’s weather surprises and vastly extended the reach and immediacy of its reports. Under the old system, New York launched six radio-equipped weather balloons daily to report conditions in the upper atmosphere. Now, the pulsed lasers and other electronic sensors in the new system will provide 17 "vertical profiles" of weather events in the upper atmosphere every five minutes.

"That’s a game changer. There’s no such network like that in the states and arguably anywhere in the world," said Chris Thorncroft, chairman of atmospheric sciences at State University of New York at Albany, which oversees the system.

New York companies are interested in ways to use the new mesonet because the likelihood of damage from extreme rainfall has increased in the Northeast by more than 70 percent in 50 years. Thorncroft said he thinks public-private partnerships with companies will help his state maintain and improve its system. Texas, Pennsylvania and Taiwan have expressed interest in New York’s approach.

In March, a committee of the National Academy of Sciences concluded that the mismatch among various states’ capabilities presents a problem. The United States has made billions of dollars of investments in space satellites that measure greenhouse gases and other pollutants, but a lack of uniform sensors on the ground makes the space observations difficult to use.

"We’ve seen on numerous times where top-down and bottom-up measurements have been made and they don’t agree with each other," said James White, chairman of the committee and a professor of geological sciences at the University of Colorado, Boulder.

He wants better measurements of methane, a serious greenhouse gas emitted by gas and oil drilling and large cattle farms. Some states, such as California, have robust monitoring stations, he pointed out. "Other states don’t have anything. We think the federal government has a role here for providing continuity.

"If one state sets up a system and it’s incompatible with the others, then you’re not going to be able to pull all of these measurements together," he added.

White said his committee wanted a national network that was seamless, but he didn’t estimate the costs involved. "Certainly, the rationale for doing this is quite strong, and the cost is not prohibitive at all," he said. "There are a number of states that are proactive, and we want to be able to leverage that."

He added, "Another way of looking at it is: What’s the cost of not doing it?"

Resistance to a national system

Crawford had lobbied to get a national mesonet system in the mid-2000s by touting Oklahoma’s successes.

The former National Weather Service scientist traveled to Washington, D.C., to make his case. He tried to convince NOAA and Congress to build a national system like the one he built in Oklahoma but found that lawmakers, particularly Republicans skeptical of mainstream climate science, couldn’t stomach the cost of a national system.

He ultimately agreed to support a compromise that included an entity called the National Mesonet Program (NMP).

It is a NOAA and National Weather Service agency that’s now run by Curtis Marshall, another one of Crawford’s former students. He calls it a "central repository" of climate data. It provides $18 million in federal support to 44 state, local and business-run groups that have started their own tracking systems in exchange for NMP’s climate data, which the agency puts online.

A report last year by the American Meteorological Society counted 26 state-run mesonets, calling them "vital assets" that contribute a social and economic benefit that "far outweighs" their cost. The report noted, however, that some of the state systems that followed Oklahoma’s lead are still in the "formative stage," while others face budget cuts or need more help to "meet scientific requirements for data quality."

"You can always add more data and standardize and improve quality," he said. "I think we’re a whole lot farther than he [Crawford] thought we could get when he passed away."