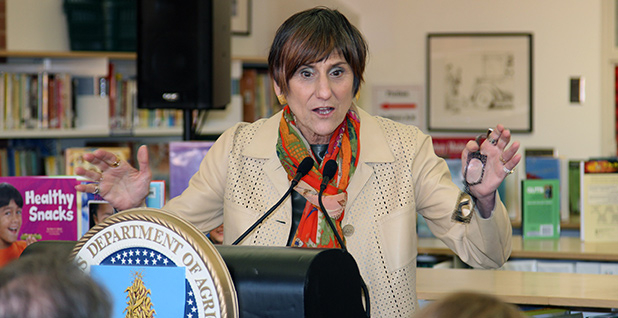 Connecticut Rep. Rosa DeLauro has been one of the loudest Democratic voices in pushing for an overhaul of the North America Free Trade Agreement. Department of Agriculture

With negotiations on a new North American Free Trade Agreement seemingly headed into the homestretch, lawmakers and interest groups on all sides of the political spectrum are stepping up pressure on the Trump administration for changes they want to see included in a revamped trade deal.

While the president has struck a generally pessimistic outlook for a new NAFTA for months, the talks have taken a more upbeat tone in recent weeks.

"We believe we are fairly close to a deal," Vice President Mike Pence said this weekend at the Summit of the Americas in Peru, where he met with Canadian Prime Minister Justin Trudeau and Mexican President Enrique Peña Nieto.

Trudeau in turn said the NAFTA talks had "a very positive momentum."

That’s an alarming development for environmentalists and allies on Capitol Hill, who fear the updated trade pact may worsen climate change by "locking in" carbon-spewing policies.

"NAFTA 2.0 could expand the damage of Donald Trump’s attacks on climate policies by giving fossil fuel corporations increased influence over environmental regulations, or by pressuring Mexico and Canada to mirror Trump’s regulatory rollbacks," Frank Ackerman, the author of a report released today by the Sierra Club; Greenpeace Mexico; and the Council of Canadians, a social justice advocacy group, said in a statement.

"Even if we are freed from Trump’s climate denialism in a few years, such NAFTA 2.0 proposals could prolong Trump’s polluting legacy for decades," they said.

That report details "obstacles to climate progress" in the current NAFTA, while raising concerns about changes floated by the administration.

Among the top concerns with the nearly 25-year-old pact is the "proportionality" clause, which generally prevents Canada from reducing energy exports to the United States without a corresponding reduction in domestic access to the same products.

"If Canada tries to meet its climate goals but remains bound by this NAFTA rule, the country will produce nearly 1,500 metric megatons more climate pollution by 2050 than if it ditched the rule," states the report.

The groups also take issue with NAFTA’s treatment of natural gas exports from the United States to Mexico, which are considered to automatically qualify as meeting the "public interest" test as enumerated under U.S. law, as well as the investor-state dispute settlement (ISDS) mechanism, which allows multinational firms to challenge domestic policies that they argue are discriminatory.

Maintaining ISDS in NAFTA "could delay or weaken the reestablishment of U.S. climate policies after the Trump administration leaves," states the report.

Of the current NAFTA talks, the groups express alarm that a revised NAFTA will enshrine Mexico’s recent market reforms for its oil and gas industry, which they note has encouraged more development of fossil fuels.

A rumored "standstill" rule "that requires the current oil and gas deregulation to persist indefinitely" could hamper future efforts by the Mexican government to limit greenhouse gas pollution, the report notes.

A future NAFTA should instead "require each country to enforce robust climate, labor and human rights protections, in line with the Paris accord and other international agreements," while eliminating both ISDS and the proportionality rule.

Eliminating ISDS and strengthening environmental protections are also among the ideas floated earlier this month by the Congressional Progressive Caucus.

On a conference call with reporters, Rep. Rosa DeLauro (D-Conn.) said liberals will fight for progressive ideals in a new trade deal, noting that the Trump administration has said it wants to garner bipartisan support for a revamped NAFTA.

"Any renegotiation of NAFTA must eliminate the incentives for outsourcing jobs, raise wages and level the playing field for American workers," DeLauro said, while noting that past opposition from a coalition that sank the Obama administration’s plans for a vote on the Trans-Pacific Partnership.

Ironically, liberals and the new administration may have found common ground on ISDS, which top Trump officials remain skeptical of (E&E Daily, March 22).

Meanwhile, congressional Republicans and like-minded think tanks are pressing the Trump administration to use the NAFTA talks to push policies that enhance American "competitiveness," including streamlining the permitting process for infrastructure and manufacturing facilities and further reducing regulations.

"We need to seize the opportunity to improve American economic competitiveness — including the competitiveness of the U.S. workforce — in a bold and ambitious way," wrote Sens. Ted Cruz (R-Texas), Steve Daines (R-Mont.) and Cory Gardner (R-Colo.) to Trump last month.

"Rather than focusing on making it more difficult for companies to invest in other countries," he said, "we should instead make it easier for them to grow and invest here in the United States."

The inclusion of a "competitiveness" chapter in a revamped NAFTA could include provisions that would address permitting and regulatory reform, including the "Regulations From the Executive in Need of Scrutiny (REINS) Act" or the "Regulatory Accountability Act" — both sweeping regulatory overhauls that have long been a top priority of industry.

Including such bills in a NAFTA rewrite has the added advantage of allowing the measures to bypass a Senate filibuster under the Trade Promotion Authority Act, which allows implementing legislation to pass by a simple majority.

"No alternative this year has so much promise to lock into law most elements of your economic development plan and timely realization of the economic benefits it will bring," wrote the senators.

A competitiveness chapter in the next NAFTA was roundly endorsed earlier this month by conservative groups, which were especially enthused about the mention of the "REINS Act," which would require new executive branch regulations with an annual economic impact of $100 million or more to be approved by Congress before taking effect.

Trump, noted the signatories, promised in 2015 to "work hard" to get the "REINS Act," S. 21, signed if elected president.

"The REINS Act is still vitally needed because if the regulatory process is not fixed, your highly successful pro-growth deregulatory efforts could prove ephemeral, reversed by the next Democratic administration that could put all the job-crushing Obama regulations back in place — and worse," wrote more than two dozen groups, including the Competitive Enterprise Institute, Club for Growth and American Energy Alliance.