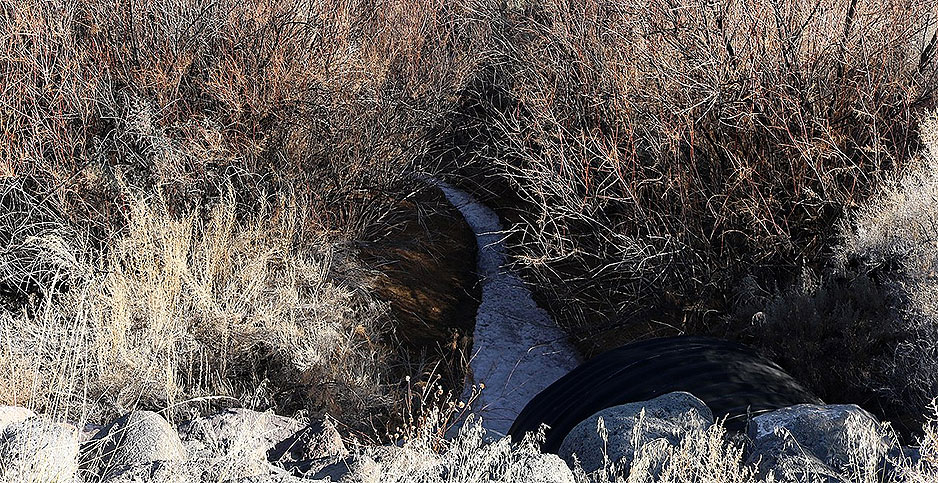 Negro Creek in Colorado is seen here frozen in winter. The U.S. Board on Geographic Names is considering a proposal to change its name to Clay Creek. Jeffrey Beall/Wikipedia

Colorado’s Negro Creek, once known by a more offensive name, would become Clay Creek under a proposal before the U.S. Board on Geographic Names. Oregon’s Negro Ben Mountain, which likewise once had an uglier moniker, would become Ben Johnson Mountain.

And despite some initial local outcry amplified by lawmakers, the Fish and Wildlife Service shows no sign of reversing a renaming of the Squaw Creek National Wildlife Refuge in Missouri to the Loess Bluffs NWR.

"This is a wonderful place and should not be referred to by a disrespectful name as it was before the renaming," wrote Sarah James, who describes herself as a member of the Iowa Tribe of Kansas and Nebraska.

James was among the 500-plus individuals to weigh in on the Squaw Creek refuge renaming last year during a public comment period ordered by Congress. Unlike James, the vast majority opposed the name change (Greenwire, Aug. 7, 2019).

"I believe the replacement name for Squaw Creek … was pushed through without necessary discussion from area residents and leaders," wrote Karen Reardon, a resident of St. Joseph, Mo. "It seems to have been a political ploy without common sense."

Now, as protests have swept the nation over the deaths of African Americans at the hands of police, and many communities are confronting racist legacies attached to the names of schools and military bases, waterways and mountaintops, the geographic names and Loess Bluffs cases offer several instructive lessons.

First is that process lends legitimacy, like the routine steps followed by the Board on Geographic Names. Another, as Reardon noted, is that community engagement is crucial. Not least, the Loess Bluffs controversy shows that even fervent resistance to a name change can dissipate over time.

The St. Joseph News-Press reported that the controversy over changing the refuge’s name has "died down," a view echoed by one anonymous commenter, who told FWS "it seems ridiculous to go through all the extra expense of changing it back now that everyone has adjusted to the new name."

Known for decades as the Squaw Creek National Wildlife Refuge, it was renamed in January 2017 in response to concerns about the word "squaw" raised by Native American tribal leaders and others.

"The Obama administration announced its intention to target wildlife refuges with names they considered ‘offensive,’" Rep. Sam Graves (R-Mo.) wrote to the Interior Department at the time, criticizing what he called a "push for political correctness."

A conference report accompanying a fiscal 2019 omnibus spending package noted "with concern the Service’s unilateral decision to change the name … without first consulting local stakeholders via an open process" and directed a public comment period that expired without further action last August.

In fiscal 2019, the multiagency Board on Geographic Names considered 165 domestic proposals, of which 138 new names and changes were approved and 27 were disapproved.

The board, for instance, approved a proposal submitted by the Georgia Senate to change the name of Runaway Negro Creek in Chatham County to Freedom Creek.

Colorado’s Negro Creek, located on federal land in the western part of the state, is now up for at least its second redesignation by the board.

"Army Map Service maps published prior to 1976 showed the pejorative form, which dates to at least 1885," the board noted in April, adding that "this name was used locally and published on U.S. Forest Service maps."

With a nod to the state’s beer brewing industry, an earlier proposal would have dubbed the stream Hops Creek, but Clay Creek was later selected following a naming contest conducted in the local high school.

While racial terms continue to be a common source of naming concern, they are not the only one (Greenwire, Sept. 12, 2017).

A proposal currently under review would rename Fag Lake, in Minnesota’s Superior National Forest, as Standing in the Northern Lights Lake, with the petitioner noting the lake "has a homophobic slur as its name which causes great harm."

And in April, the board approved changing an 11-acre Alaskan feature from Seduction Point to Ayiklutu, following an inquiry into the 18th century origins of the offending name.

"A Kaagwaantaan woman was raped at this spot by British sailors [and] the name is meant to imply that she seduced the sailors," the petitioner recounted, adding that "the name is offensive since it acknowledges a very ugly crime that happened there by explorers along with many other similar crimes of that time."