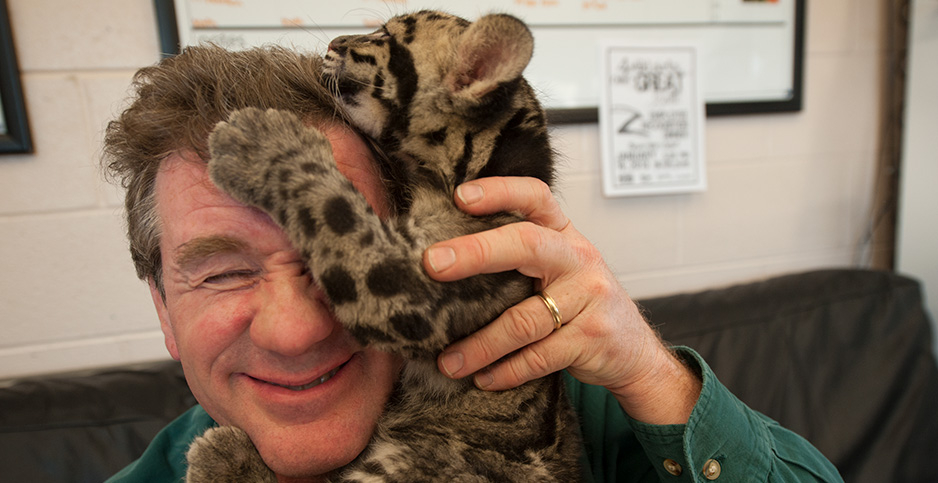 Joel Sartore gets up close with a clouded leopard cub, one of the many animals he has photographed during his long tenure with National Geographic. Courtesy of Columbus Zoo And Aquarium/National Geographic Creative

It’s all in a day’s work for the longtime National Geographic photographer, who’s on an epic quest to document thousands of species facing extinction before it’s too late.

He’s made some good progress, but there’s much more work to be done.

"We’ve been at it for nearly 14 years, and we’ve photographed nearly 10,000 species so far," Sartore said in a recent interview. "I figure we’ll be at this another 10 to 15 years before we get all of them."

The most recent installment in the Photo Ark series is a book called "Vanishing: The World’s Most Vulnerable Animals," from whose cover an endangered Florida panther makes haunting eye contact with the reader.

"I don’t understand why people aren’t screaming about this," Sartore said.

When I was growing up in Ponca City, Okla., my parents both really cared about nature. My mother was interested in our suburban backyard birds and flowers, and my father was interested in hunting and fishing. My dad would also go out and look for mushrooms in the spring. He used to say whether he found anything or not didn’t matter. It just mattered that we got outside. And I firmly believe because my parents cared about nature, so do I. The apple doesn’t fall far from the tree.

The Photo Ark is really an attempt to get people to see these animals and fall in love with them and be inspired to save the planet. It’s just a series of charismatic portraits done very simply using black and white backgrounds, so there’s no distractions and no size comparison. You know, the mouse is every bit as big and important as the elephant on these things. And we also get a lot of eye contact that way. With no distractions, we can look them in the eye and see there’s great beauty and intelligence there, and these animals have a basic right to exist.

The other thing that’s really on my mind is that as these other species head to extinction, so could we. We need to have pollinating insects to bring us fruits and vegetables, and we need to have intact rainforests around the equator to stabilize our rainfall patterns so we can grow crops. These are things that really are big deals to human survival in the long term, but we sure aren’t paying attention to them. So perhaps this set of studio portraits can make the extinction crisis a little less impactful upon ourselves.

Yes. I don’t understand why people aren’t screaming about this. I can hear people screaming at the football stadium about 4 miles from my house on any given Saturday. And every time, I think, "Wow, if everyone had that much spirit and passion and enthusiasm for something that actually mattered, like the future of life on Earth, could we slow or lessen considerably the impact of the extinction crisis? You bet we could. We’d have a big running start."

People have to learn that saving the environment is tremendously satisfying. It puts a smile on everybody’s face. It beautifies our world. It cleans our world, purifies our air and our water, keeps the world diverse, keeps our lifestyles as they are. Food doesn’t come from the grocery store. It comes from the environment; it comes from outside. So this is a generational shift, and that takes time.

No, I wouldn’t say it’s depressing. A lot of species in the world don’t have a lot of time. But when I think about that, I get pissed off. I get fired up. I get motivated to do more.

What was the inspiration for the book "Vanishing: The World’s Most Vulnerable Animals"?

The book is really meant to feature the animals that need the most help. They’re very close to extinction or headed that way, and they need a lot of extra attention to save them. These are animals like the northern white rhino, the South China tiger and a lot of lemur species.

Yes. Climate change and habitat loss, where we’re bulldozing the woods and fishing out the oceans, are the main drivers. And a lot of the amphibians you see in that book have been really drastically affected by climate change because they need to have cool, damp places high up in the mountains to reproduce, and they’re losing that.

Absolutely, yeah. The goal of the Photo Ark isn’t to become the world’s largest obituary of what we throw away, what we squander. The goal of Photo Ark is really to get people to care about not only the state of the planet, but also what they can do right from home. And there’s a million things people can do. They can eat less meat, to start. They can insulate their home. And they can water their lawn less. Your lawn will green up when it rains, I promise.

What is your favorite place you’ve traveled to for work?

My favorite place, by far, was Antarctica. I went there as a photo coach on a Geographic Expedition ship. It was just astounding and amazing in every way. I got to coach the ship guests on taking photos of penguins and fur seals. And the animals aren’t scared of people, ’cause people never go down there to harass them.

What is your favorite species you’ve ever photographed?

In terms of picking a favorite place or a favorite species, I always say it’s the next one. So this week I’m going to go to Columbia, S.C., to work at the Riverbanks Zoo and the Carolina wildlife rehab center. I’m going to photograph a few birds, but mostly corals. It’s hard to get the public to care about something that looks like a pretty rock. It’s very difficult. But that’s my job, right? It’s my job to get people to care about the sparrows, the minnows, the toads of the world. It’s a big honor, and I do my best.