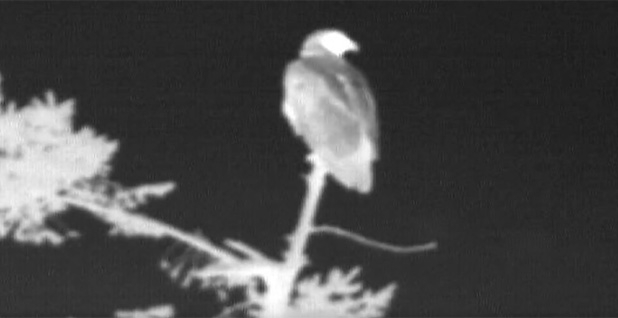 The prospect of turbines killing birds is one of the chief attacks made on the wind industry by President Trump and other critics.

Now, researchers at the Pacific Northwest National Laboratory say they may have a solution to the problem, with help from technology typically used in night-vision goggles.

The lab developed software that analyzes images from special thermal cameras to automatically identify birds and bats and track their flight patterns around the clock, including in bad weather. The goal is to determine if a given area is a bird hot spot, and avoid siting offshore turbines in those places or adjust operations at existing wind farms.

"To the best of my knowledge, there is no commercial system out there now to automatically detect birds and bats and record their flight tracks," said Shari Matzner, a PNNL engineer leading development of the technology. "This technology is needed to support long-term monitoring around wind turbines, especially offshore."

Currently, environmental assessments can be unreliable, requiring humans to estimate possible bird collisions by observing animals with the naked eye for a short period of time while standing in a field or sitting in a boat. Offshore, observations typically can only occur in daylight or good weather, making it more likely that assessments will miss bird risks entirely.

The software, known as ThermalTracker, allows continuous monitoring in remote places where it’s currently impossible, said Wing Goodale, deputy director of the Biodiversity Research Institute, which is currently testing the technology in Maine.

"This is an extraordinary collaboration between technology developers, engineers and wildlife biologists who are working together on cutting-edge technology," he said.

Matzner said she is looking at the possibility of using the system on floating platforms, or at the base of turbines.

Unlike current assessment methods, the technology can collect data "in all weather conditions and at night, when human surveyors cannot make observations," said Matzner. It also can allow researchers to categorize birds by broad families, such as gulls versus terns.

The use of two cameras creates a 3-D effect that can determine whether detected birds are flying at heights where they could collide with turbines, according to PNNL.

There is only one operating U.S. offshore wind farm, but the siting issue is expected to arise more frequently with additional proposed offshore sites.

Trump stirred up the issue last year, saying to former Republican candidate Herman Cain on a radio show that wind "kills all the birds. I don’t know if you know that. … Thousands of birds are lying on the ground. And the eagle. You know, certain parts of California — they’ve killed so many eagles."

The American Bird Conservancy estimates that "hundreds of thousands of birds and bats" are killed by turbines annually. It and several other groups sent a letter to the Trump administration in April saying that the awarding of offshore wind leases by the Interior Department is premature unless a full environmental risk assessment is done (E&E News PM, April 17).

Wind supporters say the concerns are exaggerated, noting various studies (Climatewire, Oct. 27, 2016). The American Wind Energy Association says wind power is far less harmful to wildlife than traditional energy sources and is one of the only energy sources without population-level impacts like climate-change-driven habitat loss.

Scientists have used thermal imaging in the past to observe bats but were not able to get much detail other than rough shapes. ThermalTracker aims to improve that by harnessing algorithms that determine the frequency of wing flaps and analyze the shape of animal flight paths in thermal camera images. The dual data allow researchers to categorize birds by broad families.

Published papers found early versions of ThermalTracker detected 81 percent of all animals and accurately classified more than 80 percent of those.

The lab is working to allow the system to process video in real time, so it only records video when a bird or bat is detected. That allows equipment to be used for longer periods of time, since it doesn’t have to save as much data.

Yet Michael Hutchins, director of the bird smart wind energy campaign at American Bird Conservancy, said he was skeptical. He noted the technology cannot analyze birds down to the species level.

"That’s really pretty critical. You have to know whether you have a regular tern or a roseate tern, which is an endangered species," he said.

Matzner said the technology might be able to do that within a year or two, at least to identify with high probability a species of interest.

"The identification of the animals to some taxonomic level is a work in progress," she said.