National lab is cheerleader and umpire for reactors’ future 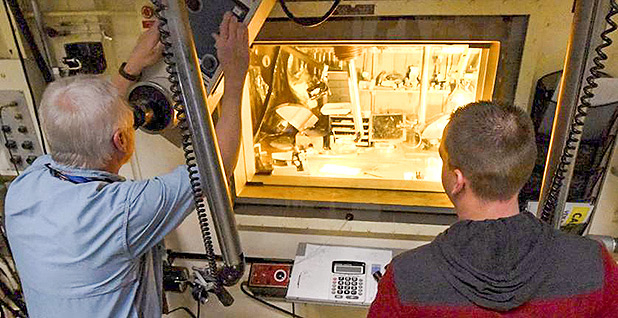 SCOVILLE, Idaho — Nuclear power for the grid was born here in 1951, when an experimental reactor’s football-sized core sent current flowing to a quartet of lightbulbs at the isolated government laboratory on Idaho’s southeast desert.

And the nuclear industry’s future may be written here, as well — at least key parts of it — inside the Energy Department’s Idaho National Laboratory testing complex.

INL’s scientists, with colleagues at other DOE labs, are keeping a close watch on the health of the nation’s commercial nuclear reactors, most of them built before the mid-1980s in the flush of excitement about nuclear energy that would be "too cheap to meter," as an early promoter predicted. How long can the plants keep going before critical steel, concrete and wiring systems are overcome by the aging effects of heat, radiation and mechanical stresses?

And now, with the nuclear industry struggling to compete against low-cost natural gas generation, INL is also stepping up a search for ways to lower reactor operating costs, from research on "accident tolerant" reactor fuels to designing more efficient control rooms and using technology to reduce reactor safety inspection time and costs.

"Our concern here is that these 99 reactors that we have are national assets that we need to preserve as long as we can do so safely and economically," said John C. Wagner, director of INL’s Light Water Reactor Sustainability Program.

"We’re going to add a significant [research] emphasis on things that will help the economics and the modernization of the current fleet."

Wagner said INL’s work affirms conclusions by the Nuclear Regulatory Commission (NRC) and the Electric Power Research Institute that there are no "show stopper" aging issues currently in sight that could threaten to force premature shutdowns of current reactors for safety reasons.

"We don’t see any reason why all, or the majority, can’t run for 80 years and possibly beyond. We have confidence in the safety of these systems" because of a wide-ranging program of research, monitoring and engineering remedies to aging issues, he said.

The NRC has licensed 84 reactors to continue operating beyond the initial 40-year span for an additional 20 years. Nine more relicensing applications are pending, and four reactors are expected to apply, the NRC said.

But if the plants cannot go beyond 60 years, or if some unexpected vulnerability undermines the most costly components — reactor vessels or concrete containment structures — it could be traumatic for the U.S. power supply. It could also be potentially crippling for clean energy goals, if cuts in power plant carbon emissions become national policy again. Nuclear plants provide nearly 63 percent of carbon-free generation in the U.S.

The Energy Department’s 2016 report on the reactor longevity campaign notes the potential for damaging surprises. The specialized stainless steel alloys chosen for reactors in the 1960s had many plus factors, DOE said, but concerns, as well. Reactor radiation can add to stress-related corrosion cracking, threatening structural integrity. DOE researchers noted this year that "limited information is known about the long-term performance" of these alloys. Concrete structures have borne thermal shock and radiation, and reactor wiring has lived in harsh environments. Aging issues are "expected to become more severe" as time passes, DOE said.

An essential test process at Idaho and other DOE labs is to bombard sample reactor materials with enormous radiation levels inside test reactors, accelerating stress testing to mimic impacts of operations far beyond 40 years.

"It’s possible plants could run into aging problems that were too expensive to fix, and the operators would decide to shut it down," Wagner said.

"Nearly all of the fleet will go offline between 2029 and 2055" if plants cannot operate beyond 60 years, Wagner said. "That may seem like a long time away, but it’s really not when you consider replacing that level of assets."

INL’s investigations of reactor aging and predictions of longevity have meant new life for old research facilities at the site, a working museum of U.S. nuclear energy development. More than 52 research reactors have operated here at various times for the commercial industry and the nuclear Navy on the immense, 890-square-mile INL tract, evidence of the synergy between military and civilian nuclear programs.

Three reactors are still operational, their research programs overseen by the Battelle Energy Alliance LLC. Most of the rest have been decommissioned, creating another top-priority mission — the cleanup of the Idaho site, contaminated with wastes from nuclear programs and conventional weapons testing. The Idaho Cleanup Project must safeguard the Snake River Plain Aquifer lying beneath the laboratory’s footprint, which irrigates Idaho’s agricultural economy.

A similar trip to the top of a commercial reactor would be short and lethal for unprotected visitors, but not in TREAT’s case. Its nuclear fuel is encased in graphite, and its radiation absorbed by surrounding control rods that move faster than the eye can see to expose the fuel and reactor materials to radiation in experiments.

"It was mothballed in the early ’90s, when basically nuclear R&D [research and development] was put to zero," said nuclear fuels engineer Dan Wachs. The intense radiation can simulate the devastating Fukushima Daiichi or Chernobyl meltdowns.

"With the advent of these new advanced reactors and the desire of the light water reactor industry to push their fuels farther … some of the key questions become what is the developing safety criteria for regulating and operating these facilities. So DOE made the decision to reactivate the reactor," Wagner said.

"Post-Fukushima, there is a lot of interest in how to make the fuel more robust [in an accident] so there is more time to deal with the situation.

"If I can make my plant more accident-tolerant — and fuel may be just one component of that — so that I have much more time to mitigate a situation, it changes the safety significance of systems that you are relying on. For example, maybe I don’t need my [emergency backup] diesel generator to start up fast. Maybe I don’t need my diesel generators at all," Wagner said.

Another legacy structure is INL’s Hot Fuel Examination Facility, a sealed laboratory where highly radioactive materials are inspected and analyzed in two closed chambers. "Since 1975, no one has set foot in it," said INL’s Joseph Campbell. Instead, used fuel assemblies and reactor test samples are inserted through airlock chambers into work spaces. Workers like Cassie Thueson peer through 4-foot-thick glass windows, conducting tests from the outside by manipulating handles connected to robot arms inside.

Not far from the Cold War-vintage TREAT facility is the new Irradiated Materials Characterization Laboratory with a transmission electron microscope, where research scientist Brandon Miller calls up the image of individual tungsten atoms in a sample of irradiated metal. The $4 million device can take a bird’s-eye view of a football stadium together with all its parking lots, and zoom in to see a blade of grass, Miller explained. It could spot whether components of reactor alloys are being forced apart by radiation, he said.

Elsewhere at INL, the development of small modular reactors (SMRs) as a potential successor to current plants will get a high-stakes test, with construction of the first NuScale unit scheduled to begin in 2021. New reactor fuels and claddings for SMRs are also being investigated with heavy doses of radiation.

"I think we have to learn how to get the cost down for nuclear plants," said INL nuclear engineer Hans Gougar. "It takes a combination of getting construction and engineers costs down, how we do labor control, how we do change control, all of which has nothing to do with splitting the atom."

Wagner said that the lab, as the Energy Department’s leader on nuclear power research, must make good on both of its missions — helping keep nuclear power a viable energy option for the United States for decades to come, if possible, and maintaining credibility as a neutral expert witness on critical questions of aging threats to reactor safety.

INL develops models that describe degradation of key components, while gathering data on aging to show how predictions line up with reality, he said. "The utilities will take that data or data of their own and use it in their [license renewal] applications, and the NRC will take the data, as well," Wagner added. "We do the research. The research speaks for itself. The licensees apply the data," and the NRC will decide, he said.