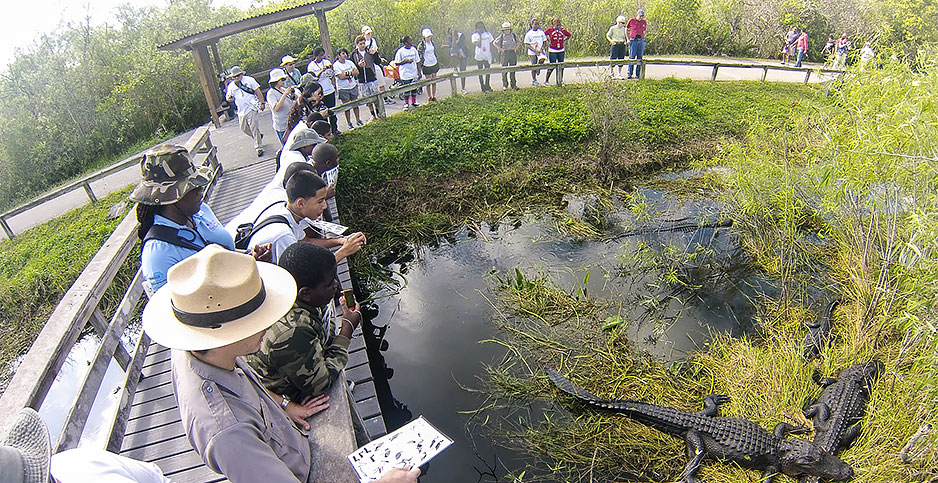 Visitors to Everglades National Park in Florida. The park, which had been closed due to the cornavirus pandemic, is planning to partially reopen next week. J. Roark/NPS

Everglades National Park in Florida will begin reopening Monday, making it one of the first national parks in the nation to heed President Trump’s call to get back in business after closing due to the coronavirus pandemic.

"I am pleased that we can be part of our community’s efforts to take incremental steps towards reopening," said Everglades Superintendent Pedro Ramos.

The superintendent of Great Smoky Mountains National Park in Tennessee said yesterday that his park will start a partial reopening May 9.

"We recognize this closure has been extremely difficult for our local residents, as well as park visitors from across the country, who seek the park as a special place for healing, exercise, recreation and inspiration," said Superintendent Cassius Cash.

The pandemic shut down more than 150 of the 419 NPS sites. Under a new plan, parks will reopen on a rolling basis, similar to the way they began shutting down in mid-March.

"Following guidance from the White House, Centers for Disease Control and Prevention, and state and local public health authorities, we are increasing access and services in a phased approach across all units of the National Park System," the park service said in a statement on its website.

Interior Secretary David Bernhardt signaled the new plan in a tweet Saturday, saying that he had been "directed" by Trump to reopen all the national parks and that it would happen "as rapidly as possible" (Greenwire, April 27).

But with many of the largest and most popular parks still closed, including Yellowstone, Yosemite and Shenandoah, the park service urged visitors to make sure an individual park is open before heading out.

At Yellowstone, Xanterra, the concessionaire that runs most of the campgrounds and hotels, said it hopes to begin its operations June 15. The plan calls for opening campgrounds and some cabins at first but holding off on the hotels until later in the summer.

While Yellowstone has yet to announce a firm date for the park’s reopening, park Superintendent Cam Sholly said "it’s probably sooner than later" (Greenwire, April 28).

Under Sholly’s tentative plan, a "phase 1" reopening would include roads, trails, clinics, gas stations and some food service, while "phase 2" would include limited cabin accommodations, takeout food service, and access to campgrounds and the backcountry.

When Everglades reopens Monday, the park will allow access to its main road, from the Homestead entrance to Flamingo, along with some restrooms, boat ramps, gas pumps, a store and a fish cleaning station. All the park’s visitor centers and public buildings will remain closed.

"Our action to restore access to the park’s main road and Flamingo provides additional opportunities for people to spread out a little more while practicing social distancing," Ramos said.

The reopening at Great Smoky Mountains, which draws an average of 1 million visitors per month from May through October, will include many roads and trails. Campgrounds, picnic pavilions, visitor centers and many secondary roads will remain closed for at least two weeks.

Cash said the site will "balance our responsibility to protect park resources and the health and safety of everyone."

Toward that end, park officials said they planned to use disinfectant fogging to clean restrooms and public buildings and to install plexiglass shields at visitor centers. The park also said it intends to "examine each facility function and service" to make sure the park is following all guidance from health officials.

Staff at smaller park sites are getting ready to reopen too.

Bryce Canyon National Park in Utah said it will partially reopen Wednesday, making the main road and all viewpoints to Rainbow Point accessible, along with some restrooms and trails.

And officials at Curecanti National Recreation Area and Black Canyon of the Gunnison National Park in Colorado said they plan to open boating at Blue Mesa and other reservoir areas, along with some parts of Black Canyon, within the next two weeks.