Nations at odds over funding as COP winds down 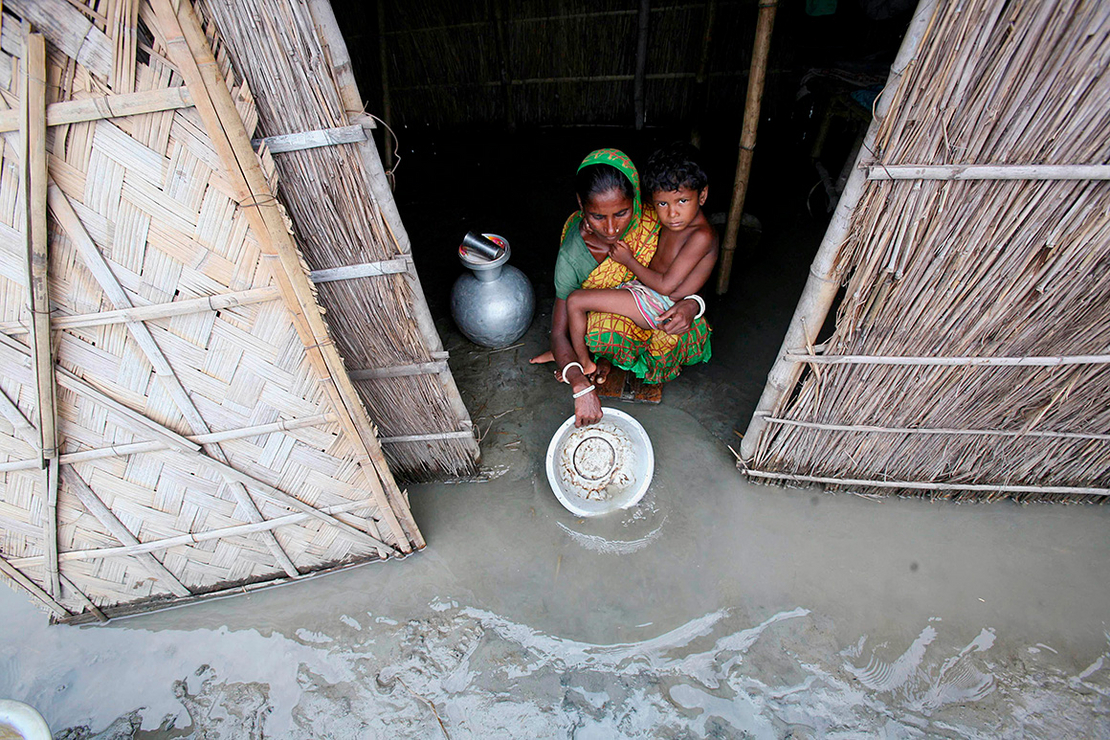 A woman and her daughter during flooding in northern Bangladesh in 2008. Divisions are growing at the U.N. climate talks over the severe losses that developing countries face from climate change. AP Photo/Pavel Rahman

GLASGOW, Scotland — The dividing lines between nearly 200 countries became clearer this morning as representatives gathered to strike a climate deal that will pave their way forward over the next decade.

Many said a new draft text had made some progress but left large holes or weaknesses that needed addressing before they could sign on.

Representatives of developing countries were most concerned that their needs were not being heard on "loss and damage" — a euphemism for compensation to countries that have suffered irreparable harm from global warming.

It’s an area where talks had slipped back, said Tina Stege, who represents the Marshall Islands and a collection of countries, including the United States, called the High Ambition Coalition.

Speaking on behalf of a coalition of more than 130 developing countries known as the Group of 77 and China, Ahmadou Sebory Touré, the lead negotiator for Guinea, said the group was “deeply disappointed” that its proposal to establish a funding mechanism for loss and damage had not been reflected in draft text released this morning.

“That proposal has been put forward by the entire developing world — representing six of every seven people on Earth — to enable the multilateral climate regime to effectively respond to our needs,” he said.

After more than a week of tense negotiations and all-night scrabbles at this year’s United Nations climate conference, or COP 26, over how needs and priorities are translated into words that will guide the world forward, heads of delegations were starting to reveal the emerging cracks.

“This is personal, this is not about politics. And I don’t live in Palau, I don’t live on Barbados, I don’t live on the Marshall Islands, but there it’s even more personal because there you’re standing with your feet in the water,” said Frans Timmermans, vice president of the European Commission.

“This is what we need to address today: We need to make sure major emitters reduce their emissions so that we keep 1.5 alive,” he added, earning applause from the room of delegates.

The European Union has one of the most ambitious emissions-cutting targets among the Group of 20 major economies and is working to pass legislation that would help it achieve them. But it has struggled to bring together the money developed countries promised to developing nations to help them battle the impacts of climate change.

Other countries raised concerns that language around the phasing out of fossil fuels had been weakened.

That fossil fuels have been mentioned in the text is notable since climate change negotiations have tended to refer to warming and emissions rather than the source of that pollution — most of which comes from coal, oil and gas.

But the addition of “inefficient” fossil fuels and “unabated” coal stirred concerns that major fossil fuel producers were seeking to water down the final text.

U.S. climate envoy John Kerry said “that language must stay” and fossil fuel subsidies must go — pointing out that $2.5 billion over the past five years had gone toward fossil fuels.

The United States has been less clear on providing finance to the developing world, and Kerry said the country could and would go along with doubling finance for adaptation “in the spirit of compromise.”

But the U.S. also had important edits it wanted to make to the text on where the finance could come from for adaptation and loss and damage.

After hours in which countries shared their concerns and pushed for pivots, delegates adjourned to continue their negotiations.

Alok Sharma, president of the climate conference, had said as talks began that he wanted everything wrapped up by 6 p.m. today. But as the clock ticked toward that hour, it remained clear that the summit is far from over.

“Let us drive progress and forge consensus,” Sharma said today. “As so many of you have said, ‘The eyes of the world are on us.’”