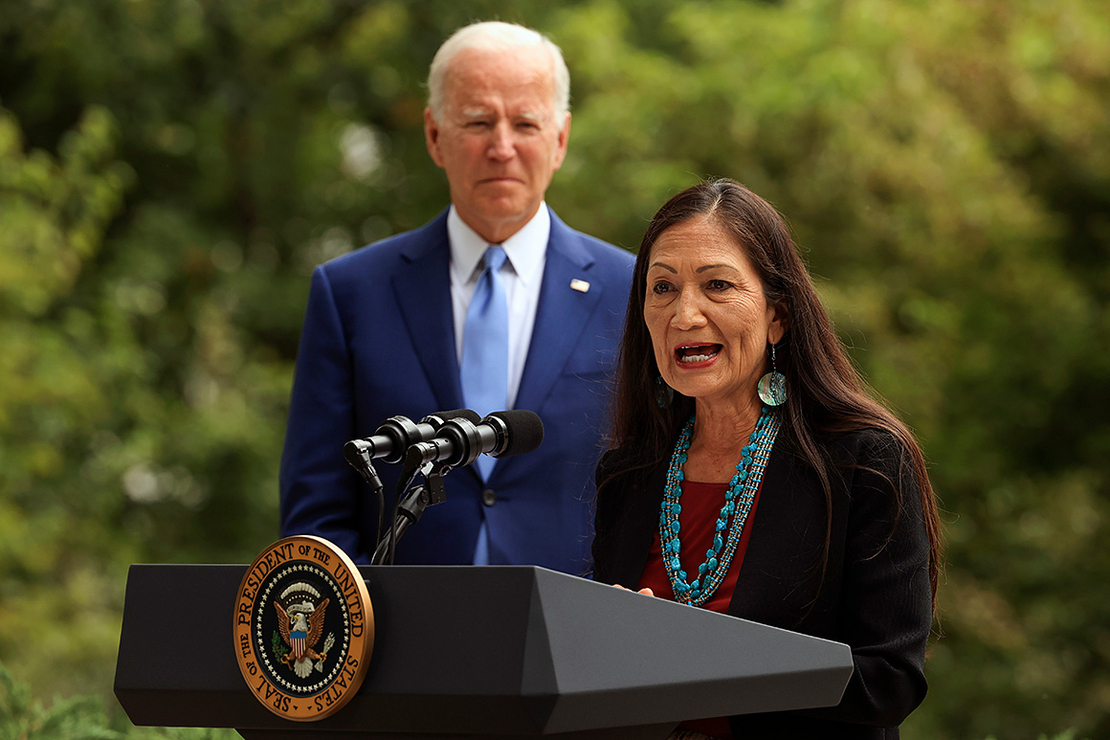 Interior Secretary Deb Haaland is recruiting a notable number of Native American political appointees, a trend advocates hope will lead to greater consideration of Indigenous perspectives within a department that touches tribal lives in myriad ways.

In the most recent moves, Interior last week announced a citizen of the Cherokee Nation, Joel West Williams, as deputy solicitor for Indian Affairs, and a member of the Oneida Nation of Wisconsin, Tracy Canard Goodluck, as a senior adviser to the assistant secretary for Indian affairs.

Haaland, a member of New Mexico’s Laguna Pueblo, is the first Native American to head the Cabinet-level department.

“We’ve never seen so much Native leadership,” Kevin Washburn, a former Interior assistant secretary for Indian Affairs, told E&E News, adding that “we have seen less pigeonholing of Natives into the obvious positions, such as in Indian Affairs.”

Williams, for instance, is joining an office led by Solicitor Robert Anderson, an enrolled member of the Bois Forte Band of the Minnesota Chippewa Tribe. A key player in some of Interior’s decisionmaking, Anderson in particular has a top staff with significant Native American representation (Greenwire, July 23, 2021).

His principal deputy, Ann Marie Bledsoe Downes, is an enrolled member of the Winnebago Tribe of Nebraska.

“Appointing American Indians and Alaska Natives to the Department of the Interior and across all federal agencies is incredibly significant and important for Indian Country. [They] bring a unique perspective and understanding of Indian Country to their positions and have a direct impact on crafting policies and internal decision points that can make a substantial difference for Tribal Nations and tribal citizens across the United States,” Shannon Holsey, president of the Stockbridge-Munsee Band of Mohican Indians and treasurer of the National Congress of American Indians, told E&E News.

Sarah Krakoff, the deputy solicitor for parks and wildlife, is not Native American. But her first job as a lawyer was working with the Navajo Nation and she formerly directed the University of Colorado Law’s American Indian Law Clinic.

“All of this makes a difference,” said Washburn, now dean of the University of Iowa College of Law. “Having Native Americans at the highest ranks of the Department also changes the whole conversation in the federal government around work with tribal nations.”

Washburn added that “it won’t make tribal nations prevail in every policy debate, but tribes can be more satisfied that their concerns have been heard and that bias and prejudice are not the basis for federal decisions.”

In some cases during Haaland’s tenure, Interior has rendered decisions that reverse prior administration actions and effectively extend a win to tribes.

The most high-profile decision was urging President Joe Biden to restore the boundaries of the Bears Ears and Grand-Staircase Escalante national monuments in Utah, which had been cut by President Donald Trump. Biden did that last October, securing a victory for Western tribes that have described the lands as sacred.

There have been others.

Last February, for instance, the Interior solicitor’s office ruled in favor of tribes and against the state of North Dakota, in the latest legal turn over ownership of riverbed mineral rights on the Fort Berthold Indian Reservation.

Reversing a Trump administration opinion, Anderson concluded that the minerals beneath the riverbed of the Missouri River where it flows through the reservation belong to the Three Affiliated Tribes of the Fort Berthold Reservation (Greenwire, Feb. 4).

The tribes refer to themselves as the Mandan, Hidatsa and Arikara Nation.

“Today’s action, based on extensive historical and legal review, underscores the Department’s commitment to upholding its trust and treaty obligations in accordance with the law,” Anderson said in a statement at the time.

The previous April, Anderson effectively restored the Interior Department’s ability to take land into trust for tribes in Alaska by withdrawing a legal opinion issued during the Trump administration.

And earlier this month, Haaland rescinded a memorandum issued in 1975 by then-Interior Secretary Rogers Morton that critics said had erected an obstacle to Interior’s review and approval of tribal water codes.

“If we are to truly support Tribal self-determination, we cannot be afraid to review and correct actions of the past that were designed to create obstacles for Tribal nations,” Haaland said.

In other cases, tribal interests may conflict, leading to dissatisfaction with whatever Interior does.

Navajo residents who lease property to oil and gas companies, for instance, have challenged efforts to stop fracking near Chaco Canyon in New Mexico. The Biden administration has proposed to halt oil and gas leases for 20 years on federal lands inside a 10-mile radius around the canyon.

Haaland advocated for expanding protections against drilling near Chaco while in Congress, as have Pueblo leaders and environmental groups.

“By simply bypassing true and inclusive tribal consultation with the Navajo Nation and [individuals] the Biden-Harris Administration is markedly undermining its trust responsibility they owe to the Navajo Nation,” Nez and Lizer wrote.

In general, the federal government doesn’t employ a large share of Native Americans. In 2006, according to the Office of Personnel Management, 2.1 percent of the total federal workforce were classified as American Indian or Alaska Native. By 2017, that had fallen to 1.7 percent.

With its Bureau of Indian Affairs and related responsibilities, Interior ranks significantly higher. As of a 2020 report, some 12 percent of the department’s 66,000 employees were classified as American Indian or Alaska Native.

Following its first 100 days in office last year, the Biden administration announced that of approximately 1,500 agency appointees governmentwide 2 percent identified as American Indian or Alaska Native. It is difficult, however, to compare the hiring rates of political appointees across different agencies.

At Interior, the Biden administration has tapped tribal members for a variety of significant political jobs. Haaland’s second chief of staff, Lawrence Roberts, is a citizen of the Oneida Nation of Wisconsin and was the first Native American to hold the chief of staff position. He departed for a tribal position last November.

Chuck Sams, an enrolled member of the Confederated Tribes of the Umatilla Indian Reservation, is now the first Native American head of the National Park Service.

“I am Cayuse and Walla Walla with blood ties to the Yankton Sioux and Cocopah Peoples. On my American Indian side of the family, we have lived here since time immemorial or for at least 15,000 years,” Sams informed senators at his confirmation hearing.