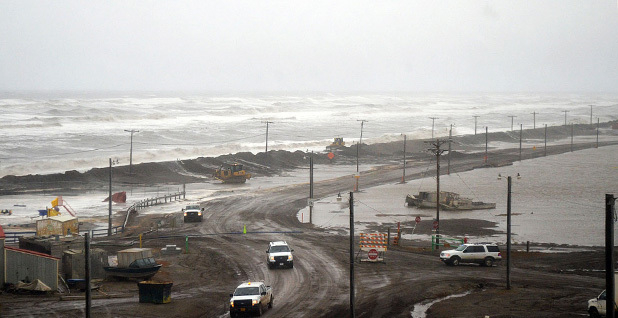 Early winter storms aren’t unheard of on Alaska’s North Slope. But scientists say that as the Earth’s climate continues to warm, Native communities on the Arctic Ocean and Bering Strait will experience more frequent devastating storms that could erode their shorelines and force the most vulnerable villages to move to higher ground.

They disagree with the environmental protesters who are holding anti-drilling rallies in Anchorage today as Obama arrives to speak at the State Department’s climate change conference.

The activists want Obama to stop Royal Dutch Shell PLC’s drilling operation in the Chukchi Sea, warning that an oil spill in Arctic waters would be catastrophic to Native communities that rely on Arctic marine mammals for their culture and subsistence.

"We’re concerned that the environmentalists are trying to save the world at the expense of the Inupiat people of the Arctic Slope," observed Crawford Patkotak, chairman of the board for the Arctic Slope Regional Corp. (ASRC). "That’s our real concern."

Most North Slope officials support expanded oil and gas development in the Arctic offshore region and in northern Alaska’s federal lands. They insist it’s possible to have both a clean environment and careful resource development.

"We firmly believe that the oil and gas and our animals can live in harmony by ensuring that the oil and gas development is done in a manner that won’t affect the well-being of our subsistence resources," said Jacob Adams Sr., chief administrative officer for the North Slope Borough.

‘We’re not shills for industry’

"We’ve got tourism, but we can’t build a community around tourism," said Richard Glenn, executive vice president for lands and natural resources for ASRC. "Other than oil and gas, there’s really nothing else here. There’s no agriculture, no timber, no commercial fishing."

The Native leaders maintain that they’re keeping a close watch on Shell as the company began drilling into the oil zone in the Chukchi. "We’ve looked at every step of the exploration, production and transportation possibilities," Glenn said.

"We’re not shills for industry," Glenn added. "We don’t have an unrealistic picture of the risk or the reward of development. We’ve watched and been a part of development for 45 years already. So we know where the buckets of risk and opportunity are in any successful, environmentally responsible and culturally responsible oil development."

While acknowledging the risks of offshore Arctic oil development, the Native leaders have also found a more direct way to benefit from Shell’s operations.

In July 2014, ASRC and six North Slope village corporations formed a separate company, Arctic Inupiat Offshore LLC, and entered into a binding agreement allowing it to acquire an interest in Shell’s Chukchi operations.

As a result, if production begins in the outer continental shelf, the people who live in the North Slope region will be part-owners of Shell’s production stream.

Glenn says the Inupiat people’s support for the oil industry is a product of their history.

For centuries, the Native communities in Alaska’s remote northern region lived subsistence lifestyles, hunting and fishing on lands they claimed under the common law doctrine of aboriginal title. However, the U.S. government never recognized those Native ownership claims.

The federal government didn’t tackle the long-festering question of who owned Alaska’s North Slope until a mother lode of oil was discovered on the North Slope in the late 1960s.

In 1971, the federal government enacted the Alaska Native Claims Settlement Act, which carved Alaska into 12 regional corporations. Each corporation was allowed to choose a small slice of unclaimed property in its region and was given a portion of the government’s $1 billion cash settlement to give up its aboriginal title to the lands.

Most importantly, the borough receives money for every barrel of oil that’s transported across its lands through the TAPS.

"We’re facing a loss of oil production due to the decline of the big oil fields, a lack of new major discoveries and regulatory uncertainties," Glenn said. "And the people who are in charge of keeping the lights on in each of our communities say, ‘How are we going to keep TAPS full?’"

"They say, don’t you agree that there has to be life after oil at some point? And we say, yes, we’ll be right there with the rest of the world when we have to address the question of life after oil.

"We’re not going to shut the lights off in our communities for someone in New Jersey to have peace of mind," she said.