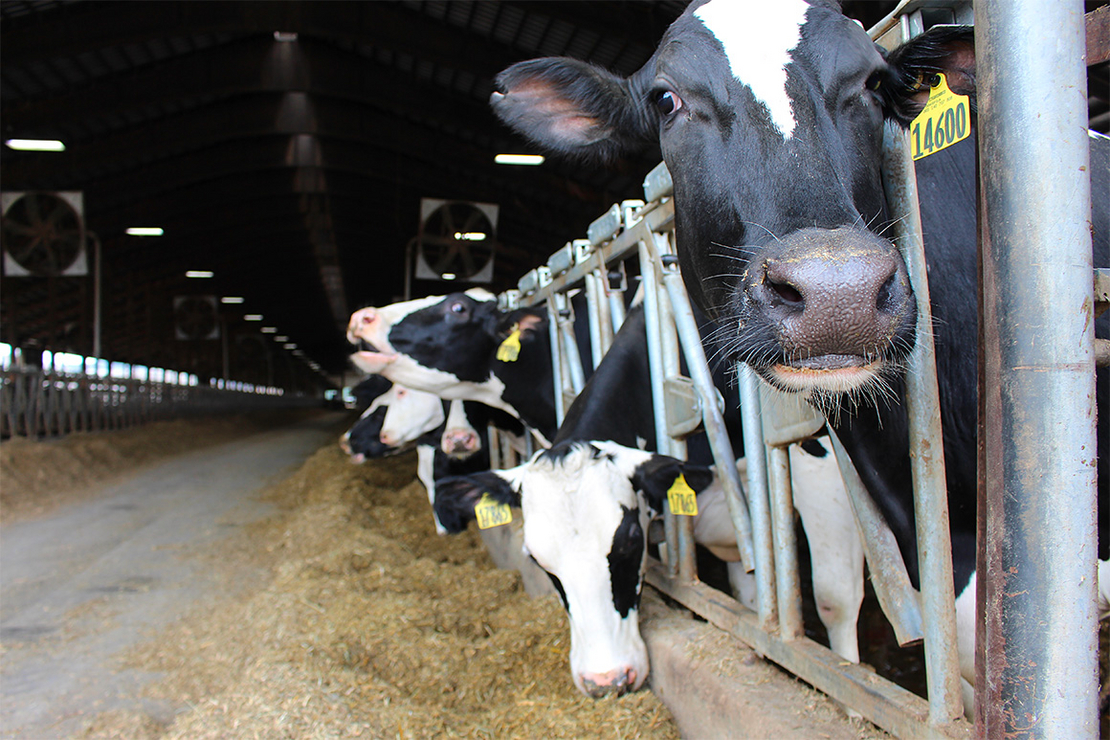 This story is the second in a three-part series. Read the first and third installments.

AURORA, N.Y. — At a few pennies per kilowatt-hour, farmers don’t make much from the electricity they generate from cow manure. So producers like Jason Burroughs are turning to markets clear across the country to sell a more promising type of power: renewable natural gas.

“I think farms have a big opportunity to be part of the solution, basically from a lot of what we do every day,” said Burroughs, who installed a $2.5 million anaerobic manure digester on his farm in New York’s Finger Lakes region about 20 years ago, thinking he’d have a side hustle as an electricity generator.

California’s low-carbon fuel standard is driving changes in the way farmers like Burroughs turn manure into energy. After years struggling to make enough money from electricity sales to maintain aging generators, Burroughs and other farmers are switching to RNG, which generates credits for California’s low-carbon fuel standard program and could give new purpose to manure digester systems that might otherwise go idle.

“The RNG route is a lot simpler route for this farm, and there’s a payback,” Burroughs told E&E News.

The setups trap methane from manure waste that can be sold as renewable fuel, reducing odors and cutting greenhouse gas emissions. The manure provides a valuable fertilizer, and dry material left over after the process makes a low-cost bedding for cows.

Unlike electricity generated from methane, renewable natural gas doesn’t have to be sold to a utility company and put on the power grid, where returns are meager in most of the United States. Instead, it’s fed into pipelines and sold to municipalities or transit agencies for vehicles or to industrial users, generating credits under state clean air standards in California and, perhaps soon, New York and other states.

Thanks to a nationwide national gas network, farmers just about anywhere can sell RNG to companies like Gevo Inc., a Colorado company with several ventures, including supplying Iowa farms’ product to BP PLC for use in the California market. A similar arrangement is in place between Smithfield Foods Inc. and Virginia-based Dominion Energy Inc. to make RNG from hog waste. In northern New York near the Canadian border, Suburban Propane Partners LP recently announced it would help build a new biodigester system at the farm of Jon Rulfs, replacing an electric generating system that he was ready to shut down.

Natural gas is a much better deal for farmers now. In some places, they make half as much from RNG as from their main commodity — milk, said Frank Mitloehner, a professor and air quality extension specialist at the University of California, Davis.

“That’s become a sizable chunk that many dairies are going after,” Mitloehner told E&E News. “It’s a very interesting model that’s taking off.”

Those projects may be just the beginning. A study for the American Gas Foundation in 2019 estimated that 30 percent to 60 percent of animal manure in the U.S. could be used to make RNG.

“I think people had to pivot,” said Sam Wade, director of public policy for the RNG Coalition, a collection of companies pressing for more renewable natural gas production from farms and for encouraging federal policies. “It’s an interesting shift.”

To supporters, RNG is the kind of solution to manure management and energy production that never fully materialized from making electricity. Thanks in large part to RNG production, California has already cut methane emissions from manure by about 25 percent, by some estimates.

But it’s not a perfect solution. Farmers have to spend hundreds of thousands of dollars on equipment that can clean the natural gas to pipeline standards. Crucially, farms in some states, especially in the Northeast, don’t have direct access to a natural gas pipeline and would have to truck the condensed version to an injection point along the line, which adds cost and sacrifices some of the carbon benefit.

The future also hinges on uncertain government incentives, which Wade said have been solid from EPA through the renewable fuel standard but are hotly contested in states like New York, where lawmakers are wrangling over details of a proposed low-carbon fuel standard that could allow farmers to be paid credits for energy generated from manure digesters. There’s no guarantee that those states will include manure-to-energy in the standards, however, in the face of opposition from environmental groups.

The Sierra Club and other organizations say manure digesters do more harm than good. In their view, manure-energy projects encourage development of industrial-size farms that produce more manure and more greenhouse gases, no matter how the waste is used.

Even its promoters acknowledge RNG may have an uphill fight in the long run as the nation shifts to electric vehicles, displacing the natural gas that powers some bus systems, for instance. But for the near term, Wade said, he’s still bullish.

“Until there’s no demand for gas, there will always be a home for gas,” Wade said.

Burroughs was one of the first farmers in New York to take advantage of the state’s incentives for biodigesters. From the outside, his manure digester looks like a big gray bunker — a rectangular concrete block about waist-high, 274 feet long by 75 feet wide — and it’s covered in a foam insulation that’s rubbery to the touch and sounds hollow when tapped. The digester underneath goes about 16 feet underground, he said.

Probes poking up through the cover show the temperature of the manure, which is heated by electricity to as much as 101 degrees Fahrenheit, which allows bacteria to break it down and release methane. Every four years, Burroughs calls in a service to clean the digester, an operation that takes about three weeks.

Burroughs paid for the system with grants from the New York State Energy Research and Development Authority and the Department of Agriculture. But no matter who pays, he said, climate change and the ever-present challenge of handling manure force a reckoning for farmers: “Do you adapt now, or wait?”

When manure goes through a digester, it generates methane, a potent greenhouse gas. Farmers can do three things with the gas — make heat, electricity or renewable natural gas, said Patrick Serfass, executive director of the American Biogas Council. Until now, most have made electricity, using some on their farms and trying to find customers for the rest.

Out of about 2,300 biogas-generating facilities of all types in the United States — 317 of which are on farms — around 2,000 make electricity and about 300 make renewable natural gas, Serfass said. But nearly 90 percent of the digesters now in development are for RNG, he said.

That’s helping to turn around an extended decline in the number of farmers building digesters. The number of digesters on farms grew by 21 percent last year after flattening for the prior decade or so, Serfass said.

The systems work best on farms with at least 500 animals. Advocates say they’re optimistic, though, that smaller farms could combine efforts, or that farmers could make the systems more profitable on smaller farms by supplementing manure with food waste, which creates more biogas by volume. But the food-waste idea still faces a hurdle, advocates said, because EPA’s renewable fuel standard — based on credits called renewable identification numbers — doesn’t allow for manure and food waste that’s combined in a single digester.

Still, Serfass and other supporters say the surging interest in RNG may give big farms a more lasting solution to the environmental challenges of handling millions of gallons of manure.

“The fact that manure is collected is the opportunity. To me, that’s the starting place,” Serfass said, noting the huge volume of manure generated on U.S. livestock farms. “What other solution is there?”

The Sierra Club’s Iowa chapter, for one, has a different answer.

“Raising livestock on pasture is a better long-term solution because it eliminates the need for massive manure pits in the first place. Methane digesters are just a Band-Aid on a much larger problem,” the organization said.

The Sierra Club opposes legislation in Iowa to promote digesters, and groups such as Food & Water Watch say an RNG craze will only worsen pollution tied to the big farms that feed it. Food & Water Watch is pressing the California Air Resources Board to remove manure-to-energy’s eligibility under the state’s program.

On the federal level, many lawmakers and the Department of Agriculture are on the farms’ side.

The Agriculture Department has encouraged manure digesters for years through efforts such as the Rural Energy for America Program and other initiatives in the farm bill, renewed every five years. In Congress, Sens. Sherrod Brown (D-Ohio) and John Thune (R-S.D.) are pushing for more, introducing a bill called the “Agriculture Environmental Stewardship Act,” S. 2461, which would provide a 30 percent tax credit for building biodigester systems.

That bill was included in a broader energy package passed in the Finance Committee last year and awaits further action as part of a to-be-determined energy policy overhaul.

“Many Ohio farmers are struggling to safely dispose of livestock waste that could be used for renewable energy,” Brown said in a statement to E&E News, adding that his bill would encourage technology needed to convert farm waste into natural gas. “I’m going to keep working with my colleagues to ensure that we can get this done.”