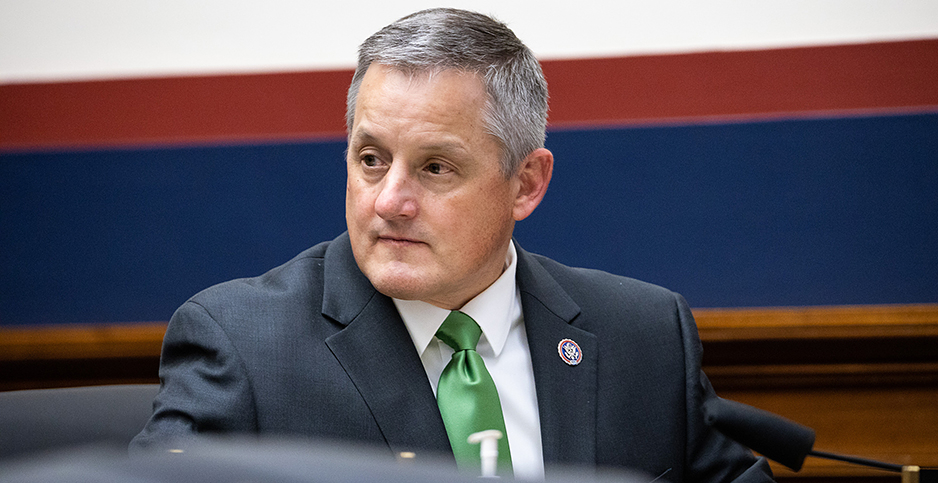 Members of the House Natural Resources Committee debated its $31 billion reconciliation bill yesterday for close to eight hours, and they may not be even halfway finished.

The committee will reconvene Thursday to resume consideration of the measure, released earlier this week, and voting on 14 amendments left over in the queue after lawmakers dispensed of 18 other recommendations in roll call votes to make substantive changes to the legislation, with all but one — from Chair Raúl Grijalva (D-Ariz.) — soundly rejected by the Democratic majority.

Republicans had nine amendments adopted by unanimous consent at the start of the marathon markup yesterday morning. One, from Rep. Lauren Boebert (R-Colo.), would bar dollars in the bill from funding the relocation of the Bureau of Land Management headquarters from Grand Junction, Colo.

Another, from ranking member Bruce Westerman (R-Ark.), would redirect “no less than 10 percent” of funds devoted to a Civilian Climate Corps housed within the Fish and Wildlife Service to “mitigate or repair damage on public lands caused by illegal border crossers.”

Unsatisfied with these victories, however, Republicans are looking toward next week prepared to continue offering dozens of doomed amendments in acts of defiance against a package they deride as a partisan wish list of reckless spending.

“What’s the rationale, what the heck is going on, and what are Democrats trying to do this country?” Westerman bemoaned in his opening remarks.

There were familiar policy debates and well-established partisan dynamics at play during the virtual markup yesterday. Members debated several Republican amendments designed to put Democrats on record supporting outsourcing mineral production to countries with poor environmental records and histories of child labor practices, if they proceed with provisions in the bill intended to protect national monuments and sacred tribal sites from potentially destructive mining activities.

Republicans also sought to overturn language in the bill to make it more expensive and onerous for companies to drill for oil and gas on federal lands, asking Democrats if they were hoping to kill jobs, boost foreign dependence on oil and remove a crucial revenue source that funds public education and social services in New Mexico.

The exchanges laid bare just how far apart the two parties are on major planks of the Democratic agenda, and just how difficult it will be for Democrats and Republicans to agree on anything.

The Civilian Climate Corps is a benign enough concept: a green jobs training and placement program mirroring the Civilian Conservation Corps of the 1930s and 40s.

Efforts to revive and modernize this program have been around for a long time, but the idea has gained more prominence in the last few years among progressive activists who see it as a means of creating jobs while combating climate change.

Congressional Democrats and the Biden White House, eager to please their base, have promised to make “robust” investments in a CCC in various parts of the reconciliation package. The House Natural Resources Committee wants to invest more than $3 billion in the effort (Greenwire, Aug. 26).

Last year, while there was some bipartisan appetite for authorizing funding for service work in the outdoor restoration field, Republicans have stayed largely silent on the question of whether such a program should have a designated price tag. They are now making their position clear — that the CCC is not only a waste of money but a terrible idea that ought to be entirely scrapped.

Boebert offered an amendment that would strike out all funding for the program, saying the investment “should not be allowed” when so many existing work sectors are struggling to fill jobs.

“My grandfather worked for the CCC, and I remember him telling me how terrible it was, how backbreaking the work was,” Westerman noted. “We don’t need another FDR program, and the idea that this is going to help land management is a false idea, as well.”

Rep. Cliff Bentz (R-Ore.), also piled on, calling the CCC “delusional.” He went on, “Why would we think people are going to suddenly jump at doing really, really hard, dirty, dangerous work because we offer them $15 an hour? That’s not going to happen.”

The committee will vote on this amendment next Thursday; it’s expected to fail.

Democrats are making the case for their reconciliation package by saying it will constitute the most aggressive response to climate change to date. They are also citing recent natural disasters and extreme weather events — most notably Hurricane Ida, the fifth-most powerful hurricane to make landfall in the United States, which devastated Louisiana — as reasons for Congress to act quickly and decisively.

“Are we just going to sit here and watch how hurricanes get worse and worse in the Southeast? Heck, no,” said Rep. Darren Soto (D-Fla.).

But Republicans called into question yesterday just how much the bill would help, and whether it was appropriate for Democrats to be moving ahead with their reconciliation markup as Louisiana was still assessing federal disaster relief needs.

Rep. Garret Graves (R-La.) — patching in remotely during different portions of the Natural Resources Committee markup from the back of a pickup truck, with his storm-raged district in the background — berated Democrats for forcing him to attend the meeting as he responded to his constituents.

“We don’t have water … we don’t have electricity and, in fact, we have active search-and-rescue operations going on as we speak,” he said. “Quite frankly, the fact that I’m fricking sitting here right now even spending time with y’all is ridiculous.”

Rep. Tom Tiffany (R-Wis.), was altogether incredulous that climate change had any bearing on Ida’s wrath or any of the other major storms in recent weeks and months.

Rep. Rashida Tlaib (D-Mich.), meanwhile, was livid at the suggestion there is no urgency to move the reconciliation bill at this time.

“My families have been flooded four times — four times — taking sewage out of their basements,” she said of her constituents. “People are walking out in their streets, residential streets, where there are streets and parks and homes [that have] literally turned into rivers. … We can do so much more right now in getting to work instead of making excuses.”

She also turned on Graves: “The conditions your residents are complaining about? That’s what our communities are doing every single day.”

Grijalva, at one point during the extended markup, suggested the two parties weren’t likely to find common ground anytime soon on achieving a transition away from fossil fuels as a salve for irreversible climate change.

“Some people don’t see it that urgent. Some people think we have a lot of time not to deal with the climate crisis, and as such, the expenditures we’re talking about here, and the resources dedicated here, are seen as extraneous,” Grijalva said.

“A transition, in your mind, is decades and years away,” he continued, addressing Republicans. “As I see it, a transition needs to be accelerated, beginning now. If not, this is going to get worse for all of us. And if we don’t agree on that, we’re going to have trouble.”