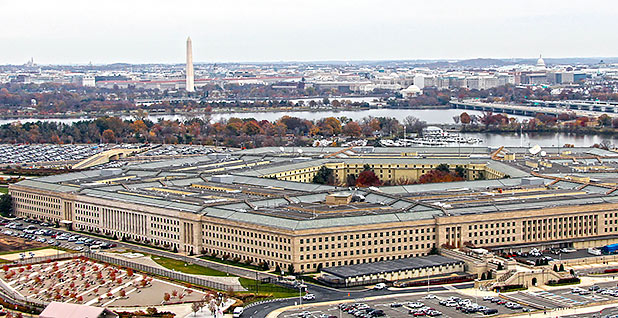 The task force ended in March, a spokesperson said, and the group’s tab on the Navy’s energy, environment and climate change website was removed sometime between March and July, according to public archives.

Retired Navy Rear Adm. Jon White, who ran TFCC from 2012 to 2015, said its goal was "never meant to be a never-ending thing," but to "get things down" and have climate change considerations incorporated into the Navy’s planning.

But he said he sees "little evidence" that the task force’s work has been fully incorporated into the Navy’s decisionmaking process.

"It was a very quiet canceling of the task force. I didn’t know about it; no one told me," he said. "Usually, when you stand down a task force, you want to be able to go in there and declare victory."

‘All goes back to the White House’

The task force did not release a final report, nor has the Navy indicated the exact offices that will be taking over the task force’s area of responsibility.

The Navy spokesperson did provide a link to what is now the task force’s final report on the Navy’s strategic outlook for the Arctic, released in January.

Hill said that while it was important to mainstream the TFCC processes, she remains concerned that ending the task force has more to do with a pattern of climate change denial in President Trump’s administration.

"It’s consistent with the patterns we’ve seen: Efforts with the title ‘climate change’ have either been suspended or renamed," Hill said.

"By not mentioning climate change, we are signaling the events that we’re experiencing now, the impacts, are not something that immediately needs to be attended to and planned for," she added.

White said the president’s insistence that climate change is not a national security threat has led to a culture in Navy leadership where people either do not care enough about the matter or they are too afraid for their careers to fight for climate considerations.