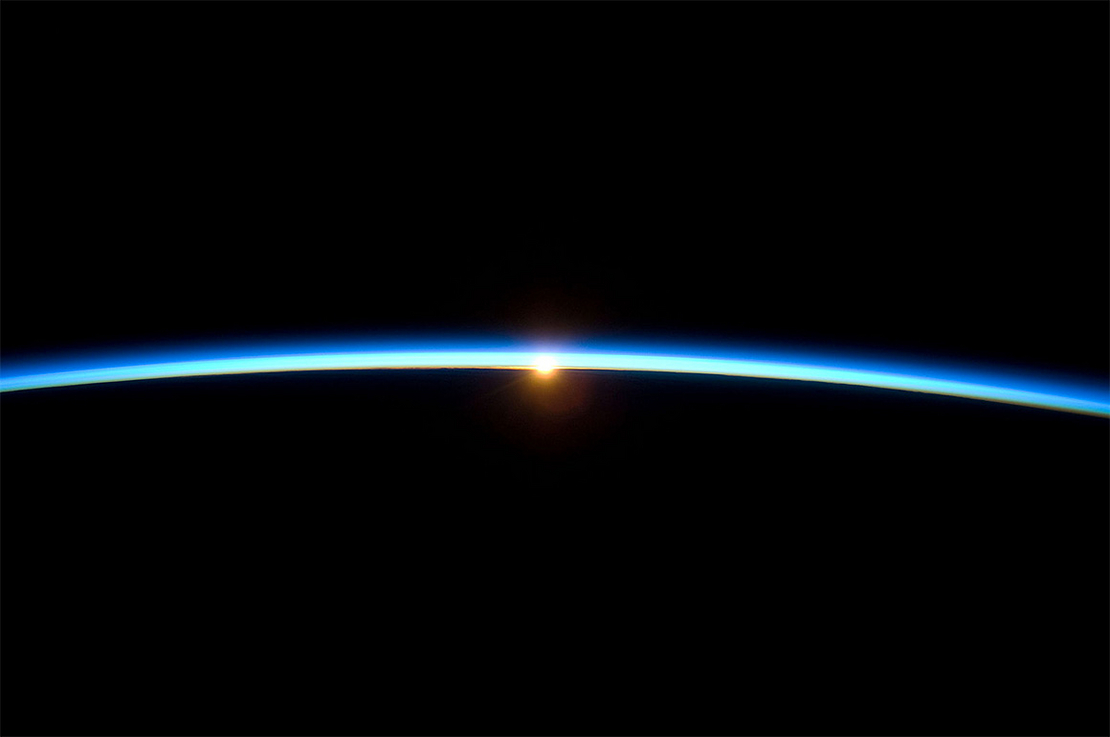 Earth's atmosphere is seen as a blue line from the International Space Station at sunset. NASA/Wikipedia

Federal researchers are hoping that a cheap, 21-pound glider with stubby wings will help them solve a daunting climate challenge: How to thoroughly explore the Earth’s upper atmosphere.

The stratosphere, which begins between 26,000 and 47,000 feet above Earth, depending on whether you’re at the poles or the equator, is home to the ozone layer, which protects people from harmful sun rays and is vulnerable to pollutants.

Major emissions of climate-warming greenhouse gases collect in the stratosphere, but at the moment it remains one of the least examined layers of the atmosphere. Weather balloons — the traditional tool for exploring the upper gases enveloping the planet — can get up there. They carry a packet of instruments that can measure the weather and identify, or even capture, samples of pollutants.

But that’s where the trouble begins, according to Colm Sweeney, who’s investigating the problem for NOAA.

Weather balloons deploy parachutes carrying instruments and their data, packed in a Styrofoam container. The parachute drops into the the lower atmosphere where it is often driven off course by high winds. They can often be sent into thick forest or sometimes the ocean.

“Then we have to go out and find it,” explained Sweeney in an interview.

Because the parachutes and their data are frequently lost, NOAA has refrained from using more expensive instruments in the stratosphere and has been reluctant to increase the number of ultra-high flights using balloons. At the same time, improved computer models require more data from the stratosphere to track the rise of global warming.

“We’ve been trying to find people to fix this for at least a decade,” Sweeney noted.

Three years ago, he called one of his former college professors, who suggested that Sweeney consult the professor’s son, who teaches a course in aeronautical design at Arizona State University.

The teacher, Timothy Takahashi, and one of his graduate students came up with the design of a smart, automated glider to carry the cargo. After being dropped from the balloon in very thin air, the glider’s wings help it gather speed so it can steer its way through high winds and return to its launch location.

That was the birth of HORUS, which stands for High-altitude Operational Return Unmanned System. The drone found a sweet spot in the often hyper-expensive economics of stratospheric exploration.

The prototypes of HORUS developed at Arizona University were cheap, made from fiberglass and foam. While the idea of a space glider seemed like an oxymoron to many people, Sweeney thought it might be built for less than $2,000.

Space satellites, which orbit Earth at heights of around 186 miles, can measure emissions in the stratosphere from high above it, but they cost millions of dollars. New studies suggest that data collected from long distances may contain errors (Climatewire, Nov. 9).

The glider can collect and identify emissions directly.

On its downward journey home, HORUS can take multiple samples by using a long plastic tube. Starting in the nearly airless conditions at 90,000 feet, layers of air captured in the tube mix very slowly. That means NOAA can later analyze emissions collected at different altitudes on the way down.The system of measurement developed by NOAA is called Air Core.

If HORUS avoids getting regularly lost by using its autopilot system, Sweeney predicts it will be able to carry “better instruments because I’m not going to lose them."

That information might also help prosecutors find previously unknown polluters. That will require more precision. We need to be damn sure that we’re comparing apples to apples,” explained Sweeney.

The prototypes of HORUS developed at Arizona University were shown to a defense contractor who made a larger, more efficient version with a 6-foot wing span. In May, Bianca Baier, Sweeney’s co-investigator at NOAA, oversaw test flights at Edwards Air Force Base in California, where HORUS was released at 75,000 feet.

It hit 200 mph as it soared downward and punched through 60 mph winds. Then it delivered its 10 pound payload next to the site where it was launched.

One reason it was difficult to find experts to help develop HORUS, Sweeney believes, is because the market for smart drones is focused on missions a few hundred feet above Earth. Entrepreneurs have built them for more mundane tasks, including delivering pizzas during rush hour.

The potential of collisions with aircraft has caused the Federal Aviation Administration to impose rules that prevent drones from flying higher than 400 feet. The next step for HORUS is getting approval from FAA to exceed those height limits. NOAA plans to use gliders that can pop parachutes at around 18,000 feet.

That slows it down so it can be seen by airline pilots.

The need for more climate data is growing. Sweeney estimates that as many as 10 other nations may be interested in HORUS because more elaborate climate models require more frequent collections of data from the stratosphere.

Meanwhile, he points out, the space glider is becoming still cheaper. “We found we can make new parts for them using three-dimensional printers.”