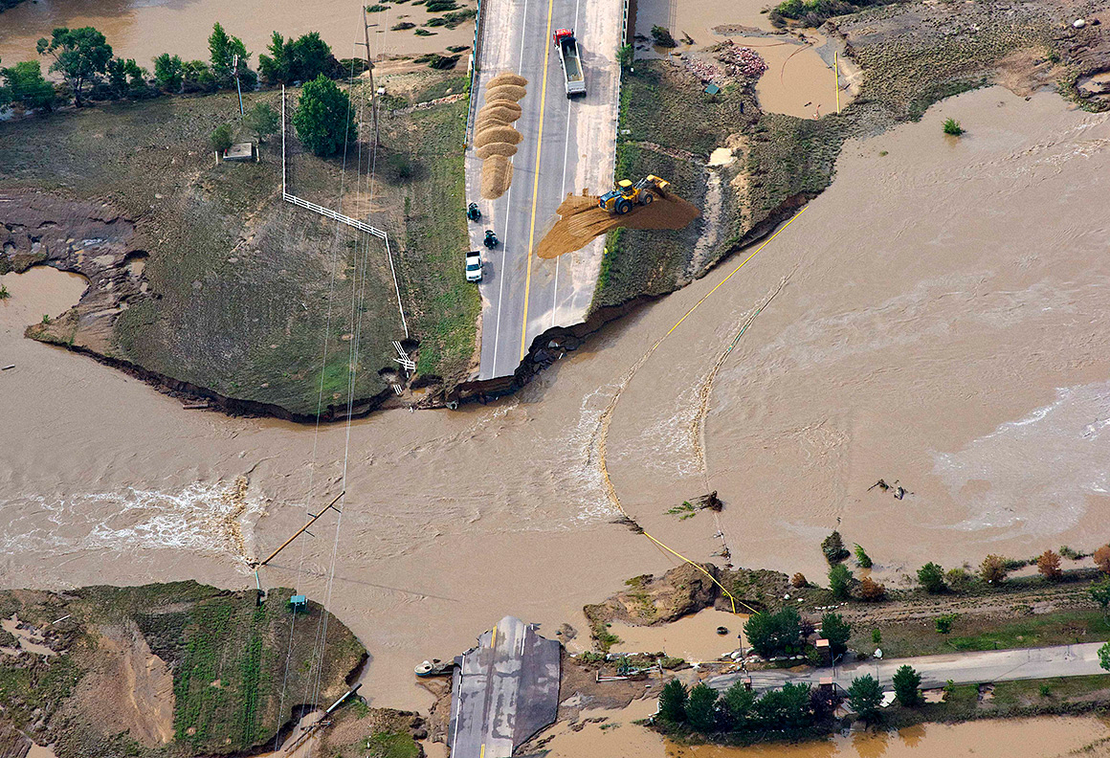 Floodwaters washed out a highway along the South Platte River in Weld Country, Colo., after heavy rains in 2013. John Wark/AP Photo

Nearly a quarter of the nation’s road miles are at risk of becoming impassable during a flood, according to a groundbreaking new study that documents the surprising vulnerability of key U.S. facilities such as roads, hospitals and power plants.

The analysis by the nonprofit First Street Foundation aims to fill a gap left by flood models that have focused on residential risk. That includes First Street’s own analysis last year that showed far more homes are in danger of being flooded than the federal government projects.

Using modeling that incorporates climate change, First Street’s latest report quantifies the huge current and future number of critical facilities and road segments that would be shut down by an average flood.

“There’s so much risk in the country that you would not expect,” First Street Executive Director Matthew Eby said, adding that he was “blown away” by the number of critical facilities such as medical centers that a flood would render inoperable.

The report comes as the Biden administration is pressing Congress to approve a massive infrastructure bill that includes billions of dollars that would address the problems First Street identified.

Nearly 2 million of the nation’s 8.4 million miles of roads cannot withstand a flood and would be forced to close, according to First Street’s analysis. Many of the roads identified in the report were shut down last month when Hurricane Ida swept from Louisiana to New York.

Flooding also would shut down 25 percent of the nation’s critical facilities, which include hospitals, police and fire stations, airports, and public-works plants, and 17 percent of “social facilities” such as schools, government buildings and houses of worship.

The percentage of facilities and roadways that could not withstand flooding is projected to grow by 1 percent to 2 percent by 2051, according to First Street’s analysis.

First Street conducted its analysis by comparing current and future flood levels with so-called operational flood thresholds set by government and industry groups. For example, roads are deemed impassable if they have more than 6 inches of water on them, and airport runways are closed when more than a foot of water accumulates.

First Street calculated the likelihood that flooding would cause a facility or road segment to reach the water level at which it is deemed inoperable or impassable.

“The standard to which we’re building infrastructure isn’t the standard that you would expect,” Eby said.

First Street also analyzed at the state, county, city and census tract level the flood risk to infrastructure and roadways as well as commercial and residential buildings.

Not surprisingly, the counties and cities with the most flood risk are concentrated in Louisiana and Florida. In parishes along Louisiana’s southern coast, flooding would disrupt almost every mile of road and critical facility, First Street says.

Notably, infrastructure and buildings in West Virginia and Vermont also have significant risk of being overwhelmed by flooding.

In West Virginia, 46 percent of the roads in the state and 51 percent of the state’s critical facilities — the highest state-level figures — would be closed by flooding, First Street found.

Vermont also is vulnerable to pluvial or rain-driven flooding.

The states with the lowest risk of floods forcing the closure of roads, infrastructure and buildings are Minnesota, Oklahoma, Kansas and Georgia.

First Street’s latest report builds on its growing analysis of the nation’s flood risk. The foundation-funded group gained national attention last year when it counted the number of homes that face a 1 percent annual chance of being flooded and found millions of homes to be at risk even though federal flood maps placed them outside of local flood zones.

First Street’s Porter said small counties and municipalities could use the group’s latest analysis to plan for climate change and increased flooding.

“Most communities don’t have access to high-quality information about flood risk,” Porter said. “Now you have the data to understand what’s at risk to start to build a plan [involving] adaptation measures, where to plan future infrastructure and how to upgrade current infrastructure.”