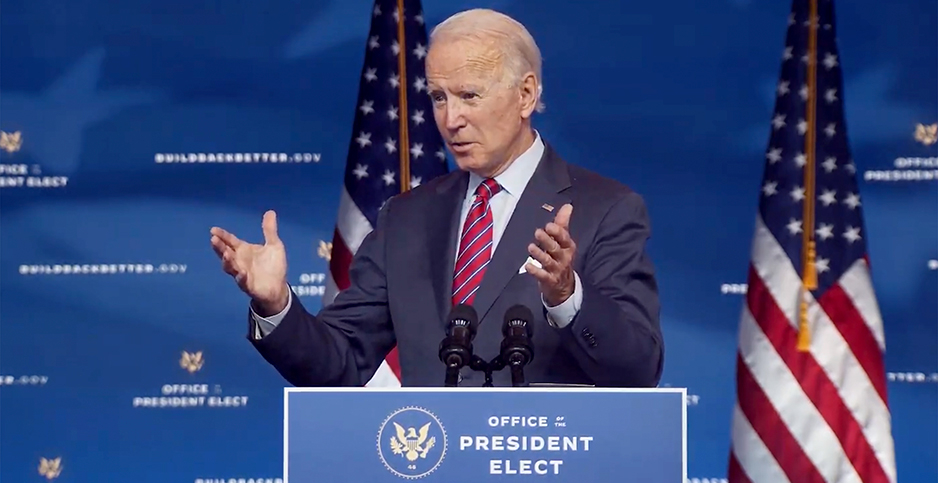 President-elect Joe Biden wants EPA to play a central role in his administration's response to climate change, but whomever he chooses for EPA chief will face a variety of obstacles, including agency morale and congressional gridlock. CNP/Polaris/Newscom

Former EPA Regional Administrator Judith Enck recently spoke with her old staffers for a postelection celebration of EPA’s golden anniversary. She came away with a dour forecast.

"The new administrator is going to have to arrive with a 55-gallon drum of smelling salts to bring the agency back to life," said Enck, who oversaw the New York-based Region 2 during the Obama administration and is now president of Beyond Plastics.

"This was a very challenging four years for environmental professionals," she said. "And a bunch left."

President-elect Joe Biden has big ideas for EPA. But to execute them, his administrator will first face an unsexy, bureaucratic slog to get the agency back to full strength. Those considerations are shaping the transition team’s search as well as progressives’ outside pressure campaigns.

Biden is expected to announce his EPA pick in the next two weeks.

Rejuvenating federal morale and rebuilding scientific capacity top the agenda in every corner of the Democratic Party.

The Trump administration has moved to restrict the types of research EPA can use for regulations, and an exodus of federal scientists has left hundreds of top science positions vacant.

The need to reverse those trends is a point of agreement for activist and establishment Democrats trying to shape EPA’s future.

Also high on Democrats’ agenda is environmental justice — but this issue is where the left-center consensus begins to break down.

Biden has promised to prioritize communities of color and vulnerable populations. His plans call for 40% of climate funding to reach disadvantaged communities and for prioritizing environmental justice in permitting decisions.

That mandate means the next EPA administrator needs firsthand experience with people who live on the fence line of polluting industrial areas, activists say. They point to California’s cap-and-trade regime as an example of climate policy that keeps pollution in poor Black and Latino neighborhoods.

That has put a target on Mary Nichols, chair of the California Air Resources Board and a front-runner for Biden’s EPA. Nichols has the backing of prominent Democrats like Senate Minority Leader Chuck Schumer of New York.

The Biden team has also faced criticism from congressional allies over how white his Cabinet is shaping up. The Congressional Hispanic Caucus and Rep. Jim Clyburn of South Carolina, the Hill’s highest ranking Black Democrat, have both urged Biden to diversify — potentially lending weight to activists’ pressure against Nichols, who is white.

Another top consideration for the Biden team is who could win confirmation in a Senate controlled by Republicans or essentially tied. The administrator would also play a key role in building congressional support for funding Biden’s climate plans, like retraining fossil fuel workers.

That could boost Collin O’Mara, president and CEO of the National Wildlife Federation, which has cultivated a nonpartisan profile in conservation. O’Mara advised the Biden campaign on environment and infrastructure issues, and he served in the Delaware Cabinet with Beau Biden, the president-elect’s late son.

The EPA pick will not only steer that agency but could help shape the entire administration’s response through their role as a Biden adviser.

When he announced his foreign policy team, including John Kerry as international climate envoy, Biden suggested his Cabinet won’t just take marching orders from the White House: "They’ll tell me what I need to know — not what I want to know, what I need to know."

With such power to influence Biden’s climate policy, it would be a waste to elevate someone whose view of climate solutions merely echoes Kerry or Biden, said Anthony Rogers-Wright of the Climate Justice Alliance.

"For this position especially, we need someone who’s going to have the political valor and the temerity to say, ‘All due respect, Mr. President, Madam Vice President, I disagree with you, and this is why,’" he said, comparing it to the so-called team of rivals in President Lincoln’s Cabinet.

Although he’s mostly avoided upsetting the left, Biden has not picked any Cabinet members whom progressives consider one of their own. Activists are hungry for that to change with EPA or possibly the Interior Department.

"We need someone who maybe isn’t fully on board with John Kerry’s approach," Rogers-Wright said. "If it’s just these loyalists, then we’ve gone from Trump to diet Trump."