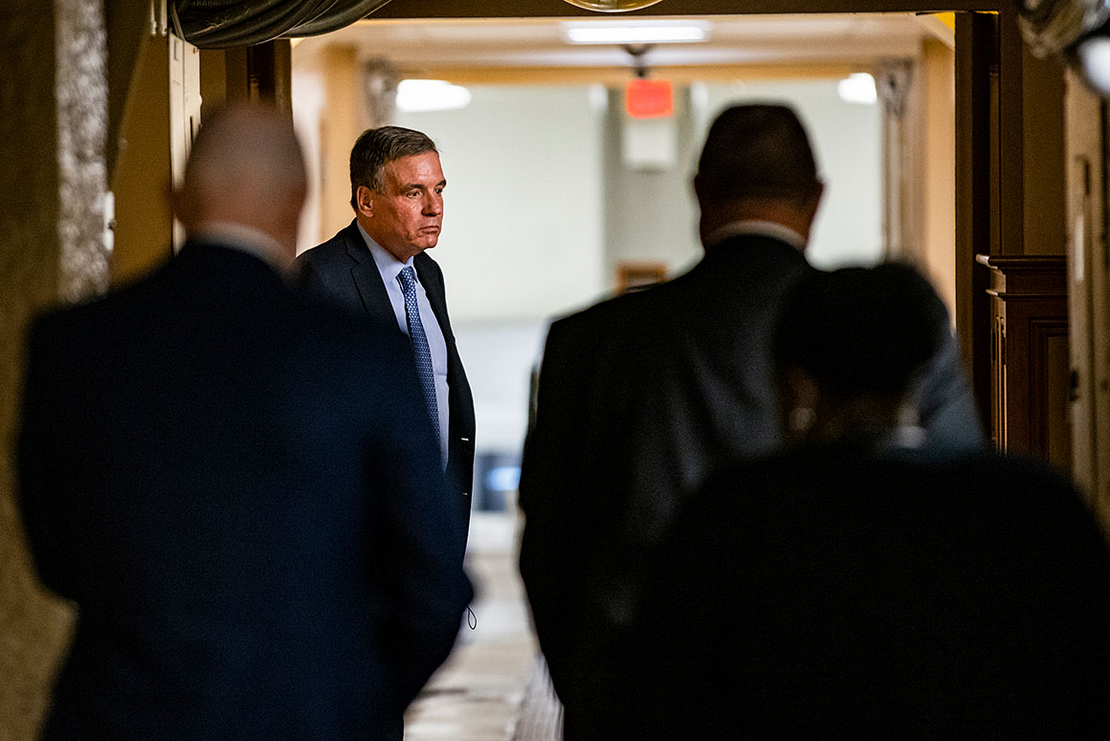 Sen. Mark Warner (D-Va.), one of the bipartisan infrastructure deal negotiators, at the Capitol yesterday as aides worked on finalizing the text. Samuel Corum/Getty Images

The Senate’s bipartisan infrastructure negotiating group finished writing the legislative text for its bill during a rare weekend session yesterday, pushing the deal closer to final passage later in the week.

But hurdles remain as senators look to wrap up the infrastructure bill, which includes $550 billion in new spending, and a separate $3.5 trillion budget resolution in the coming days.

“I want to congratulate the members of the bipartisan group for their efforts,” said Senate Majority Leader Chuck Schumer (D-N.Y.) on the floor last night. “We haven’t done a large bipartisan bill of this nature in a long time.”

Both Schumer and the bipartisan negotiators want to finish the bill, which came in at 2,702 pages, within days. “We want to be done by Thursday,” Sen. Joe Manchin (D-W.Va.) said on CBS’s “Face the Nation.” “We want to move on.”

Once the bill passes, Schumer said the Senate will move quickly to consider a budget resolution, which contains instructions that set the stage for a partisan reconciliation bill that is expected to contain a hodgepodge of Democratic policy priorities.

Democrats are likely to clear the resolution with their narrow majority in the 50-50 Senate, despite some reservations about the price tag from moderates like Manchin and Sen. Kyrsten Sinema (D-Ariz.).

“After the bipartisan infrastructure legislation passes this chamber, I will immediately move to the other track passing a budget resolution with reconciliation instructions, which will allow the Senate to make historic investments in American jobs,” Schumer said.

The movement yesterday came after days of fits and starts on the bipartisan bill. The legislation cleared a procedural hurdle Friday, setting the stage for the weekend session, but the negotiating group has blown past several self-imposed deadlines as they worked out kinks in the deal.

The deal contains a raft of money for climate resilience, electric vehicle charging, abandoned mine cleanup and the ongoing Western drought. It also includes the energy bill recently approved by the Energy and Natural Resources Committee, S. 2377 (E&E Daily, July 29).

The next few days could see some sticky amendment votes. If the bill passes, negotiators will still have to deal with potential objections from House Democrats who want to see it move in tandem with the reconciliation bill and could be loathe to accept the Senate’s product.

“I respect that we have to get Sen. Sinema and Manchin’s vote on reconciliation,” Rep. Alexandria Ocasio-Cortez (D-N.Y.) said on CNN’s “State of the Union.” “They should also respect that there’s a very tight House margin, and that we have to be able to uphold our end of the bargain as well.”

House Transportation and Infrastructure Chair Peter DeFazio (D-Ore.) has also been pushing to conference the Senate bill with the House’s infrastructure package amid fights about water and lead pipe funding (E&E Daily, July 30).

EPW Chair Tom Carper, who for days has griped that the deal did not follow the funding formula laid out in his panel’s water infrastructure bill, said Friday his concerns had largely been addressed.

The legislative text would provide more than $23 billion for drinking and wastewater projects, as well as billions of dollars for restoration projects in the Great Lakes and Chesapeake Bay, and money to tackle “forever chemicals.”

The bill would provide $15 billion for removing lead service lines across the nation, a far cry from the $45 billion President Biden had said was needed to get the job done, or the $60 billion the water sector has called for.

The bill says less than half of that money should be distributed as loans that could be forgiven while the remainder would have to be repaid. A spokeswoman for Carper signaled the senator reached a deal but hopes to take a more ambitious approach through reconciliation.

“After weeks of negotiating, Carper secured agreement on water infrastructure to address his priority that the bill’s water provisions not abandon underserved communities. He is pushing for reconciliation to make major investments in climate, enviro justice, & clean water access,” tweeted Rachel Levitan.

Carper — who is set to manage the bipartisan bill on the floor — told reporters: “It’s still a work in progress. We’re coming at the climate crisis in a lot of different ways, but there’s plenty of work that can be done and needs to be done in the reconciliation package.”

The budget process that’s set to begin later in the week is the key to unlock Democrats’ climate policy dreams, but it marks only the beginning of a long road.

The linchpin of the bill’s climate provisions is expected to be a clean electricity standard that targets 80% clean power by 2030, administered via a system of direct payments and fees to fit into the arduous reconciliation rules.

Progressives are also pushing for more money for electric vehicles and clean buses, on top of a Civilian Climate Corps and other provisions (E&E Daily, July 30).

Key to that vision is Manchin, who controls a critical swing vote and chairs the Senate ENR Committee, which could be charged with writing the CES and other policies (Climatewire, July 20).

Manchin said Friday he is open to a CES if it does not “eliminate all fossil completely.” “I’m open to every discussion, but there’s not going to be elimination, I can assure you,” Manchin told E&E News when asked about a CES.

That’s an issue that could ruffle progressives and climate hawks, who largely do not want to see natural gas or other fossil fuels counted as clean energy.

Manchin later told reporters he expects ENR to be tasked with writing a roughly $200 billion slice of the reconciliation bill. “As far as the content, yeah, it will come through us,” Manchin said.

Sen. Martin Heinrich (D-N.M.), a member of ENR, said the infrastructure deal and reconciliation bill would ultimately mark two steps of many to address climate change.