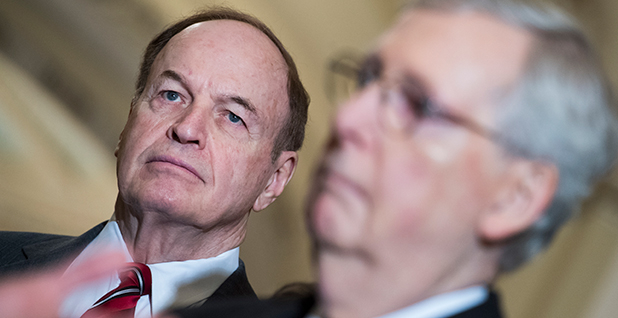 Several environmentally sensitive border areas would be protected and EPA would see a small funding boost in a bipartisan border security and spending package unveiled late last night in hopes of averting a government shutdown tomorrow.

The Senate will go first in taking up the legislation today, and then the House will act later this evening to send the legislation to the president’s desk. If the funding deal is not in place by midnight tomorrow, parts of the government will be forced to shut down.

Conferees last night formally signed off on the legislation, which would provide $1.375 billion in U.S.-Mexico border barrier funding and carry the seven unfinished fiscal 2019 spending bills, including Interior-EPA. The failure to pass those bills late last year sparked the recent 35-day government shutdown.

Under the agreement, federal workers would get a 1.9 percent pay raise, and the Coast Guard would get funds to buy its first new ice cutter in decades.

The seven spending bills largely reflect bipartisan deals reached at the end of the last Congress by appropriators that were not acted on because of the impasse over border funding.

According to summaries, provided by both Democrats and Republicans, the legislation would provide $35.6 billion for Interior-EPA for fiscal 2019, a figure about $300 million above current spending.

The Interior Department would receive about $13 billion next year, about $95 million less than current spending.

EPA, which the White House sought to cut by more than $2 billion, would see a small increase of $25 million to $8.8 billion, summaries show.

Water Infrastructure Finance and Innovation Act grants would get a small increase after being marked for deep cuts by the Trump administration.

The National Park Service would see an increase of $20 million to $3.2 billion for fiscal 2019, a notable victory for the agency after the White House proposed a more than $500 million cut.

The Bureau of Land Management would see a $14 million increase to $1.3 billion, while the Fish and Wildlife Service would get a $17 million cut to $1.58 billion.

The Bureau of Indian Affairs and Bureau of Indian Education would be largely level funded at $3 billion, while the Land and Water Conservation Fund would see an increase of $10 million to $435 million.

As expected, a host of new, controversial environmental and land policy riders pushed by House Republicans were not included in the final package.

Riders returning from last year include a provision treating biomass emissions as carbon neutral and another exempting certain agricultural practices from the Clean Water Act.

The legislation does not contain any emergency aid for national disasters, nor does it contain any extensions of renewable energy tax provisions.

A provision, pushed by Democrats, to provide pay for contractors who were furloughed during the recent government shutdown was left out, too.

Democrats cheered the yanking of what they saw as objectionable riders, including those related to delisting gray wolves and scrapping the Obama Clean Water Rule. The bills also don’t prohibit money for the international Green Climate Fund.

Appropriators stressed that the 1,159-page bill represents a compromise, with trade-offs made by both parties in hopes of averting another shutdown.

"We cannot repeat the disastrous government shutdown, so it is incumbent on Congress to come together to responsibly fund our government. This legislation represents a bipartisan compromise and will keep our government open while funding key priorities," said House Appropriations Chairwoman Nita Lowey (D-N.Y.), who stressed that the deal denies funding for a concrete border wall.

Other sections of the spending package include:

President Trump has not yet said he would sign the legislation, but his tone softened yesterday from earlier in the week, when he said he was "not happy with the legislation."

"We’ll be looking for land mines," said Trump, who promised a "very serious look" at the bill and said he appreciated all the work Republicans had done in going up against the "radical left" in negotiations.

The president reiterated that he does not want to force a shutdown. "A shutdown would be a terrible thing. I think a point was made with the last shutdown; people realized how bad the border is, how unsafe the border is. And I think a lot of good points were made. But I don’t want to see another one. There’s no reason for it," he said.

Notably, Trump is due to fly to his Mar-a-Lago estate in Florida for the weekend, something he avoided doing during the last lapse in funding.

Rep. Mark Meadows (R-N.C.) the head of the Freedom Caucus and a close Trump ally, said the president would either sign the legislation or a stopgap spending bill if there are too many extraneous provisions included in the deal.

Indeed, the Freedom Caucus, which pushed for the last shutdown, introduced a bill yesterday that would provide a week’s worth of funding in case Trump rejects the bipartisan legislation.

"I fully expect the government to continue to operate," said Meadows.