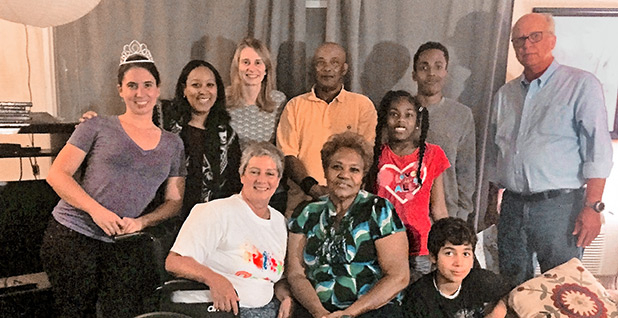 LOS ANGELES — Erica Hart lives in a city where people don’t typically talk to their neighbors. She ignored that unspoken protocol when she knocked on every door in her three-story apartment building, looking for allies in a fight to limit climate change.

A few weeks later, a group of budding environmentalists filled the living room of Hart’s apartment in the Palms neighborhood of West LA, about 6 miles east of the Pacific Ocean. As they munched on popcorn, fresh berries, cookies and snap peas, they detailed lifestyle changes underway.

Monica Casabella, 61, turns off the water while soaping up and washing her hair in the shower. Regis Mesko, 55, and son Nico, 11, take shorter showers and started recycling trash. Julia Stanton, 29, stopped ironing clothes and is using the dishwasher less. Samuel Hailu, 17, and his family merge small wash loads into one big dryer load. Melanie Robinson, 42, put her lights on timers.

Hart, 28, a documentary filmmaker, put a bucket in the shower and uses water caught there to flush her toilet. She’s recycling more, rides her bike, walks and takes the city’s expanding train system when possible. She eschews paper towels and other one-use products.

The meeting in Hart’s home had all the makings of a book club, but one focused on the planet. Those who attended are working through a book about climate and other sustainability issues. They’ve joined a program called Cool Block, now running in Los Angeles, Palo Alto and San Francisco. The pilot tests whether neighbors linked in an ensemble will change their behaviors and cut carbon emissions blamed for global warming.

"It’s beyond obvious that modern technology has clearly harmfully impacted the planet," Hart said. "You see it every year. The storms are getting worse. We have major, major storms, like once-in-a-lifetime storms, multiple times a year. That’s so scary."

The Cool Block pilot comes out of a book with the same name by David Gershon. He previously wrote "Low Carbon Diet, a 30 Day Program to Lose 5,000 Pounds." It gives a road map to shrink greenhouse gas emissions. But, he conceded, "the majority of people by themselves don’t wake up in the morning saying, ‘How do I lower my carbon footprint?’"

Gershon’s latest effort aims to cut carbon pollution at the household level. It uses a bit of peer pressure combined with what he calls people’s instinctive desire to connect with neighbors. That element attracts many participants, he said. There’s work on disaster preparedness, a resonant issue in earthquake-, flood- and brush-fire-prone California.

"The real issue is the quality of life on the block I live on," said Gershon, who’s studied keys to behavior change. "People who know their neighbors, they feel connected, they feel safe" and better prepared for disasters. The peer support also results in people making changes that cut greenhouse gas emissions, he said.

Gershon, the Empowerment Institute he founded and the three cities hope to expand the effort after the pilot ends. The cities are helping with funding and other resources for the pilot.

The bigger goal is a three-year program called Cool City Challenge, which would follow the pilot. It aims to enlist a minimum one-quarter of each community’s blocks and get participating households to cut their carbon footprint 25 percent. It also will provide a platform for testing and adopting technologies that buttress behavior change, a Lawrence Berkeley National Laboratory report said. The lab is working on Gershon’s effort.

The program is needed given the lack of federal action on climate change, the LBNL report said. Some cities have approved or are looking at climate plans but lack resources to take action. People’s choices become central, it said.

While "climate change solutions tend to focus on technologically based solutions and advances in technology," people are an overlooked component, LBNL said. "After all, people are the ultimate consumers of energy and their consumption accounts for 50-70 [percent] of greenhouse gas emissions."

Hoping others will copy

Los Angeles gave $150,000 for the program, money that’s paid for the Cool Block guidebooks and other costs. City Councilman Paul Koretz said he asked for $100,000 in funding but got more because all 15 council members wanted participation in their district.

The city has 14 blocks involved and plans to add 16 more by the end of fiscal 2016-17 next June, Koretz said. The program eventually could be sizable, he said.

"The goal is to have it spread to other parts of the city and to other cities," Koretz said. "People watch LA very closely. We’re probably one of the most visible cities in the country, if not the world. When we do something interesting, it tends to be modeled by others."

“We have major, major storms, like once-in-a-lifetime storms, multiple times a year. That’s so scary.”

Koretz conceded there’s no guarantee people in the program will stick with their behaviors long term. But he believes many will make permanent shifts. It’s similar to how people in LA now bring reusable bags to stores because the city has a single-use plastic bag ban, he said.

"People adjust to their habits after a while, and it becomes not a big deal," Koretz said. "Hopefully, a lot of this becomes the new normal for the people on these blocks and it spreads."

In Palo Alto, the city donated its normally $150 energy-use home audit to each of the block leaders in the region’s Cool Block pilot. Some group members now have signed up for the analysis, said Sandra Slater, Cool Block area program director for Palo Alto.

The social aspect of the program was a big draw for her groups, Slater said.

"The No. 1 reason that my block leaders have been able to recruit is for the social connection," Slater said. "It’s not about the environmental ethos. They want to connect with their neighbors, and they don’t have a structure to do that."

But once people were in the program, they committed to the environmental part. The social part and the emergency planning component are good ways to attract participants, she said. If the program were just about climate, "you’re only going to get deep greens," Slater said, referencing committed environmentalists.

Slater believes it can have a larger effect than just the few blocks now participating.

Each of the three cities in the pilot has a program manager. In the first phase of the pilot, that person found 10 to 12 block leaders, who were responsible for knocking on every door on their block, armed with a script. Hart in the Palms neighborhood has the only apartment or "vertical" block in LA.

There’s one "learn about the program" meeting, after which neighbors decide whether to join. Those who commit then attend eight more meetings, each focused on a different topic. The ideal size is five to eight households, Gershon said, because larger than that becomes less manageable. About 30 blocks will participate in each city during phases one and two of the pilot. Phase two will implement any lessons learned in phase one.

Rappaport has worked in sustainable home redesigns for several years and made her own home, built in 1926, environmentally friendly when she redesigned it nine years ago. She and her husband added solar insulation, LED lighting and more efficient appliances. They expanded the footprint by one-third but halved power consumption.

Like others in the program, Rappaport said she was interested in the idea of creating more of a community on her street. She initially was "a little skeptical" it would work to unite people the way it happens with a local temple or school, she said.

But she was "very interested in this idea of behavioral change," Rappaport said in an interview at her energy-conserving home, which features a living room with vaulted ceiling covered in reclaimed wood. In her home remodel business, "there’s an awful lot of people in LA who renovate their houses and never think about these things," like how much the power bill will increase when they make a home bigger.

Through Cool Block, "I get to know my neighbors and actually work through and see how much can we accomplish," Rappaport said.

The block Rappaport leads features eight households, including her own. She acknowledged that "some people are really into it, some people maybe less so." They were all interested in getting to know each other and to improve disaster preparedness, she said.

But by the end, "if I get three households that do some stuff to make themselves more sustainable, I will be so happy," she said.

Each household starts by calculating its own carbon footprint. There are benchmarks where people can compare themselves with other countries. The number crunching led to some feeling discouraged in Rappaport’s group. One neighbor with a family that travels by plane frequently lamented that "no matter what I do in my house, my family’s carbon footprint is so big because we have to travel a lot."

Rappaport researched and sent the family options for cutting greenhouse gas emissions when traveling, like choosing nonstop flights, traveling light and traveling during the day. Contrails — the plumes of exhaust behind airplanes — can trap heat. During the day, contrails reflect some sunlight away from the earth, according to the analysis Rappaport found on the David Suzuki Foundation website. It’s a Canada-based group focused on environmental sustainability.

“If we can see a cultural shift towards a sustainable lifestyle, that can make a big difference.”

Rappaport, who’d already made her home energy efficient, has started separating out her biodegradable trash. The city provides green trash bins that can take some food waste. She contacted DirectMail.com to reduce mail sent to her home. Rappaport’s son, David, 14, is taking one of the city’s newly finished light rail lines to school this fall, to cut his mother’s car trips.

People feel some accountability in a group, she said. It’s a situation where you know "in two weeks I’m going to have this meeting. I have to report my results."

Some on her block are talking about adding solar power. Rappaport is approaching a vendor she knows to see whether they can get a better group price. One neighbor suggested pooling funds for a level two, higher-powered electric vehicle charger that the EV owners on the street could share.

"You’re brainstorming, right, so you’re coming up with ideas," she said.

At the same time, she said, it’s important to have apartment dwellers like Hart’s group in the program. While they can’t add solar and probably won’t upgrade appliances, their input is vital, she said.

"It’s a citywide initiative," Rappaport said. "If you can test it and prove that it works in all kinds of neighborhoods, then you know you have something really effective." While it’s fine for wealthy people to buy electric cars, "if you can reach all those different people, then you know you’re really making a dent."