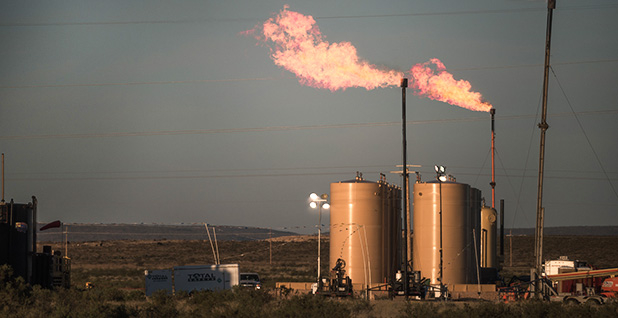 Environmental advocates have been pushing the Bureau of Land Management to do the math on the climate impacts of leasing and developing fossil fuels in recent years.

They are emboldened by a favorable decision last year that sent Obama-era oil and gas leases in Wyoming back to the drawing board for lack of climate analysis. Groups have been stacking up similar wins on the same argument: that NEPA requires it.

But the new rules unveiled yesterday would eliminate the need to look at "cumulative" impacts. They would also erase the obligation to consider downstream or "indirect" impacts of federal decisions, like the greenhouse gas emissions contributing to climate change that result from fossil fuels mined on federal land.

Additionally, the rule could codify a proposed guidance from the Council on Environmental Quality earlier this year that could greatly narrow the scope of projects the federal government reviews for environmental impact.

The changes mean that an oil and gas project under review by BLM in New Mexico, for example, wouldn’t have to consider an adjacent oil and gas project that’s already in production, according to Erik Schlenker-Goodrich, executive director of the Western Environmental Law Center.

Environmental advocates in the West say the changes feel targeted — an attempt to eliminate the very NEPA provisions that have sustained the Trump administration’s rebukes in court.

"When I take a look at this, it seems very calibrated to address deficiencies that we’ve identified," Schlenker-Goodrich said.

Flanked by men in hard hats, the president focused on infrastructure projects, roads and bridges that would be completed faster under the proposed rule changes.

"We’re going to have very strong regulation, but it’s going to go very quickly," he said of the new NEPA.

When asked later how the Interior Department viewed the NEPA changes in light of the administration’s energy priorities, Interior spokeswoman Carol Danko referred E&E News to Secretary David Bernhardt’s comments yesterday. He said NEPA’s cause is "noble" but that it’s "gone off the rails" in practice.

But experts say that although the NEPA changes would affect ever-popular initiatives like road repair, they appear targeted to support energy development.

"There is no question to me that part of the purpose of these proposed changes is to facilitate their energy dominance agenda," said Elizabeth Klein, deputy director of New York University’s State Energy and Environmental Impact Center. Klein was an associate deputy secretary in Interior’s Office of Policy, Management and Budget; she worked at the department under both the Obama and Clinton administrations.

Judge Rudolph Contreras, an Obama appointee of the U.S. District Court for the District of Columbia, blocked drilling on about 500 square miles’ worth of oil and gas leases in Wyoming until BLM had taken into account the cumulative impact of those leases on climate.

The federal agents had acknowledged climate change on a "conceptual level" when they issued the leases but failed "to conduct a more piercing consideration of the consequences of oil and gas drilling before it authorized the Wyoming Lease Sales," Contreras wrote at the time.

The case, brought by WildEarth Guardians and Physicians for Social Responsibility, was inspired by similar suits against coal leases in Wyoming.

With the Contreras success, the argument quickly became a cornerstone for opposition to new drilling across the West. More than 100 wells approved by BLM in Wyoming were stalled by the bureau’s state office after advocates argued that a hard climate analysis hadn’t been done.

Greens haven’t been able to truly block development in the West.

In the case of protested oil and gas drilling permits in Colorado’s North Fork Valley, the Center for Biological Diversity pressed a Reagan appointee in the U.S. District Court for the District of Colorado to vacate a BLM decision. Instead, Senior Judge Lewis Babcock asked the protesters and BLM to look for a solution and for BLM to do a climate analysis (Energywire, Dec. 12, 2019).

But the argument that NEPA requires a hard look at climate impacts has consistently won over the courts and affected federal reviews.

Jeremy Nichols, climate and energy program director of WildEarth Guardians, said his group meant to slow oil development in the near term, but the fight for climate reviews was also about building up a data set for a future presidential administration that would take climate concerns seriously.

"NEPA has been a key tool for us," Nichols said. "This [overhaul] would take that tool away from us."

The oil and gas industry has not ignored the climate battles, intervening in cases like the Wyoming lease dispute to represent its members’ drilling rights.

From industry’s perspective, the green strategy is an abuse of NEPA and a delay-and-conquer method to hamper the right to develop oil and gas resources.

"Radical environmental groups have twisted the intent behind NEPA and leveraged the legal system to their advantage in a coordinated effort to slow and stop process and I welcome the news that President Trump plans stop them in his commitment to make America great again," the American Energy Alliance’s Thomas Pyle said in a statement yesterday.

"I never questioned the merits behind NEPA and no one is honestly talking about a full repeal but it is undeniably outdated and being abused to stop economic growth in the misleading rally cry of environmental climate change protections," he added.

The proposed NEPA revisions face a number of hurdles before they can go into effect. Their fate is likely tied to the presidential election (Climatewire, Jan. 8).

If the changes do go through, there could be additional challenges for developers despite the apparent boon.

Klein of the State Energy and Environmental Impact Center said the new language would likely cause confusion within federal agencies. Initially, some agencies may interpret the changes differently from others, she said.

Klein said she is also unsure of how the changes would hold up in court (see related story).

"If I were in industry, I would be very concerned about how agencies are going to apply these proposed changes and what that means for my project," she said. "And I would consider the litigation risk to have just gone up, significantly."

WildEarth Guardians is still pushing back on oil and gas development with NEPA as a bedrock.

Yesterday, the group and Physicians for Social Responsibility filed a suit in the U.S. District Court for the District of Columbia asking for an injunction on 2,067 oil and gas leases across the West.

"We’re obviously alarmed over this, but ultimately we don’t want better analysis, we want accountability to climate," Nichols said.