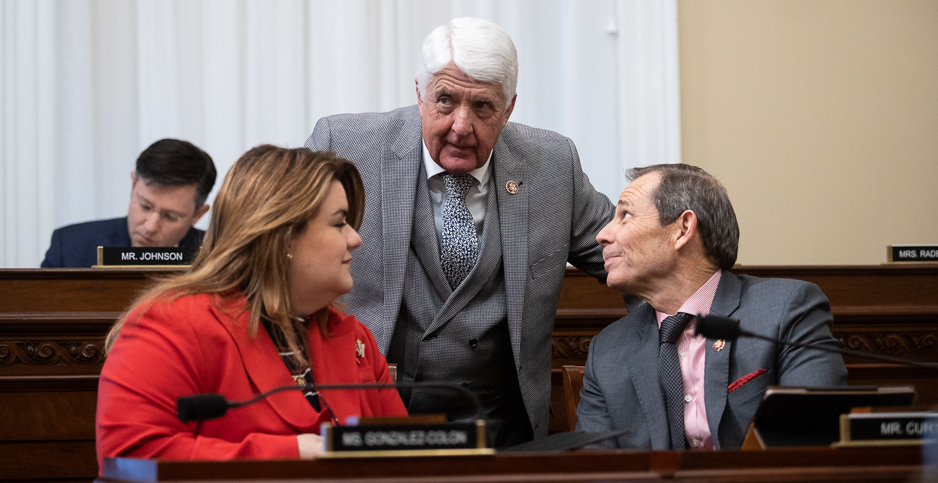 Utah Rep. Rob Bishop (R) is dismissing criticisms he failed to reach out to his Nevada colleagues before securing an amendment to expand an Air Force bombing range in the Silver State, at the same time calling a substitute measure touted by those lawmakers "substandard."

In an interview with E&E News yesterday, Bishop discussed for the first time his role in the fight over the Nellis Air Force Base facility, alternately expressing surprise and frustration that a recent amendment has generated outcry from Nevada lawmakers and environmentalists.

"I’m perplexed and amused by the controversy all of a sudden, as if something was actually snuck into the NDAA, which is entirely inaccurate. Everything was aboveboard," Bishop said, referring to the House Armed Services Committee’s markup of the fiscal 2021 National Defense Authorization Act earlier this month (E&E Daily, July 2).

Bishop authored an amendment, approved on a voice vote, to alter the management of public lands used by the Nevada Test and Training Range (NTTR), which sits on a 2.9-million-acre site northeast of Las Vegas, most of which is overseen by the Bureau of Land Management. NTTR uses portions of the adjacent Desert National Wildlife Refuge, which is managed by the Fish and Wildlife Service.

Under Bishop’s amendment, the Air Force — rather than the Interior Department — would gain the final word in any dispute occurring on 850,000 acres of the wildlife refuge, which critics say would threaten endangered species and the autonomy of tribal communities.

The amendment’s adoption caught Nevada elected officials, and the state’s six-member congressional delegation, by surprise, and Bishop has since become a target of accusations that he failed to engage them before submitting his proposal (E&E Daily, July 9).

"It wasn’t vetted," Rep. Mark Amodei, the only Republican in the Nevada congressional delegation, said of Bishop’s amendment. "And I’m opposed to anything that is not vetted publicly."

Amodei said he had not spoken to Bishop about his motivations for offering the amendment but suspected from the beginning that there were behind-the-scenes machinations that enabled the proposal to be quietly, and quickly, adopted.

"I’m sitting here thinking, ‘Listen, it didn’t get in because Rob Bishop is the craftiest guy in the history of the minority in the United States House of Representatives,’" Amodei said in a separate interview with E&E News yesterday.

"We all know that in the House, the rules are pretty simple: The side with the most votes wins. So for [the House Armed Services Committee] to accept the amendment and for [the House Natural Resources Committee] to waive jurisdiction, Rob Bishop must have had quite a bit of help, and it wasn’t from the minority side of the aisle."

Bishop was not shy in revealing to E&E News that the Air Force had, in fact, approached him with its request, citing his position on the Armed Services panel and his status as ranking member of the Natural Resources Committee.

He noted there also aren’t any Nevada representatives on the Armed Services Committee to whom the Air Force might have come first.

"The language came from the Air Force," Bishop said, adding that both Democratic and Republican staff on the Armed Services panel adjusted the measure before it was adopted by the committee.

Bishop said the military also shared the proposal with Natural Resources Chairman Raúl Grijalva (D-Ariz.) but that Democrats on the panel waived jurisdiction on the matter.

"The concept that is frustrating to me is there was nothing that was done underhandedly, there was nothing done acutely, everything was aboveboard," Bishop added. "Either everyone knew about it or they should have known about it. For people to be surprised now is bizarre."

A Grijalva spokesman did not respond to requests for comment on whether committee Democrats had reviewed Bishop’s language and passed on its consideration.

But Democrats have indicated there are at least elements to the Bishop proposal they actually like. Democratic aides with ties to party leadership worked with the House’s three Nevada Democrats — Reps. Steven Horsford, Susie Lee and Dina Titus — on an amendment that is likely to be considered in relation to the Defense bill when it comes to the House floor next week.

Horsford, Lee and Titus submitted the amendment to the House Rules Committee on Monday, and the proposal attempts to find middle ground. It would satisfy the Nevada delegation and conservationists by denying the Air Force final decisionmaking authority over the wildlife refuge.

It also would, however, still retain stipulations regarding adherence to the National Wildlife Refuge System Administration Act, plus increase the number of days the Fish and Wildlife Service could access the refuge.

"The amendment put forward by the Nevada delegation would reverse the clear threat to over 840,000 acres of unique plant and animal habitats in the Desert National Wildlife Refuge while enhancing tribal access and ensuring military readiness," Titus said in a statement. "We simply cannot allow the largest wildlife refuge in the contiguous United States to be decimated."

Bishop was not impressed.

He acknowledged he did not approach his Nevada colleagues — other than discussing a proposal involving Naval Air Station Fallon and the Fallon Range Training Complex in Amodei’s district — but said he expected Democratic staffers or committee leadership had done so.

He added: "I’m somewhat taken aback and frustrated to think they didn’t understand what was going on because there was no reason they should not have."

Disagreements over the Nellis Air Force Base, which manages the training range, likely won’t be resolved anytime soon: The base has long sought to take control of nearly the entire 1.6-million-acre wildlife refuge, arguing it needs the additional acreage for modern warfare training (Greenwire, Nov. 4, 2019).

While the facility’s current withdrawal is set to expire next year, House lawmakers proposed a 25-year extension in the NDAA. The Nevada congressional delegation, however, opposed an expansion of NTTR in legislation introduced late last year sponsored by Sen. Catherine Cortez Masto (D-Nev.), which would have granted the Air Force an additional 100,000 acres of refuge lands but also would have established a new 1.3-million-acre wilderness area in the state.

"The Air Force basically said it was substandard," he said of the Nevada delegation’s proposal. "It doesn’t meet the needs of the Air Force, not even the slightest way. Obviously there needed to be more discussion over that."

As for his amendment, Bishop said he expects lawmakers to reach a compromise when the NDAA heads to conference, and he insisted that the Air Force will eventually receive additional lands or management authority.

Amodei agreed the issue would be resolved in conference but predicted Bishop’s amendment would not survive the NDAA conference committee, rendering the current scuttlebutt moot.

"I think when you got five people in the Nevada delegation who live in Las Vegas saying, ‘Hey, this is bullshit,’ that will be influential," he said.

He also said he supported Horsford, Titus and Lee’s amendment.