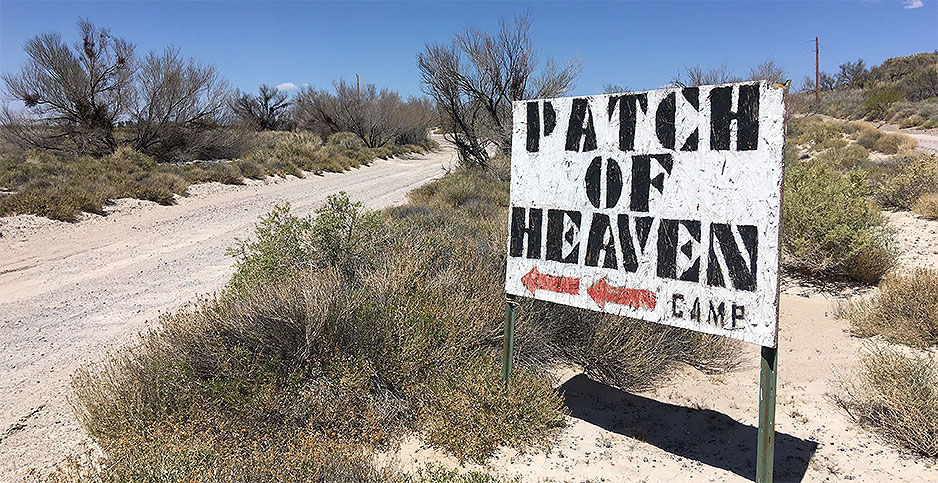 A sign for the Patch of Heaven camp at the Ash Meadows National Wildlife Refuge. Jennifer Yachnin/E&E News

In the spring of 2018, while at his church camp in the Nevada desert, Ministerio Roca Solida founder Victor Fuentes politely brushed off offers of heavy construction equipment to — quite literally — push back against the federal government.

After losing a lawsuit that blamed the federal government for flooding his 40-acre property and watching a new water rights claim be challenged by the Bureau of Land Management and environmentalists, Fuentes publicly announced he plans to destroy an earthen dam at the Ash Meadows National Wildlife Refuge tomorrow.

“I’m waiting no more. I’m going to put my water back,” Fuentes testified at the Nye County commissioners meeting earlier this month. His remarks were first reported by the Pahrump Valley Times newspaper.

Annette Fuentes, who owns the Patch of Heaven church camp with her husband, Victor, told the Pahrump Valley Times that the couple will use a tractor to “reopen” the Carson Slough tomorrow morning.

Neither the couple nor their attorney at the Mountain States Legal Foundation responded to requests for comment.

“What I’m going to do is not against the law,” Victor Fuentes told the county commissioners, prompting applause from the audience.

But in a letter to the couple yesterday, the Fish and Wildlife Service disagreed with his assessment and threatened potential prosecution if he proceeds.

“Even if you had a vested right to all water flowing in the Carson Slough, it would be illegal for you to go onto the Refuge and ‘immediately claim that which is [yours],'” Desert National Wildlife Refuge Complex project leader Kevin DesRoberts wrote in the letter.

DesRoberts added that using heavy equipment on the Ash Meadows refuge could violate the National Wildlife Refuge System Administration Act and the Endangered Species Act, and could be considered criminal trespass and destruction of government property.

“These laws have both criminal and civil penalties that can include prison and monetary fines. If you take the illegal action described in your statements, the United States will pursue all available penalties,” DesRoberts wrote.

Victor and Annette Fuentes have been engaged in a dispute with the federal government since 2010, when the Fish and Wildlife Service erected a diversion on the Carson Slough to safeguard the endangered Ash Meadows speckled dace (Greenwire, April 23, 2018).

That project also eliminated a stream that had run through the campground, which the couple had acquired in 2006 and anointed as the Patch of Heaven. They used the stream, in part, to water trees and fill a small pool where baptisms were performed.

While the Nevada Division of Water Resources sided with the campground owners in 2016, ordering FWS to return a “historic use” flow of 0.003 cubic foot per second to the campground — funneled through a small pipe — the couple have otherwise faced setbacks in federal court.

The U.S. Court of Federal Claims last year dismissed the Fuenteses’ claims that the FWS diversion created flood conditions on their property, resulting in more than $3 million in damages (Greenwire, Oct. 26, 2021).

The Fuenteses are still pressing Nevada’s Office of the State Engineer to declare they have water rights to another .07 cubic feet per second, or about 5 acre-feet of water annually per 10 acres of land, arguing a stream has crossed their property “since time immemorial.”

But environmentalists and the BLM have objected to the request, saying it would “prove detrimental to the public interest by degrading habitats.”

Mountain States Legal Foundation attorney David McDonald, who represents the camp owners, countered those concerns in a November letter, arguing: “Vague and generalized concerns that an undefined reduction of surface water flow may harm some limited subset of plants and animals, based on little more than the axiom that life requires water, are simply insufficient reason to deny the Church’s application.”

Sullivan also explained that his office had been unaware of Victor Fuentes’ plans to dismantle the FWS diversion this weekend until it was reported in the Pahrump Valley Times.

Micheline Fairbank, the deputy administrator of the Nevada Division of Water Resources, added that Fuentes has previously made similar threats about taking action to address what he sees as an unfair diversion of water.

“Mr. Fuentes has called our office previously and said … in an expression of frustration that ‘I’m just gonna go out and open it up myself,'” Fairbank said, but noted that he did not provide specifics.

The Nevada office is not, however, coordinating with the Fish and Wildlife Service, because any potential damage Fuentes could cause to the diversion would be outside of the agency’s jurisdiction, Fairbank said.

“That exceeds our authority. We only have jurisdiction over the administration and management of the actual physical waters, but not the activities that he’s talking about,” Fairbank said.

But she added: “If he were to do activities that then result in the impairment of Fish and Wildlife Service’s water rights or any other user’s water rights, then that’s where our jurisdiction is invoked to go ahead and investigate … and then to require corrective action to restore the delivery of those waters.”

Although water rights are often contentious in the West, Sullivan said the looming events at the Patch of Heaven are “relatively uncommon.”

“There’s generally an understanding of what the rules are around prior appropriation and deliveries of water,” Sullivan said.

In a letter to the couple yesterday, Fairbank noted that her department is investigating whether the Patch of Heaven is receiving its full 2.24 acre-feet of water under an existing right, but noted that the camp has previously been denied a request for the “entire flow of the Carson Slough.”

“If NDWR finds USFWS is preventing you from receiving your full duty of water, NDWR will take appropriate action to assure USFWS complies with Nevada’s laws,” Fairbank wrote.

She added: “Please be advised, however, that the same legal requirements apply to all persons. If actions are undertaken that impair USFWS’s, or any other water user’s, water rights, NDWR will be required to investigate the activities and require action be taken to remedy impairment to those rights.”

Should Fuentes follow through on his threat tomorrow, he could potentially put numerous endangered or threatened species at risk, according to the Center for Biological Diversity’s Great Basin Director Patrick Donnelly.

“You have to bear in mind that Ash Meadows is one of the most sensitive ecosystems in the United States,” Donnelly said, noting there are more than two dozen endemic species at the site, including three federally protected fish species and seven plants.

He noted that Fuentes’ actions would likely put him in violation of the Endangered Species Act.

“The last time this came up, the federal government stood down,” Donnelly said, referring to the Bureau of Land Management’s showdown with Nevada rancher Cliven Bundy.

BLM agents abandoned an attempted roundup of Bundy’s cattle near Bunkerville, Nev., which were to be auctioned to settle more than $1 million in unpaid grazing fees and trespass fines, in the face of anti-government activists.

Although Bundy and several of his sons would later be arrested and charged in the incident, the case ended in a mistrial (Greenwire, Aug. 7, 2020).

“Is the Fish and Wildlife Service and DOI going to take a different approach here, or are they going to let lawlessness reign supreme?” he asked. “When someone openly declares they’re going to break the law, that warrants a law enforcement response. It is our hope and expectation that the federal government sends out law enforcement to enforce the law.”

But Steve Ellis, who served as BLM deputy director of operations during former President Barack Obama’s second term, disagreed with the idea that Interior or its agencies should deploy personnel ahead of the potential incident.

“It just makes sense to defuse these situations when you can,” said Ellis, who retired in 2016. “I wouldn’t have my law enforcement people out there.”

Instead, Ellis said it would be less confrontational to document any damage and then arrest individuals at a later time, if necessary. “That would be a better route than confrontation,” he said.

Ellis likewise defended the decision to withdraw agents from the Bunkerville standoff in 2014.

Nye County Sheriff’s Captain David Boruchowitz said that local law enforcement officials do not have plans to be on site tomorrow.

“The Nye County Sheriff’s Office always stands ready to assist Nevada fish and wildlife officers if they request. However, we do not intend on having patrol staff assigned there unless called upon by someone,” Boruchowitz said.

But at least one local official could be on hand. County Commissioner Debra Strickland told the Pahrump Valley newspaper that she would like to see the couple reclaim the water they argue is legally theirs.

“I’d like to see what happens there. I’d like to be there to support you,” Strickland told Fuentes.