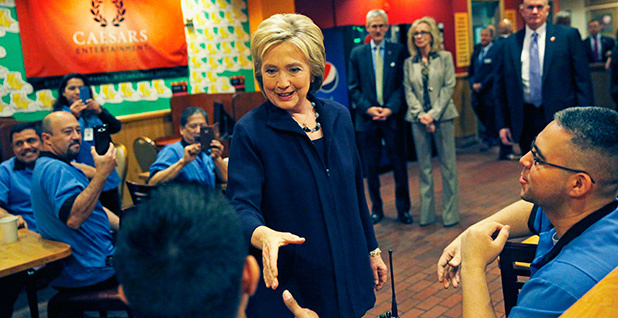 Former Secretary of State Hillary Clinton is running neck-and-neck with Vermont Sen. Bernie Sanders in Nevada ahead of Saturday’s Democratic caucus. Both are appealing to Latino voters, who pollsters say overwhelmingly believe in the science behind climate change and steps to address it. Photo by John Locher, courtesy of AP Images.

The Nevada Democratic caucus tomorrow could test the strength of the climate positions of presidential candidates Hillary Clinton and Bernie Sanders by featuring Latino voters, an electorate that’s more passionate than others about planetary warming.

The state hosts one of the largest Latino populations in the country, making tomorrow’s contest the first time in the nominating race that Clinton and Sanders will be competing in a landscape that’s not at least 93 percent white. Latinos accounted for 19 percent of Nevada voters in 2012.

Latinos disproportionately believe that humans are causing temperatures to rise and that it stands to harm them. No other demographic group comes close to the intensity of their beliefs, according to polls.

That could raise the profile of climate change as the Democratic candidates race through Nevada and into other states with diverse populations who appear sensitive to environmental issues related to health, trade and jobs, according to observers.

The changing characteristics of the race could also open new opportunities for Clinton and Sanders to differentiate themselves from each other on climate change. Both have described climbing temperatures as a key threat to the nation, leaving most voters with the perception that their policies are similar. That could change as the race travels through new territory, said Stephen Farnsworth, a political science professor at the University of Mary Washington.

"The climate change issue can be a very valuable line of attack for Bernie Sanders, and I’m surprised it hasn’t been emphasized more extensively by the campaign," he said, noting that the Vermont senator could build on his success with younger voters by targeting Latinos.

"Latino voters are not only younger than average, they are also more concerned about climate change," Farnsworth added. "Those two factors demonstrate why if Sanders pivots toward a more climate change-oriented conversation he’s likely to do well in Nevada."

The candidates will find a Latino population in Nevada that’s substantially more concerned about the impacts of global warming than the average voter. About 54 percent of Hispanics say that climate change is extremely or very important to them personally, compared to 37 percent of non-Hispanic whites, according to a national poll conducted last year by The New York Times and Stanford University.

Latinos also support strong government action to address greenhouse gases. That might make them hospitable to Clinton’s plan to expand renewable energy and Sanders’ proposal to enact a carbon tax. Sixty-three percent of Latinos say the government should do a great deal or a lot about global warming, according to the poll. That’s 14 percentage points higher than their white counterparts.

Farnsworth said Sanders could use his history of opposing international trade deals to tap into Hispanic concerns about jobs and environmental protection. Clinton could be susceptible to criticisms about her support for the Trans-Pacific Partnership, a trade deal she called the "gold standard" as secretary of State, Farnsworth said. Clinton changed her position to oppose the deal last year.

"One of the concerns about climate change is the extent to which international trade deals do not provide sufficient environmental protections," Farnsworth said. "Bernie Sanders has been vigorously opposed to major trade deals over the last 20 years. That’s one of the ways that he can distinguish Sanders politics from Clinton politics."

Environmental groups claimed that the trade deal, known as the TPP, could contribute to climate change by encouraging the use of coal, oil and natural gas in overseas markets. They also said it could allow corporations to sue governments for limiting trade through policies that seek to reduce greenhouse gases.

Latino attitudes on climate could play a bigger outcome in the general election, when either Clinton or Sanders could face a Republican nominee who questions the science behind warming. That stands to sway Hispanics, one of the fastest-growing voting groups in the nation, in critical swing states like Colorado and Florida.

Nevada serves as a symbol of the nation’s diversifying electorate. This year, there will be more nonwhite voters than at any time in U.S. history, driven largely by the maturation of Hispanic children born in the United States during the 1990s. They tend to be Democratic and believe in climate change.

Almost 1 in 3 people eligible to vote this year will belong to a minority race or ethnicity. While white voters still outnumber nonwhites 156 million people to 70 million, that gap is closing. Of the 10.7 million people newly eligible to vote since 2012, 7.5 million of them are Hispanic, black, Asian and other minorities, according to the Pew Research Center.

Still, not everyone is sure that voters can see a difference between Clinton and Sanders on climate issues. Both say it’s a dangerous problem, both promise to pursue aggressive action to tackle it, and both have pledged to safeguard President Obama’s Clean Power Plan.

"Both of these candidates are talking a good game on climate change," said Edward Maibach, director of George Mason University’s Center for Climate Change Communication. "That will go over very well with both Hispanic and African-American voters in Nevada. There’s very little skepticism about climate change in either of those two communities. I don’t know that this issue gives either one of them an edge."

He noted one opportunity for the campaigns to distinguish themselves: a local fight between the state’s Public Utilities Commission and the solar industry.

The PUC approved new rates in December for thousands of residents with solar panels who use net metering to sell their power to the grid. Solar proponents say it makes solar systems less affordable, and several large solar companies fired workers and left the state. The PUC says the new rates are meant to phase out public subsidies.

Both Sanders and Clinton are using the controversy to attract voters. Sanders recently met with solar workers who were laid off, and Clinton expressed support for federal legislation that would prohibit states from enacting retroactive price increases on solar users.

The move could have a disproportionate effect on Latinos. About 40 percent of solar installers in the state are Hispanic. That creates a personal connection between their livelihood and renewable energy initiatives meant to address climate change, said Brent Wilkes, national executive director of the League of United Latin American Citizens.

Candidates who aggressively pursue clean energy could benefit from the support of Latinos, he said.

"You’ll see that in their voting patterns," Wilkes said.