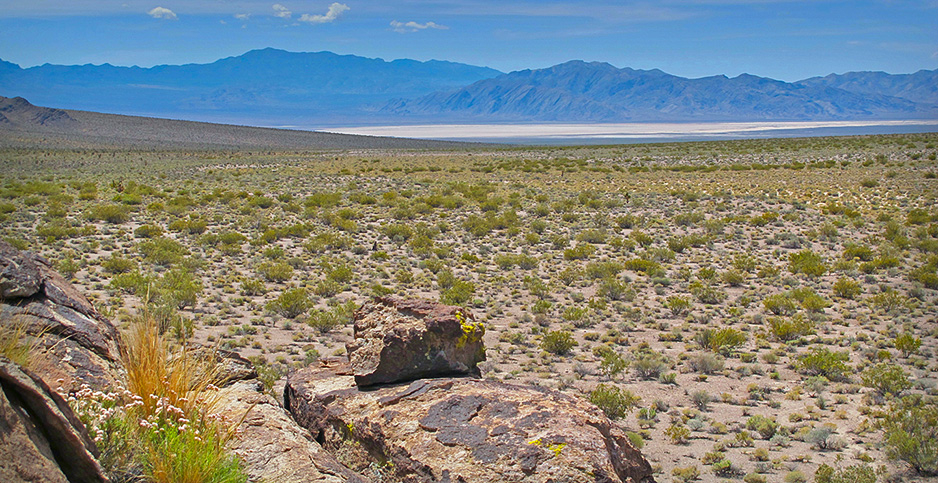 The Pentagon is pushing to expand the Nevada Test and Training Range into the Desert National Wildlife Refuge, shown here. Meghan Snow/Fish and Wildlife Service

As Nevada lawmakers push ahead with plans to expand key military training sites — including swapping out access to some public lands for expanded wilderness — the Silver State’s sole Republican sees another opportunity: opening up thousands of new acres for development near major population centers.

Amodei said he’d like to see plans for federal land exchanges outside Las Vegas — which could open up nearly 50,000 acres for development, while designating more than 298,000 acres in new Areas of Critical Environmental Concern — tied to a new proposal to modernize the Nevada Test and Training Range.

The 2.9 million-acre southern Nevada military site near Nellis Air Force Base is used for pilot training, but nearly all of its lands — roughly 2.1 million acres — are overseen by the Bureau of Land Management. The site uses portions of the adjacent Desert National Wildlife Refuge.

The new legislation, S. 3145, authored by Sen. Catherine Cortez Masto (D) and co-sponsored by the state’s full delegation, would extend the Air Force’s withdrawal of the refuge lands for 20 years, while also granting access to an additional 100,000 acres. The military’s current withdrawal is set to expire in 2021 (Greenwire, Dec. 20, 2019).

In a statement announcing the measure — which pushed back against the Air Force’s long-running effort to take control of the 1.6 million-acre refuge — Amodei said he hoped the bill could be a "springboard" for a measure known as the Clark County lands bill.

A draft of a proposal put forth by Clark County officials, titled the "Southern Nevada Economic Development and Conservation Act," has yet to be introduced in Congress.

The measure would update a 2002 law that allowed the state to acquire 170,000 acres for development in the Las Vegas metropolitan area.

Amodei told E&E News he would like to see the Clark County proposal paired with the NTTR proposal. Similarly, an as-yet-unveiled pitch for the Reno area, known as the "Truckee Meadows Public Land Management Act," could be tied to updates for Naval Air Station Fallon and Fallon Range Training Complex.

"Nobody sneaks anything in around here," Amodei said, noting that the Nevada delegation has discussed both regions. The measures would also need to be reviewed by the House Natural Resources and Senate Energy and Natural Resources panels, he added.

If the two lands bills are separated from the bills addressing updates to the military bases, "then it’s back to the regular old lands bill, salt mine grind," he added.

Environmental activists, however, said they will urge lawmakers to reject a marriage of the military and development bills.

Center for Biological Diversity Nevada State Director Patrick Donnelly told E&E News that Cortez Masto vowed not to link the Clark County proposal with the Air Force bill at an October meeting in Nevada, but he said there is no audio or video of the exchange.

A spokeswoman for Cortez Masto said the senator is "committed to getting these critical pieces of legislation passed through the Senate, and she is looking at all the potential avenues to do so."

But Donnelly has urged the Nevada delegation to cast a critical eye on the county’s proposed legislation, saying it could subvert federal laws including the Endangered Species Act and the National Environmental Policy Act by bypassing required scientific and environmental reviews.

"We are encouraging you and the rest of Nevada’s congressional delegation to take a step back from the County’s proposal, and work with stakeholders to come up with a compelling vision for the future of southern Nevada," Donnelly wrote in a letter to Cortez Masto last summer. "Las Vegas should employ smart planning principles for new development within the existing [Southern Nevada Public Lands Management Act] growth boundary, and any lands bill should prioritize sustainable growth and in-fill development."

Shaaron Netherton, executive director of Friends of Nevada Wilderness, likewise pointed to concerns about circumventing the Endangered Species Act as well as how new development could increase demands on water in the arid region.

"When you have a short deadline, my fear is when people hurry, they sometimes make mistakes," Netherton told E&E News, arguing against a rush to enact a new land use measure.

"A bill that is going to affect 50 years of development of the Las Vegas valley is something that has to be gotten right," she added.