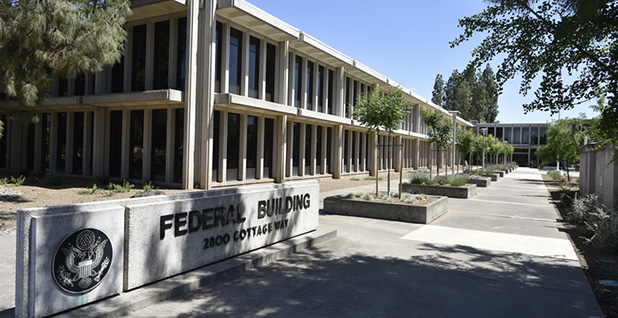 The California state office of the Bureau of Land Management. BLM

The Bureau of Land Management has chosen a career employee with nearly two decades of experience at the bureau to serve as acting director of the BLM California state office that oversees more than 15 million acres of federal land.

Joe Stout, who since early 2015 had served as associate state director, replaces Jerry Perez, who left last week to become supervisor of the 700,000-acre Angeles National Forest — one of the country’s most-visited national forests, less than an hour’s drive north of the Los Angeles metropolitan area.

It’s not his first time serving as acting director in California, where BLM owns roughly 15 percent of the state’s total land area.

Stout filled in last year when Perez served a brief stint as BLM’s acting deputy director of operations in Washington, D.C., during the first six months of the Trump administration.

"He would have been my pick as acting state director," said one former senior BLM official who knows Stout well.

Stout is "top notch," the source said, and "career employees all like Joe."

The source added, "He and Perez were a strong team."

Martha Maciel, a BLM spokeswoman in California, confirmed late yesterday that Stout is now acting director. The bureau did not publicly announce a replacement for Perez until after his last day at the bureau Friday.

Perez, who is replacing Jeffrey Vail as supervisor at Angeles National Forest, is expected to start there later this week, a source said.

Stout’s move to acting California director is part of a series of senior leadership changes at BLM over the past few months.

BLM in June moved Mike Nedd, at the time BLM’s acting deputy director of operations, back to assistant director of energy, minerals and realty management — a position he held prior to Interior Secretary Ryan Zinke naming him acting BLM director in March 2017 (Greenwire, June 11).

Richard Cardinale, the Interior Department’s director of the business operations division in the Office of the Chief Information Officer, was then moved into BLM’s deputy director of operations position to replace Nedd on an acting basis.

All this has occurred as Interior works to finalize a plan to move BLM’s national headquarters from Washington to a location out West, where the vast majority of federally managed lands are located.

Stout has held a number of senior administrative positions since joining BLM in 2001, according to an announcement of Stout’s promotion that included a brief biography on the bureau’s California website.

Prior to his stint as associate state director, Stout served as division chief for the Decision Support, Planning and NEPA program in Washington. He also served as a legislative affairs specialist at the national office.

While working as the division chief for the Decision Support, Planning and NEPA program, Stout was involved in developing the Obama era’s proposed Planning 2.0 rule, according to bureau records.

Planning 2.0 would have revised for the first time in three decades BLM’s land-use planning process for managing the agency’s 245 million acres.

Stout has a master’s degree in public administration, with an emphasis in environmental policy, management and law, from the University of Colorado in Denver, according to the biography.

The biography says that Stout’s "undergraduate studies" were in sociology and environmental studies from the State University of New York at Fredonia.

Stout and his family enjoy the outdoors and traveling, the biography says.

"Since moving to California, they have begun exploring the public lands, including hiking on the Lost Coast Trail and visiting Yosemite and the Redwoods," it reads.