New at FERC? Ex-commissioners are here to help 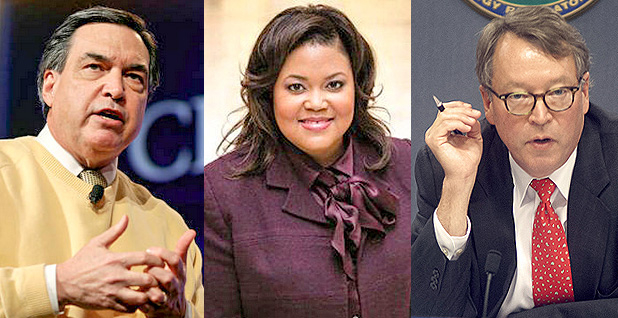 As the Federal Energy Regulatory Commission gets back to business this month, previous appointees are full of advice for their successors.

It’s a relatively small group that routinely is in communication with incoming commissioners in times of a turnover in FERC leadership.

And that counsel may never be more welcome, as reportedly more than 500 orders are stacked up at FERC awaiting action.

In normal times, "you’re drinking from a fire hose," said Marc Spitzer, a Republican who served for more than four years beginning in July 2006.

That same analogy was drawn by Colette Honorable, a Democrat who served from January 2015 until the end of June. "It can be overwhelming, a whirlwind," she said.

The Senate on Aug. 3 unanimously confirmed Robert Powelson and Neil Chatterjee as new FERC members, restoring a quorum at the agency that has been without one since Feb. 3.

As energy adviser to Senate Majority Leader Mitch McConnell (R-Ky.), Chatterjee was his liaison to the Senate Energy and Natural Resources Committee. Prior to working on Capitol Hill, Chatterjee worked in government affairs at the National Rural Electric Cooperative Association.

Powelson and Chatterjee, both Republicans, will join acting FERC Chairwoman Cheryl LaFleur, a Democrat, and start working through the orders that have been piling up at the agency.

Job begins with an ‘ancient type of procedure’

Once the Senate votes to confirm a FERC commissioner, there is one more step before he or she can take the oath of office.

It "goes back to the very founding days of our nation," said Phil Moeller, now executive vice president at the Edison Electric Institute. He served at FERC more than eight years beginning in summer 2006.

Moeller gestured as he described the dimension of a large parchment that was central to the "ancient type of procedure" whereby both the secretary of State and the president have to personally sign the so-called commission.

When Moeller was confirmed by the Senate, President George W. Bush was already at his ranch in Texas on vacation, so after the secretary of State signed it, the parchment had to be flown to Texas for Bush’s signature. "I think they flew it back on Air Force One," Moeller said, enabling him to be sworn in by Supreme Court Chief Justice John Roberts.

He recalls staying to "vote on something two hours after I was sworn in."

Spitzer also recounts being pressed into service earlier than planned.

He was confirmed by the Senate on July 14, 2006, and was set to be sworn in on the 24th. But on the morning of Friday the 21st, sitting Commissioner Nora Brownell resigned, and Spitzer was called into action.

"There was a tremendous heat wave in the West," he said. The California Independent System Operator needed FERC to approve emergency orders, and FERC Chairman Joseph Kelliher did not want to wait days.

So Spitzer, who was still in Arizona as a member of the Corporation Commission there, had a justice of the peace come over and swear him into FERC at 7 on Friday night. Meanwhile, in D.C., where it was 10 p.m., FERC staff were working on paperwork to get him signed up for health insurance and make sure there was no gap in his coverage as he resigned from the Arizona commission.

"There was a party going on in my house, and I was downstairs on the phone with FERC staff voting on notational orders that the California ISO needed. They walked me through how to do that," Spitzer said.

The former commissioners were uniform in the praise of FERC staff.

Honorable cited the number of "long-tenured staff members in all aspects of the agency," describing them as "uber professional" and "nimble."

That may be why commissioners typically reach into the ranks of career FERC personnel to fill out much of their five-person staffs.

"You have to be very focused on standing up your new team," she said.

"It’s important to have people who really understand and know how the agency runs: how filings get through the pipeline and to the commissioners’ offices in the form of an order and understanding the touch points all along the way on policy," Honorable said.

Democrat Jon Wellinghoff, who also joined the agency in July 2006 and served more than seven years, including as chairman, said his experienced staff was key.

"Ultimately, by hiring those kind of people, it gives you a huge leg up, because you have people who have dozens of years of experience and help guide you through the process," he said.

Historically, commissioners hire three advisers, an executive assistant and a confidential assistant who does scheduling and other advisory work. The advisers typically are attorneys or economists, Moeller said.

"Before I was appointed, I was asking former commissioners how they divided their staffs," Moeller said.

After consideration, Moeller divided the three along the lines of the FERC Office of Energy Market Regulation — east, central and west — so that each could develop expertise in the four fuels FERC deals with: electricity, natural gas, oil and hydropower.

"They are key people because they have to work very, very hard" and there is an "enormous amount of reading for them to do," he said.

"New commissioners have gotten in touch," Moeller said. "I’m allowed to talk to them until they’re sworn in," he explained, as he is still in a two-year "blackout period" from when he departed FERC.

"And that’s the advice I’ve given them [on staffing]. I’m legally allowed to give strategic advice and coach them on these kind of things. I went through it; I’d rather save them some time than have them trying to figure it out on their own. They can take my advice or not," he said.

Brownell, a Republican who joined the commission in June 2001 and served five years, said the agency has "traditionally been totally nonpartisan, so whenever anybody new comes on board, [former commissioners] reach out, asking, ‘Tell us what we can do to help, what would you like to know?’"

It can take months to be on top of the job

A new commissioner’s first day on the job "is just like any other new FERC staffer," said FERC spokeswoman Mary O’Driscoll.

"The only distinguishing orientation feature for FERC commissioners is that they also get an introduction to and an orientation about the pending caseload, the notational voting process and how the commission’s monthly procedures schedule operates," O’Driscoll said.

"FERC is enormous in terms of its scope, the work that you do. There’s a period of adjustment from whatever background you have," Spitzer said.

"In this work, you learn something new practically every day. If you think you know it all, you’ve already started at a deficiency," Honorable said.

Speaking of those who lobby FERC, "I would caution people not to bombard the commissioners," she said. "Let them get their feet on the ground and get their head around the work that they will carry out at a furious pace going forward," she said.

"There’s a blizzard of paper coming at you on proposed orders out of the different FERC offices," Wellinghoff said. "We did several hundred orders a year. It’s a tremendous amount of work. Part of it is prioritizing those, understanding which ones are more of a routine nature, and which ones have special issues that need to be addressed."

According to Wellinghoff, the biggest challenge for him, beyond prioritizing orders as they came in, was figuring out his own personal agenda and how to move it forward.

Dealing with the orders out of the offices "initially subsumes a great deal of your time, because you’re trying to learn about the nuances of the agency, the regions, the [markets]," Wellinghoff said. At the start, he estimates he spent 80 percent of his time trying to understand orders he was voting on.

Like Powelson, Brownell came to FERC as a former member of the Pennsylvania PUC and president of NARUC.

It’s critical for new commissioners "to understand the structure of the FERC, how it works, what the administrative law rules are," Brownell said, which is why she began meeting with FERC staff even before her confirmation by the full Senate.

"It was a blur — I think to really be comfortable, it probably took about six months to feel like ‘OK, I get it,’" she said.

Like his fellow ex-commissioners, Moeller said it took him several months to learn about the areas where he did bring expertise, such as the New York and New England markets, and to a lesser extent the PJM Interconnection and gas pipeline issues.

What he realized early on was how as a quasi-judicial body, it was important to be "very, very cognizant of the ex parte line on pending matters. That was something that was new to me. Being very careful about that is important because you don’t want to be recused from a matter if you can help it. You don’t want to say something publicly that then [prompts] a motion to have you recused from the deliberations because that vote could make a big difference," Moeller said.

Complicating matters were open meeting rules that prevent more than two commissioners from meeting at the same time without public notice, which meant that staff spent a lot of time "negotiating on behalf of their commissioner" on how orders were shaped.

"Probably not well appreciated or understood outside of the building is that the orders are a negotiation. You give and take," he said.

So it encourages a back-and-forth "where the commission speaks with one voice and speaks best through its orders," he said.

"Each order is important to somebody," Moeller said of the more than 500 pending.

"Prioritization is going to be a big challenge. Some have more of an impact on the economy, particularly if you miss a construction season. That can be mighty expensive," he said.

One of the best pieces of advice he received — and would offer again — Moeller said, was from a former FERC office director about the operations of the commission: "Make sure you keep those communications channels really wide open, because if you don’t, it can become a little bit of a vipers’ nest."