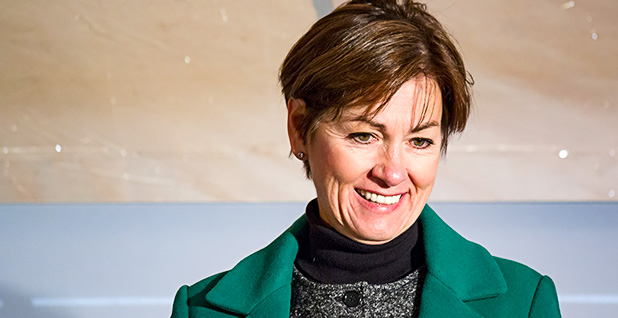 Nevada Gov. Brian Sandoval is fresh off a legislative session in which he signed nine bills aimed at supporting the clean energy sector. In Florida, Gov. Rick Scott recently signed a tax exemption that solar installers say is essential to jump-starting the residential and commercial market in the Sunshine State. And in Iowa, where wind now accounts for 36 percent of the state’s electricity generation, newly installed Gov. Kim Reynolds recently finished an energy plan that calls for growing the wind, biofuels and solar industries.

The growing embrace of renewables by Republican governors stands in stark contrast to the president. Trump’s budget request for fiscal 2018 includes a 70 percent reduction to the Department of Energy’s Office of Energy Efficiency and Renewable Energy (E&E Daily, June 22). Energy Secretary Rick Perry, who has expressed concern about coal’s decline and renewables’ rise, has embarked on a grid reliability study. And in speeches across the country, Trump has railed against renewables while promising to revive the coal sector.

"We’ve ended the war on clean, beautiful coal, and we’re putting our miners back to work," the president said during a campaign-style speech in Cedar Rapids, Iowa.

"I don’t want to just hope the wind blows to light up your homes and your factories," he said.

The state’s wind industry has helped attract Facebook, Microsoft and Google data centers to Iowa, said Brenna Smith, a spokeswoman for the governor.

Asked about Trump’s comments, she responded, "We will continue working with federal officials to ensure the renewable fuels industry remains strong in Iowa."

Sandoval signed bills this year to restore net metering for residential solar owners, bolster energy storage and include the cost of carbon in utilities’ long-term plans.

"We’re going to solidify Nevada’s position as a national leader in clean and renewable energy," Sandoval said during a recent bill-signing ceremony at a Tesla warehouse in Las Vegas.

Economic benefits … and the environment

"Increasingly, those concerns about affordability and reliability are being addressed. There are stronger arguments," said Maryland Secretary of Environment Ben Grumbles, who serves under Gov. Larry Hogan (R). "Providing energy is about environmental stewardship and clean energy, but also making sure it’s affordable, reliable and sustainable."

Reynolds didn’t mention climate change in her inaugural address. Sandoval didn’t raise the subject at the bill signing. Instead, the Nevada governor talked up the economic benefits of renewables, saying the bills signed this year would boost jobs and save consumers money (Climatewire, June 16).

That dynamic was on display in Illinois last year, when Gov. Bruce Rauner (R) signed a massive energy bill. The Environmental Defense Fund expects the law to slash the state’s carbon emissions 50 percent by 2030, by encouraging a combination of renewable development and energy efficiency.

Howard Learner, executive director of the Environmental Law and Policy Center in Chicago, added, "If we all agree clean energy development is good for economic development and the environment, we don’t all have to agree on climate."

In Maryland, Hogan has signed a bill to cut the state’s carbon emissions 40 percent by 2030, and his administration recently approved renewable energy credits for 368 megawatts of offshore wind.

Often, Republican positions are more muddled. In North Carolina, where the GOP holds supermajorities in both chambers of the Legislature, lawmakers are considering a solar bill that would open the door to residential and commercial installers. But it would shift decisionmaking about the state’s utility-scale installations from solar developers to utilities.

Still, many GOP lawmakers worry about the cost of the solar boom, he said. Much of the development is attributable to a long-standing federal law that requires utilities to accept power from small-scale renewable developments. Szoka’s bill would change how North Carolina implements the law’s standards, requiring solar developers to submit competitive bids to the state’s utilities.

"I feel Republicans are supportive of the solar industry if — and it’s a big if — if the general ratepayers don’t have to pay the cost," Szoka said.

The bill’s ultimate impact may depend on how it’s implemented by state regulators, who will be tasked with studying net metering, said Stephen Kalland, executive director of the North Carolina Clean Energy Technology Center.

"The good in this bill outweighs the bad, but not as much as I’d like," he said.

Environmentalists widely criticized Sandoval’s decision to veto a bill to boost Nevada’s renewable portfolio standard to 40 percent by 2030 (Climatewire, June 20). Baker has frustrated greens in Massachusetts, who say the governor is doing the bare minimum to meet the commonwealth’s climate objectives (Climatewire, Dec. 21, 2016).

Many Republicans still ask questions about cost and reliability, said Grinstead, who served as South Carolina Sen. Lindsey Graham’s (R) political director during his 2014 re-election campaign. But as development increases and costs fall, Republican governors increasingly want to see their states benefit from the jobs and cost savings created by the industry, he said.

"It’s becoming much less partisan than it used to be," Grinstead said.