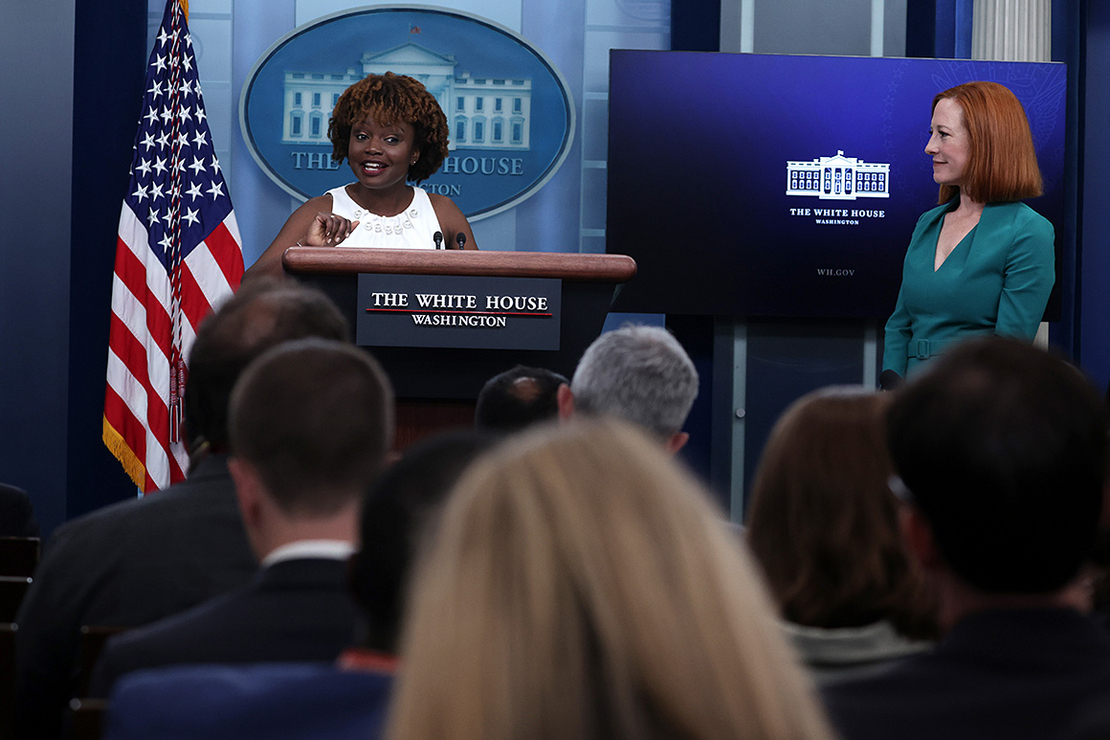 Before she was poised to become White House press secretary, Karine Jean-Pierre was an environmentalist on a mission to save tiny shorebirds.

“My environmental work started by complete chance,” Jean-Pierre wrote in her 2019 memoir, “Moving Forward: A Story of Hope, Hard Work, and the Promise of America.” She was a 19-year-old college student when she got a summer gig as a phone canvasser for a group called Citizens Campaign for the Environment on Long Island.

Her boss hired her for a side project to monitor piping plovers, long-legged shorebirds that nest near the water’s edge. She wore an Australian slouch hat with a big Tweety bird decal as she peered into nests. The retirees who drove their recreational vehicles to the beach parking lot started to recognize her.

“‘Here she comes, the boid gal!’ they would cry out in that unforgettably nasal, consonant-dropping Long Island accent,” Jean-Pierre wrote. “How them plovers doin’?”

Decades later, she’s about to be recognized by a lot more people.

Jean-Pierre, 44, will become Biden’s press secretary and top spokesperson when Jen Psaki exits, the White House announced yesterday. She’ll be the first Black person and the first openly gay person to hold the title. Her partner is CNN national correspondent Suzanne Malveaux; they have a daughter.

From the podium in the White House briefing room, Jean-Pierre will deliver Biden’s talking points and get peppered with reporters’ questions on just about every topic, undoubtedly including climate change and environmental issues.

They’re topics she cares deeply about, according to her book.

The summer after she graduated from college, Jean-Pierre worked as a counselor for Girls Action G.R.E.E.N., which aimed to expose girls in underserved Long Island communities to the outdoors. That job “awakened me to the concept of ‘environmental justice,’” she wrote. “Underserved communities suffer from polluted air, water, and ground because of chemical contamination.”

For another part-time job with the Theodore Roosevelt Sanctuary and Audubon Center, she hauled animals including a 7-foot snake and a red-tailed hawk around in a van to give presentations to classrooms. She still has a scar from a turkey vulture ripping through the leather sleeve on her arm, she wrote.

She went on to study public administration at Columbia University and launched a career in activism and Democratic politics.

Jean-Pierre has worked for the American Civil Liberties Union, MoveOn.org, and the presidential campaigns of Democrats John Edwards, Martin O’Malley and Barack Obama. She served in the Obama White House before joining the Biden administration as principal deputy press secretary.

An introvert takes the podium

Despite her many high-profile jobs, Jean-Pierre describes herself as an introvert who has a tough time constantly being “on.”

Her shyness dogged her as an adult, she wrote, including during meetings in the Obama White House when she was regional political director: “I was always so nervous talking in front of a group of people that I would stumble during my what’s-going-on-in-the-Northeast update.”

She found television to be less intimidating than speaking to a group of people. “It was like a one-on-one conversation. Except the camera couldn’t answer back!”

Jean-Pierre will undoubtedly bring a different style to the podium than Psaki, who’s known for sparring with reporters when she objects to their questions.

But Jean-Pierre can hold her own.

At a 2019 discussion featuring her and then-California Sen. Kamala Harris, a male protester jumped on stage and grabbed the microphone from Harris’ hand. Jean-Pierre jumped up to confront the protester, thrusting herself between him and the senator. Later, during the presidential campaign in 2020, Harris hired Jean-Pierre to be her chief of staff.

The incoming press secretary is assuming the job during a midterm election year when political polarization in Washington stands to intensify even further.

She detailed her frustrations with Republicans in her book, which was written before she joined the Biden administration.

“I believe the Republican Party opposes economic equality and social justice,” she wrote. “I think it is becoming a negative force in our society, and has caused far more problems than it has solved.”

Made up “increasingly of older white men,” the GOP “represents the interests of the very rich in America — people like the billionaire Koch brothers,” she wrote. “It is also a party of climate change deniers and white nationalists.”

Jean-Pierre will replace Psaki when she departs on May 13, Biden announced. Psaki was reportedly in talks to join MSNBC after she leaves the White House.

“Jen Psaki has set the standard for returning decency, respect and decorum to the White House Briefing Room,” Biden said in a statement. He said he and first lady Jill Biden “have known and respected Karine a long time and she will be a strong voice speaking for me and this administration.”

Biden confidant Anita Dunn has also returned to the White House from her political consulting firm, Biden said. She will work on White House policy and communications as the president’s senior adviser.