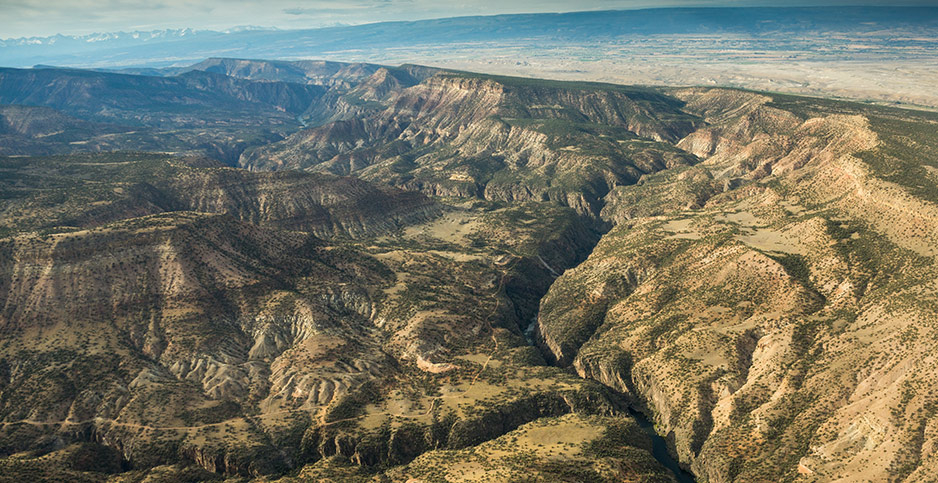 The confluence of the Gunnison and North Fork Gunnison rivers carves out the region where some locals are fighting for an early say in oil and gas extraction plans for their community. Bruce Gordon/Ecoflight

PAONIA, Colo. — Soaring in a turboprop aircraft over the tidy green patchwork of the North Fork Valley, Pete Kolbenschlag gestures toward a dirt-brown interruption in the landscape.

It’s an oil and gas site, and as the eight-passenger plane glides over the valley, a few more come into view. A coal operation protrudes from the highway that cuts through the blue-green hills.

Locals describe the region in layers. Low-lying lands are privately held. The Forest Service, a unit of the Department of Agriculture, controls the peaks. The Interior Department’s Bureau of Land Management owns the tracts that serve as the corridor between the two.

"We need to have a planning process that looks at the landscape as a whole," Kolbenschlag said.

This isn’t Kolbenschlag’s first aerial tour of the valley he calls home. His public outreach and community action group, Mountain West Strategies, is a chief proponent of the North Fork Alternative Plan, a proposal to close off 75 percent of the area’s federal lands to energy leasing.

"We’ve always been an energy economy," Kolbenschlag said. "We’re not talking about this radical departure from our past, a rebuke for the industries that were powering America for all these years. We’re talking about how we’re going to power it in the future."

Kolbenschlag and his cohorts — a group that includes organic farmers, outdoor recreationists and solar advocates — see a mix of coal mine methane, micro-hydropower and solar power in the future. But first, they say, the spread of oil and gas needs to be contained.

Although each North Fork Valley oil and gas site appears to have a small footprint, Kolbenschlag said the effect on nearby land and water is bigger. He likens it to a spiderweb stretching across a hiking trail: Balled up, it’s the size of a marble. But when the web is stretched, it’s a far-reaching snare.

Who gets a say?

The North Fork plan, which BLM’s Uncompahgre Field Office in western Colorado is considering as part of its latest resource management plan (RMP), is hotly contested by fossil fuel developers. They say oil and gas industry opponents have little basis to put the North Fork Valley off-limits to producers because so much of the land is already spoken for.

Across the state, there are 6,513 producing federal oil and gas wells and 2,253 producing federal leases, according to data from BLM Colorado. In fiscal 2015, leases managed by BLM’s Colorado office contributed $5.4 billion to the economy and 23,522 jobs — most of which were generated by the oil and gas industry. The remainder of those revenues and jobs were produced by timber, coal, recreation, non-energy minerals and grazing activities.

Today, the Uncompahgre Field Office is working off a couple of federal resource management plans developed during the 1980s. An update has been in progress since 2010 and, when it’s finalized, would set the foundation for public land use over the next 20 years.

BLM is weighing four alternatives: One would continue the 1985 San Juan/San Miguel RMP and 1989 Uncompahgre Basin RMP; a second would facilitate ecological improvements; and a third option would emphasize maximizing land uses like energy development and livestock grazing while mitigating land impacts. A fourth option aims to strike a balance between land uses that carry economic and environmental value.

The North Fork plan fits under the second alternative, which prioritizes ecology.

An approved RMP and a signed record of decision are expected in spring 2019.

In the next year, the field office will put forth a proposal for governing resource development in the region. The development of a new RMP pre-dated an Obama-era rule known as Planning 2.0 that would have prioritized early community involvement and a "landscape-level" approach to planning.

Shortly after President Trump took office, the Republican Congress repealed the Planning 2.0 rule under the Congressional Review Act, at the urging of critics who believed that increased public participation in planning tipped land management decisions away from extractive industries (Energywire, March 8).

BLM never had the opportunity to implement the rule. Still, the North Fork plan is putting some of 2.0’s principles to the test.

"A lot of those concepts were already happening here," said Uncompahgre Field Office Manager Greg Larson. "We do a lot of consultation with our communities and our cooperating agencies."

In other words — with or without Planning 2.0 — Larson says BLM’s process is gathering enough public input to incorporate into a planning document. "Like anything in the BLM, there’s conflicting opinions, and our job is to do that coordination and consultation and meet that multiple-use mission."

At the time, the oil and gas industry celebrated the rule’s repeal.

"The final rule allowed for all planning documents to be changed at any moment, which does not allow for a set understanding of expectations and long-term planning," Dan Naatz, senior vice president of government relations for the Independent Petroleum Association of America, said after Congress voted to scrap Planning 2.0.

Proponents of the rule said its absence actually introduces more uncertainty because groups that felt closed out of the process are more likely to go to court.

For Eric Sanford, operations and land manager of drilling company SG Interests in Colorado, Planning 2.0 did little to demolish those roadblocks.

"Although the rule might have been well-intentioned, all it’s used for is a delay mechanism for those that oppose oil and gas development," he said.

The opposition’s goal is to delay, delay, delay, he said. The form of the delay varies — Planning 2.0, National Environmental Policy Act reviews, litigation or administrative challenges — but the outcome is always the same, he said.

"Any delay is a victory for the opposition, and we factor that into our development," Sanford said. "It’s part of the equation. We move forward knowing that."

NIMBY — but where, then?

There aren’t a lot of places to plant a pad in the North Fork Valley — and that’s the way it should be, Sanford said.

But at the end of the day, the wells have to go somewhere, he said. And the placement is never going to please everyone.

SG Interests has taken Kolbenschlag and other local activists to task for their advocacy of the North Fork plan. Much of the acreage that the plan would protect is already held, but green groups will take any number of actions to stop oil and gas production, Sanford said.

Those attacks are tantamount to pushing for new law, Sanford said. Such was the case nearby in the Thompson Divide, where the Interior Department under President Obama canceled more than 40 already-issued oil and gas leases (E&E News PM, Nov. 17, 2016).

SG Interests has filed a lawsuit asking for those leases back.

A former trial attorney, Sanford said he thrives on going head-to-head with energy industry detractors. As a former member of BLM’s Southwest Resource Advisory Council, he was able to build some personal relationships with local environmentalists, but the public-facing debates are often contentious: SG Interests is currently pursuing a libel lawsuit against Kolbenschlag.

"People think there’s a nefarious plan that we have that we are refusing to share with the world," Sanford said. "The changes in our project that have occurred over time are really the result of the planning process being unpredictable and the economics of gas prices or the services we use."

Proposals to severely inhibit production, like the North Fork plan, add to that unpredictability, he added.

"Opposition groups attack RMPs for being stale. Then they take 15 to 20 years to do an RMP," Sanford said. "By the time it’s done, the opposition groups litigate over the fact that it’s stale. Yet they’ve delayed the process by requiring new public input processes that delay the process.

"It’s a maddening circle that achieves their end to delay projects, but it doesn’t benefit the public lands," he said. "It doesn’t help our industry have any consistency."

If BLM hits its spring 2019 deadline for the Uncompahgre RMP, the plan will have taken just over nine years to develop.

Consideration of the North Fork Alternative Plan has added some time to the schedule, according to BLM. But it’s unlikely to notably lengthen the RMP’s timeline, said Larson of the Uncompahgre Field Office.

"These processes take quite a while," Larson said.