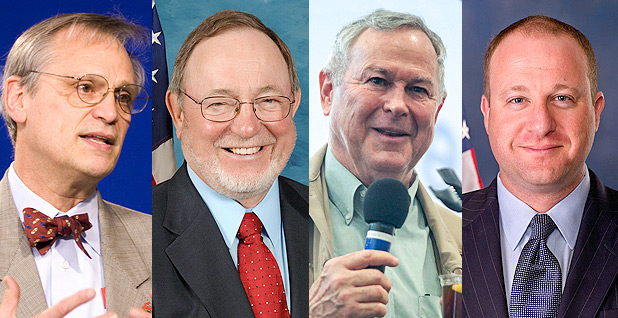 It’s a little too easy to call the newest coalition on Capitol Hill a joint effort — but it’s an apt description for the Cannabis Caucus.

A bipartisan quartet of House lawmakers unveiled the working group yesterday, which they said will work to align federal laws with the multitude of states that have legalized either medicinal or recreational marijuana usage, or a combination of both.

"People are suffering, the law is wrong, we have a bipartisan caucus, we’re going to change the situation," said California Rep. Dana Rohrabacher (R), who was joined at a news conference by the caucus co-founders, Reps. Jared Polis (D-Colo.), Earl Blumenauer (D-Ore.) and Don Young (R-Alaska).

According to Blumenauer, following the 2016 elections — which saw eight states approve ballot measures related to marijuana use — 95 percent of all Americans now live in areas where some form of drug use is legal.

"We saw this wave crest this November," Blumenauer said of the decision to create a formal Cannabis Caucus with fellow lawmakers. Oregon is among the states that have legalized both recreational and medicinal cannabis.

Along with his co-founders, Blumenauer criticized conflicts between federal and state laws.

While many states have approved use of marijuana — like Colorado, where taxes on the drug go in part to fund the public school system — the drug remains illegal under federal law.

The Controlled Substances Act categorizes marijuana as a "Schedule I" substance, or one without an acknowledged medical use. Other drugs in the category include cocaine.

Such prohibitions keep retail marijuana businesses from being able to use federally insured banks, relegating them to an all-cash business model. Blumenauer also pointed to conflicts for military veterans who wish to use medical marijuana and tax laws that put legal drug businesses at a disadvantage.

"I’ve been working in this for years, I’ve never meet a single person who thinks any policy objectives have been advanced by making this an all-cash business," Blumenauer said.

Young emphasized that his support for the caucus stems from his belief in states’ rights.

The push to enshrine federal protections for legalized drug use comes as Attorney General Jeff Sessions takes over the Trump administration’s Department of Justice.

During the Obama administration, marijuana growers and retailers in states that had approved recreational use operated under a 2013 memorandum that ensured federal agents would not target individuals in possession of "small amounts of marijuana for personal use on private property."

But Sessions has criticized state-level legalization, suggesting at a hearing in early 2016 that such efforts would lead to a rise in the use of illicit drugs like heroin and cocaine.

"We need grown-ups in charge in Washington to say marijuana is not the kind of thing that ought to be legalized. It ought not to be minimized. It is in fact a very real danger," Sessions said at the time. He added that state legalization also complicated the anti-drug message that "good people don’t smoke marijuana."

Still, Polis pointed to President Trump’s comments during the 2016 White House race that he would defer to states with regard to medical or recreational marijuana and said he believed Sessions should follow that direction rather than strike out with his own agenda.

"We’re hoping given that now [Sessions] works for the president, he’ll maintain those policy commitments that were made during the campaign," Polis said.

He later added: "We don’t want to be in a place where we rely on the goodwill of which side of the bed any attorney general wakes up on on any given day. That’s why we’re pursuing statutory changes."

Young acknowledged the quartet of lawmakers is an "unusual" grouping, pointing to a disagreement he and Polis had on the House floor earlier this week as the chamber debated the repeal of an Obama-era regulation that gave the federal government control over predatory animal populations on national wildlife refuges in Alaska.

During the debate, Polis called the measure, which Young authored, a "puppy-killing act" (E&E Daily, Feb. 15).

"We can disagree on other things, but it’s good to work on something we believe is good for the country and good for the states," Young said.

The lawmakers did strike harmony on one question during their news conference: Asked whether any of the House members utilizes marijuana, none admitted to lighting up.

"I’ve never used marijuana, never inhaled either," Young said, in an apparent reference to President Clinton’s famous answer when asked about drug use. Polis similarly said he does not use the drug.

Blumenauer said he does not currently use marijuana but could do so in the future: "It would be hypocritical to try and change the law and be a user. … I’m personally going to wait until it’s legal."

Rohrabacher was the only member of the quartet to acknowledge using some form of cannabis, noting that he has used a cannabis-infused candle ahead of recent surgery to fix arthritis in his arm.

"When we’re discussing people’s motives, we can be legalistic … but we need to touch people’s hearts as well as their heads," he said.