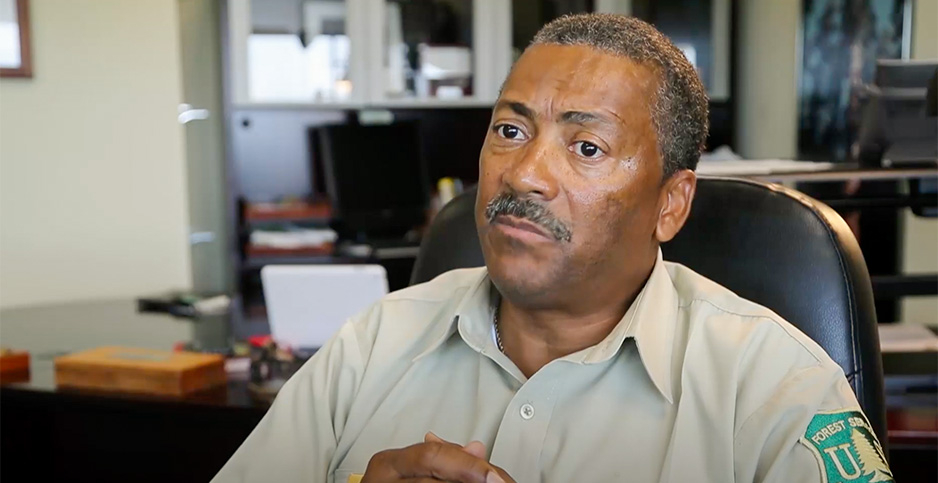 Wildfire season will be ramping up when Randy Moore starts as chief of the Forest Service later this month — and he has the right resume to step into that deepening crisis, groups that follow forest policy say.

Moore, a career Forest Service employee who’s been the regional forester for the Pacific Southwest since 2007, brings experience in managing California’s 20 national forests for wildfire — a natural cycle that’s grown out of hand in many areas thanks to climate change and vegetation that’s built up because of years of strict fire suppression.

“Randy Moore will bring a wealth of Forest Service experience to his taking over the position of chief of the Forest Service,” said Steve Brink, vice president of public resources at the California Forestry Association, which represents the forest products industry, in an email to E&E News.

“Particularly the last 14 years with his service in his regional forester position in California, he has seen the impact of wildfire, insects and disease,” Brink said, adding that Moore has moved quickly to use programs such as “good neighbor authority,” in which the agency works with nonfederal partners on forest thinning and related projects in fire-prone areas.

Supporters said Moore’s experience in California could prove especially helpful as the Forest Service grapples with what’s unfolding into another above-average fire season and with pressure to boost pay for wildland firefighters. The National Wildlife Federation said he will be a “strong steward of our forests.”

As Moore prepares to take over, wildfires are ahead of last year’s pace. The National Interagency Fire Center said wildfires have burned nearly 2 million acres so far this year, compared with just shy of 1.7 million acres during the same period last year — although still less than the 10-year average for the period.

Moore has emphasized wildfire response — and higher pay for firefighters in an effort to retain them — recently as regional forester, including in an address posted on YouTube by Grassroots Wildland Firefighters, a group pressing that cause.

“We know hiring has been an issue,” Moore said in the video posted May 3, adding that other fire-related agencies pay more than the federal government does. “As states, counties and other entities hire more firefighters or firefighter-type positions, the Forest Service has been kind of a feeder into all of those hires at other organizations.”

The pay equity issue is likely to persist in the coming months. The Biden administration said recently it would raise wildland firefighter salaries to no less than $14 an hour, and Sen. Dianne Feinstein (D-Calif.) continues to press for legislation to create a new federal job classification for fire crews and to lift a pay cap that sometimes precludes overtime pay.

Not everyone is thrilled with Moore’s appointment. Some skeptics say he’s not the ideal choice to handle the agency’s troubles with sexual harassment — an issue that’s arisen especially in Western fire crews. Critics of logging on federal land also see him as a continuation of a misguided Forest Service emphasis on cutting trees for commercial purposes.

Although the conservation community can work with Moore — who used to work for the Agriculture Department’s Natural Resources Conservation Service — another reported candidate, Leslie Weldon of the agency’s Work Environment and Performance Office, might have been a preferable choice, said Susan Jane Brown, staff attorney with the Western Environmental Law Center.

“Moreover, as a Black woman who has been working diligently to address the Forest Service’s history of sexual harassment, particularly in the fire ranks, and since that is an issue with which Region 5 continues to struggle mightily, I would have preferred the optics of a woman in the top Forest Service leadership role,” Brown told E&E News, adding that she hopes to be inspired by Moore.

The incoming chief has pleased some social justice advocates, though, as he’ll be the first Black person to hold the job, a distinction USDA noted in its announcement.

While Moore has spent much of his career in California, he’s not a stranger to national forests elsewhere. He spent five years as supervisor of the Forest Service’s Eastern Region, based in Milwaukee.

On a policy level, Moore isn’t likely to offer much change to the Forest Service’s approach on timber harvesting — good news to industry groups and lawmakers who see wood products and forest health as going hand in hand, and bad news to organizations that see the agency as too geared to logging.

“As a regional forester, Randy was very much like the others — focused on getting the cut out and promoting commercial logging based on scientifically discredited myths like the ‘overgrown’ forest notion,” said Chad Hanson, a forest ecologist in California who opposes logging on national forests and who’s published studies suggesting forests that have been logged are at greater, not less, risk of wildfire (Greenwire, Aug. 7, 2018).

“I don’t expect movement in the direction of science or real climate solutions with Mr. Moore as chief,” Hanson said.

Proponents of multiple uses, including logging, on national forests praised Moore for his use of the programs that bring local governments and nonprofit organizations into forest management, since Forest Service lands often border state and privately owned forests.

“Good neighbor” contracts allow the Forest Service to work with state, county and tribal governments, and they’re negotiated and signed by the regional forester. While the agency doesn’t set a target number of contracts for any region or forest, the Forest Service said, such collaborative projects make sense in California and Moore has used them aggressively, supporters said.

In California, Moore is a key figure in an agreement between the state and the Forest Service to reach 500,000 acres of hazardous fuels reduction annually within a few years, Brink said.

Moore’s experience working with nonfederal partners suggests he’ll be “thoughtful about forest management,” said Terry Baker, CEO of the Society of American Foresters. “It’s not just the Forest Service on its own.”

He’ll be balancing those interests while adhering to the Biden administration’s goal of conserving 30% of land and water by 2030, Baker said. Policy groups are watching for how the new chief weighs preservation against active management, he said. “It’s also about what role do working forests play.”