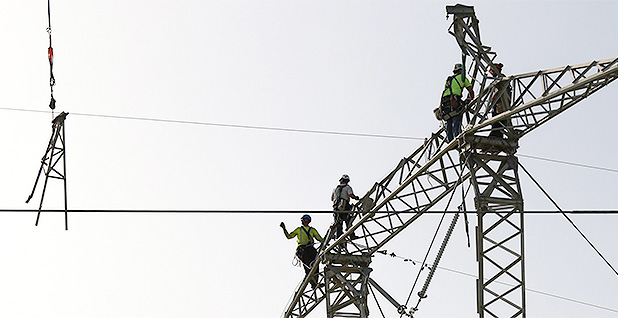 The disaster of Hurricane Maria was twofold: first, a natural disaster. Second, a bungled human response to a humanitarian crisis and the longest blackout in American history.

Grid restoration work is finally picking up speed nearly seven weeks after the hurricane’s strike. But the faltering response has still not been resolved into a unified campaign to bring power back (Energywire, Nov. 3).

"We have to get away from the idea that somebody is in power, and in control, and realize that you’ve got four separate entities that have to work together and not in an adversarial way," Bishop said, naming the Federal Emergency Management Agency (FEMA), the Army Corps of Engineers, the government of Puerto Rico and the Financial Oversight and Management Board for Puerto Rico, established by Congress to watch over the commonwealth’s bankruptcy.

A memo by the committee’s majority staff states that the Whitefish contract "imposed exorbitant contract fees, was approved under suspicious circumstances, and was used as justification for why PREPA did not activate the mutual assistance program offered by the American Public Power Association (‘APPA’)." Commonwealth Gov. Ricardo Rosselló canceled the Whitefish contract on Oct. 29, leaving grid recovery divided between PREPA and the Corps of Engineers, assigned by President Trump to lead rebuilding of the island’s shattered transmission and distribution lines.

While the bankrupt Puerto Rico utility and its choice of Whitefish are obvious targets for legislators, there are other issues raised by members of Congress, their staffs and critics of the recovery effort.

Was a critical opportunity lost between hurricanes?

After Hurricane Irma hit the island on Sept. 6, PREPA officials prepared a mutual aid request for APPA, the trade association that coordinates the dispatch of emergency grid repair crews from other U.S. utilities — crews that in Puerto Rico’s case would have to be ferried to the island, raising the costs and complexity of the relief efforts.

The request had been under discussion for several days when FEMA officials in Puerto Rico declared that the request must come through another commonwealth office, the Puerto Rico Emergency Management Agency (PREMA), according to Jorge Camacho, former chief of infrastructure and system planning for the District of Columbia Public Service Commission, who was serving as a consultant to PREPA.

FEMA called a meeting for Sept. 15 at the agency’s office in the San Jose Caguas suburb, and there, FEMA officials challenged the scope of PREPA’s mutual aid request, according to Camacho, although there was no policy justification for FEMA to do that, he said. "There was no reason for them to be in the middle of this request," Camacho said in an interview with E&E News. A FEMA spokesman said yesterday it had not yet had time to review and respond to Camacho’s account.

On Monday, Sept. 18, the first hurricane watch for Maria was issued, and the request was still being worked on Wednesday, when Maria hit, pulverizing the island’s power network, Camacho said.

"After Hurricane Irma, the PREMA director was designated as the Governor’s Authorized Representative who is the Grantee/Recipient and manager of the public assistance grant from FEMA," a FEMA spokesperson said in an email. "FEMA notes specific instances in which the Applicant needs to submit written correspondence to obtain FEMA approval. The Applicant [PREPA] needs to submit all written correspondence through the Recipient [PREMA]," FEMA’s spokesperson added.

Camacho said FEMA’s role is to review and decide on reimbursement requests, but not to screen requests for mutual aid in advance. "If FEMA hadn’t interceded, the mutual aid request would have pushed forward" before Maria, hastening the arrival of mainland support, he contended.

Instead, immediately following Maria, PREPA did not ask APPA to invoke mutual aid, according to APPA engineering director Michael Hyland, giving the contract to Whitefish. The Montana company was not mentioned at the Sept. 15 meeting, Camacho said, but a PREPA official there did not push for fast action on mutual aid, he added.

Only after the Whitefish contract came under fire did PREPA drop the Montana contractor and request mutual aid, on Oct. 31.

Beyond that, Trump’s public engagement on Puerto Rico’s desperate plight has included an in-and-out visit to the island with an appearance at a relief center that prompted criticism; insults traded with the mayor of San Juan over the pace of federal support; conflicting tweets that alternatively expressed support and impatience with Puerto Rico’s efforts; and an endorsement of Rosselló’s leadership.

Trump said he scored his administration’s response as a "10" after noting the daunting challenges of helping the financially crippled island. "With that being said, I think we’ve done a really great job, and we’ve had tremendous cooperation from the governor. And we are getting there, and people are really seeing the effort that’s been put into Puerto Rico," Trump said Oct. 19.

Since the president’s "10" rating, PREPA canceled the Whitefish contract; Rosselló has sharply rebuked the Army Corps’ efforts; and the oversight board moved to take charge of rebuilding, setting up a conflict with PREPA and the Puerto Rico Energy Commission, which asserts its statutes prevail over the board’s federal authority.

Despite mounting evidence of communications disconnects among FEMA, PREPA and Whitefish, the federal agency was still projecting an optimistic picture in mid-October. A FEMA release on Oct. 11 said, "FEMA and the full force of the federal government continue to make progress towards recovery, working hand-in-hand with U.S. Virgin Islands and Puerto Rico officials, municipalities, businesses, and voluntary agencies on the islands since Hurricane Irma’s landfall on Sept. 6 and Hurricane Maria’s landfall on Sept. 19."

But the Army Corps has had to steadily expand its role. It initially signed a $240 million contract with the Texas-based Fluor Corp. last month, according to a redacted copy of the initial contract released under Freedom of Information Act laws. The contract states that PREPA and its contractors will be responsible for 30 percent of the "total work" rebuilding the grid in the San Juan, Mayaguez, Ponce, Bayamon, Carolina and Arecibo areas, while the Army Corps will take on the remaining 70 percent of the job. On Oct. 29, the Army Corps moved to more than triple the price ceiling for its contract with Fluor, to $840 million, for grid repairs including debris removal and control system restoration.

Under a 2008 federal emergency response blueprint, the Department of Energy is the lead federal agency designated to coordinate damage assessments and provide technical expertise to utilities to help overcome restoration challenges after natural disasters.

The unit within DOE’s Office of Electricity that is called on to carry out emergency technical assistance "is extraordinarily underfunded," said Jeffrey Genzer, general counsel of the National Association of State Energy Officials (NASEO). The annual budget is about $9 million, to cover the entire nation and its territories, he said. "It’s a joke."

"Their hands are tied by a lack of resources," said NASEO Executive Director David Terry.

DOE officials, working on the same strained budget, also conduct as many disaster planning exercises with state officials as possible. Three months before Hurricane Harvey struck Houston, DOE ran such a test of a simulated hurricane hitting the Texas coast. While no amount of game planning could have prepared Puerto Rico for the fury of Maria, a similar exercise there could have highlighted the communications breakdowns that have delayed support, the NASEO officials said. They don’t recall that a disaster exercise has even been staged for Puerto Rico (Energywire, Sept. 8).

Should industry have acted sooner?

When it became clear in Maria’s immediate aftermath that PREPA was not seeking mutual aid from mainland utilities, should the industry have sounded an immediate alarm, perhaps setting in motion the kinds of federal intervention that did not occur until a month after the storm?

When it was informed on Sept. 28 that PREPA had chosen Whitefish to coordinate recovery, APPA’s Hyland said APPA did not see that as signaling that the recovery could fail. "That was not our understanding. We just remained poised to send additional help if called upon," Hyland said. "We were glad to see ‘boots on the ground’ to help PREPA with the massive restoration effort."

APPA members were willing to come to Puerto Rico’s aid, he said. "But you can’t send crews if you don’t know that they’ll have a place to sleep, food to eat and be safe so they can do their work. And crews can’t do their work without having the right materials and equipment.

"One has to be aware of the many logistical challenges presented by the terrain. You need careful coordination between all the different parties — government, contractors and industry — to ensure that the work advances efficiently. You need a strong incident commander, someone in charge. You need to recognize that a rebuild is a long-term effort and prepare for that by scaling up and down as needed," Hyland said.

Puerto Rico’s plight was discussed many times after Maria struck by members of the Electricity Subsector Coordinating Council, an emergency group that brings together utility chief executives and senior federal officials, according to Scott Aaronson of the Edison Electric Institute, the ESCC secretary.

"There were innumerable conversations about how best to support the people of Puerto Rico and the power restoration mission, in the face of an island with financial difficulties and a bankrupt electric company and serious logistical challenges, and a questionable contracting decision with Whitefish," he said.

"It’s not that they didn’t fill out the mutual assistance request in triplicate and say ‘pretty please.’ That’s not necessary. [But] you have to have a willing patient. This is a territorial government, an electric company that has its own authority," Aaronson added.

"Once the Corps of Engineers was assigned, it was how best to support their contractors and subs.

"We were thrilled when they [PREPA] asked us for help," Aaronson said.

Not until last Thursday, with PREPA’s formal request for help finally in hand, did the entire U.S. utility sector roll into action.

"While yesterday was effectively day one for this new phase in the restoration effort, we know that our fellow citizens in Puerto Rico have been without power for more than a month," EEI President Tom Kuhn said Thursday. "We are committed to resolving problems quickly, and we already are having solutions-oriented conversations, improving supply chain logistics, and dispatching people and equipment to Puerto Rico."

As part of the response, 350 utility personnel and 220 vehicles from public and private electric companies in New York state are headed to Puerto Rico, with more to follow.

Who will direct the recovery?

Meanwhile, direction of the recovery is in play in other venues.

The memo prepared for today’s hearing by Bishop’s staff notes that on Oct. 26, the oversight board filed an "urgent motion" with the federal bankruptcy court handling Puerto Rico’s case, seeking appointment of the board’s revitalization officer, Noel Zamot, as "chief transformation officer" for the island’s grid restoration.

Zamot is scheduled to appear today before the Natural Resources Committee; Ramos was expected to testify but withdrew late yesterday, pointing to urgent needs at home.

The oversight board seeks to give Zamot authority to "oversee the implementation of PREPA’s long and short term plans," "the application process for Federal funds," and management of federal funds disbursed to PREPA to "ensure funds are spent on intended sources and prevent waste," Bishop’s staff said.

"Essentially, Mr. Zamot will act as chief executive officer of PREPA, superseding the authority of PREPA’s current executive director and governing board," the staff memo said.

But his appointment was challenged on Oct. 27 by Rosselló. "I have no objection to the collaboration. I object to the takeover," the governor said at a news conference. "This goes far beyond their ability within the PROMESA law," he added, referring to the congressional action creating the oversight board.

Zamot’s appointment is also contested by holders of Puerto Rico’s bonds, which want a court-named receiver in charge instead.