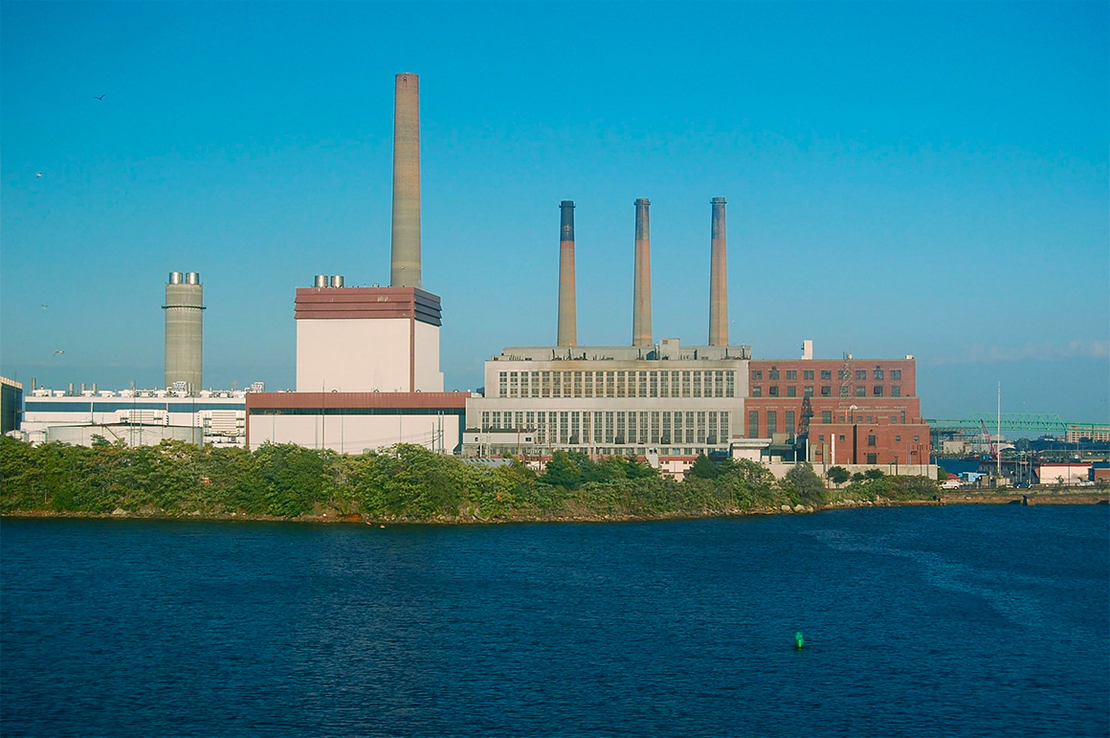 The Mystic Generating Station in Massachusetts, which burns oil and gas. Fletcher6/Wikipedia

New England power plants burned more oil for electricity on a single day during last month’s deep freeze than they have in four years, underscoring the gap between Northeastern states’ clean energy targets and the current resource mix in the region.

Oil resources supplied 29 percent of a six-state region’s power on Dec. 24 as temperatures hovered in the teens, natural gas supplies tightened and some generators failed to perform as expected. The amount of electricity generated by oil that day was higher than it had been since a weekslong polar vortex hit New England in January 2018, according to an E&E News review of annual reports from the regional grid operator on fuel use.

New England and New York are the only parts of the country that rely extensively on oil resources for backup power when other electricity supplies are expensive or in short supply. In both regions, oil is used sparingly throughout the year, having accounted for 0.2 percent of the total electric load in New England in 2021, according to ISO New England, the area’s nonprofit grid operator.

But the exception is on days like Dec. 24, when frigid temperatures spurred New Englanders to crank up the heat, leaving less natural gas available for electricity. That pushes electric generators with oil stored on-site to begin burning the liquid fuel.

“It’s certainly better than the alternative of having blackouts,” said Michael Goggin, a vice president at Grid Strategies LLC, a pro-clean energy electric power consulting firm. “But in the long term, there are much better solutions.”

Natural gas emits about 30 percent less climate-warming carbon dioxide than oil when burned, although oil emits less carbon dioxide on a unit-by-unit basis than the most polluting fuel: coal. Typically, natural gas makes for a cheaper source of electricity than oil nationwide.

New England’s dependence on oil during times of high energy demand is closely linked to its longstanding reliance on natural gas, which provided just under half of the region’s power in 2021. When natural gas supplies are constrained and energy demand is high, there is rarely any option other than oil to keep electricity flowing, based on the current resource mix.

“It’s been years that this back and forth switching between fossil fuels has been going on, and it’s not improving,” Amy Boyd, vice president of climate and clean energy policy at Acadia Center, a New England-based environmental advocacy group, said in an email. “We need to instead come to a better solution.”

Experts in New England mostly agree that burning oil on rare, exceptionally cold days is probably cheaper and more politically tenable than another option floated over the years: building additional natural gas pipelines to increase the supply of gas flowing to the area.

Still, one question for New England is how long its old, oil-burning generators will stick around, given how infrequently they run and the high costs of maintaining them relative to how much revenue they bring in, said John Simonelli, the former director of operations support services at ISO New England.

“At some point, I think it’s not sustainable,” said Simonelli, who now works as a consultant. “I don’t think the revenue streams are going to be there, and those units are going to retire. They’re old.”

Dan Dolan, president of the New England Power Generators Association, said earlier this month that oil-fired generation performed “at an extraordinary level to support reliability and keep prices lower than they otherwise would have been.” The group represents many of the companies that own oil- and natural gas-fueled power plants in the region.

“It is notable that in the immediate days following the event, generators have devoted large amounts of capital to resupply oil tanks to virtually the same levels as before the storm,” Dolan said in an email.

The use of oil during the Christmas Eve deep freeze exemplifies a challenge that is only becoming more dire: Given that most New England states have established requirements to switch to carbon-free power, how will the region kick its dependence on fossil fuels?

Offshore wind could play an increasingly important role for keeping power flowing on cold winter days in the coming years, assuming proposals stay on track as intended. One offshore wind project off the coast of Massachusetts, Vineyard Wind, is currently under construction and expected to come online next year, but other facilities being developed won’t start producing power until the mid to late 2020s.

Meanwhile, Massachusetts, Connecticut, Rhode Island, Maine and Vermont each have laws in place requiring nearly all of the electricity consumed in their states to come from carbon-free resources by midcentury or sooner.

Several states also have targets that kick in by the end of this decade. A law in Massachusetts, for example, requires the Bay State to cut greenhouse gas emissions from electricity in roughly half by 2030 relative to 1990 levels.

Last year, just 16 percent of power in the ISO-NE region came from renewable resources like solar, wind and hydroelectric dams.

“It’s an unfortunate truth that we rely on gas and oil-fired power plants that pollute to maintain a reliable energy system,” said Mike O’Boyle, director of electricity policy at Energy Innovation, an energy and climate policy think tank. “Clean energy policies, for them to be successful, have to include incentives and investments in technologies that can displace the reliability services that those plants provide.”

Oil-fired electric generators in the Northeast are not a new phenomenon. What’s unusual is that they still play a crucial role for power in New England and New York during select days of the year.

In the 1960s and ‘70s, demand for electricity skyrocketed in New England, Simonelli said, as the population in the region grew. So energy companies built “quick-to-assemble” plants that only burn oil, some of which are still around today, he said.

Nationally, oil use for electricity peaked in the 1970s, with 16.8 percent of all electricity in the U.S. generated by oil in 1977, said Ari Peskoe, director of the Electricity Law Initiative at Harvard Law School, citing federal data.

New England may have held onto oil assets longer than some other parts of the country.

By 2000, ISO-NE reported that 22 percent of electricity in the region still came from oil, Peskoe said. As the decade went on, natural gas production increased, becoming the most widespread source of electricity nationwide by 2016.

Around the same time, ISO-NE realized that it would need to increase the amount of gas flowing into the region — which lacks natural gas reserves — if it was to rely primarily on that fossil fuel for both heating and electricity.

Former Massachusetts Gov. Charlie Baker (R) attempted to push forth a policy whereby electric consumers would help finance new pipelines, but that was struck down by the Massachusetts Supreme Judicial Court in 2016.

“There’s no business model for new pipelines” in New England, Peskoe said in an email.

In 2014, ISO-NE established programs to incentivize generators to be able to perform during tight grid conditions, including by having dual-fuel capabilities with oil and natural gas. That’s part of why some gas generators today can also run on oil.

“This strategy is a lot less expensive, so just on economics it makes sense, but I think from a climate point of view it makes sense, too,” said David Littell, an energy and environmental attorney at the law firm Bernstein Shur and former commissioner at the Maine Public Utilities Commission. “You might have higher emissions during an emergency situation overall, but you’re not opening massively subsidized pipelines that would give gas preferential treatment.”

While some state and federal regulators have continued to call for new gas pipelines, there would likely be swift opposition from environmental groups and politicians if any were proposed, observers said. Still, the fact that New England burns oil for electricity on days like Dec. 24 can be seen as a byproduct of the region’s struggle to build energy infrastructure in recent years, including some carbon-free projects.

In addition to pipelines, proposed new electric transmission lines have faced setbacks, most notably a proposal from Avangrid Inc. to bring hydropower from Quebec to the New England power grid. The project has been opposed by some environmental groups because of concerns about the impacts of dams in Canada and the effects of the project on wildlife and natural resources in northern Maine.

“Everyone wants to decarbonize and do the right thing and build renewables, but just not near me,” Simonelli said. “As long as we have that philosophy, no matter what you’re trying to build — a pipeline, a transmission line a new power plant — you’re in for a tough fight.”

To reduce New England’s use of natural gas and oil, climate advocates want to see the region move forward with planned clean energy projects and invest more in demand-side programs, which could help reduce energy consumption when supplies are tight.

There are currently about 31 gigawatt-hours of demand response resources in New England, or about 0.03 percent of the total resource mix, according to the grid operator.

At least 10 percent of the electricity consumed on Christmas Eve likely could have been shifted or reduced with the right demand-side incentive programs in place, said Mike Hogan, a senior adviser at the Regulatory Assistance Project.

Not only would more demand response help maintain reliability, but it could also save consumers money, Hogan said.

“Examples include electric hot water heating, municipal water pumping, commercial refrigeration units, pre-heating buildings that use heat-pumps, [electric vehicle] charging, and there are many more,” he said. “Everyone would benefit, not just the flexible loads.”

Demand response participation has been “consistent” over the past several years, said ISO-NE spokesperson Matt Kakley.

“In the energy market, they are dispatched by price, similar to generators, so we have seen more activity during periods when prices are high,” Kakley said in an email.