New England says no to natural gas, yes to renewables 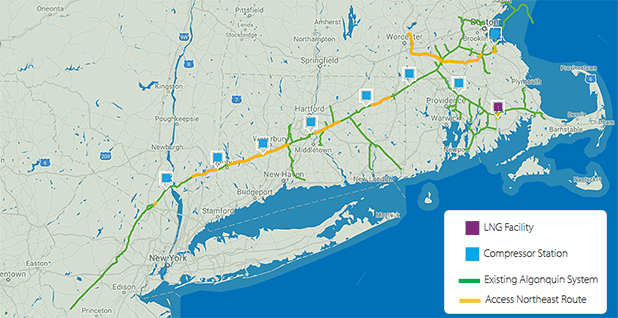 A pair of decisions in New England on Tuesday may help clarify where the region is heading when it comes to its energy future.

In Connecticut, the Department of Energy & Environmental Protection called off its procurement of more natural gas, a move that could spell the end of Spectra Energy Corp.’s Access Northeast project and efforts by regional leaders to increase the amount of natural-gas-fired electric generation capacity.

Meanwhile, Massachusetts, Connecticut and Rhode Island on Tuesday selected seven solar and wind projects totaling 460 megawatts in response to the three states’ New England Clean Energy Request for Proposals announced last year. The next step is to negotiate contracts by mid-January for the power from each project.

"The decisions and the timing of the decisions aptly reflects what ought to be New England’s priorities and indicate that our states can proceed with clean renewable energy projects that are domestically sourced and cost-effective for ratepayers," said Greg Cunningham, director of the Conservation Law Foundation’s clean energy and climate change program.

The six-state region has been growing more dependent on natural gas for power generation, the result of coal plants closing and the shuttering of two nuclear plants. The risks of that reliance were exposed during the winter of 2013-14, when persistently low temperatures taxed energy infrastructure and resulted in record levels of electricity demand and high prices.

The Connecticut decision to cancel its review of seven proposals was triggered by the state’s conclusion that its ratepayers would "disproportionately" bear the cost of natural gas infrastructure.

The New England states had settled on a first-of-its-kind funding system for new natural gas pipelines that would have electricity customers pay a charge for their construction.

But that consensus was upended when the Massachusetts Supreme Judicial Court and the New Hampshire Public Utilities Commission ruled the system unlawful and "materially reduced the ability for the costs of projects to be shared among a substantial portion of the region’s ratepayers," the Connecticut decision said.

Rhode Island has been considering a similar charge, but that proceeding has been put on hold.

"We didn’t like the financing scheme to begin with," said Dan Dolan, president of the New England Power Generators Association.

In Dolan’s view, the funding mechanism "undermines the economics of non-gas plants at a time when we’re seeing the lowest energy prices in New England’s history."

Moreover, "it picks winners and losers just among the gas plants in New England," he said, citing in particular the $3 billion Access Northeast project. "While it had a lot of gas plants connected to that pipeline, it by no means had all of them.

"You’re subsidizing fuel for those plants that have the dumb luck of being located on that pipeline," and then for any other gas plant, "you’re getting undercut by your competitors simply on the basis of the states deciding to subsidize one particular pipeline," Dolan said.

"I cannot foresee a path forward for that project," the Conservation Law Foundation’s Cunningham said, unless Spectra uses traditional pipeline funding practices where the buyers of the gas pay. But that path has been a nonstarter for years, which is why the states developed their alternative funding system.

Spectra spokesman Creighton Welch said the company is "disappointed" because "the regional pipelines are running full and demand is growing which exacerbates the possibility of electric blackouts and shortages of natural gas for home heating."

He noted that ISO New England, the region’s grid operator, said New England’s precarious power generation during the winter may become unsustainable in 2019 during extreme cold conditions without immediate action to solidify the region’s energy infrastructure.

In announcing the results of its clean energy RFP, Massachusetts, Connecticut and Rhode Island did not select the Northern Pass project, a 192-mile transmission line from Hydro-Québec’s hydroelectric plants in Canada to New Hampshire and the rest of New England. The project is being developed by Eversource Energy, formerly Northeast Utilities.

Cunningham said the transmission line was also handicapped by a "hefty price tag and significant permitting and political uncertainty."

Eversource issued a statement saying it will focus its attention on an upcoming request for proposals in Massachusetts for up to 9.45 gigawatt-hours of clean energy resources mandated by recent legislation that must be issued by April 1, 2017.