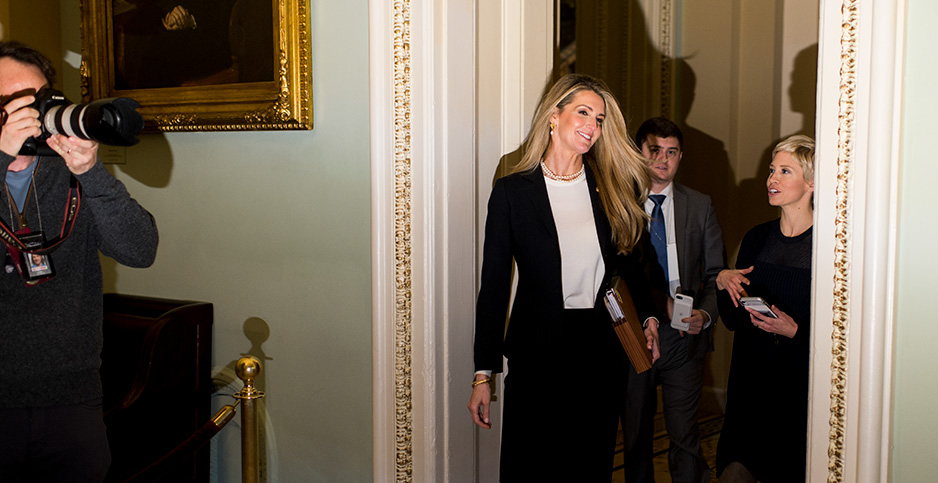 Ten years ago, Kelly Loeffler was a top executive at a company that advocated for cap-and-trade climate change legislation in Congress and stood to benefit greatly from it.

Intercontinental Exchange Inc. (ICE), where Loeffler was vice president of communications and investor relations, paid lobbying firm McKenna Long & Aldridge $260,000 during a one-year period in 2009 and 2010 to lobby on financial policy matters and cap and trade.

The advocacy conflicts with the current position of the Republican Party in opposition to any mandated fees for greenhouse gas emissions.

Loeffler has not said much publicly about her climate change positions. But she has framed herself as a strong conservative, particularly amidst a primary battle for her seat this year against Rep. Doug Collins (R), an outspoken conservative and ally to President Trump, who formally announced his long-expected campaign yesterday.

"No one will fight harder for our state, for our nation, for our president and for our conservative values," she said in December when accepting Kemp’s appointment.

Loeffler’s office did not return requests for comment on ICE’s advocacy, Loeffler’s role in the matter or her current positions on climate. The CEO of ICE is Jeffrey Sprecher. Loeffler and Sprecher have been married since 2004.

Cap and trade was once the consensus climate policy in the Democratic Party and was a top priority of President Obama. While legislative approaches differed, the idea was to require companies to buy permits to emit greenhouse gases, permits that could be traded on markets.

ICE bought Climate Exchange in 2010 and expected the value of the company to grow greatly as carbon trading became mandatory.

"We’re very well positioned if there is U.S. regulation for some kind of cap and trade," Sprecher said in a May 2010 earnings call that Loeffler also participated in, shortly after announcing the Climate Exchange acquisition.

ICE told investors in a 2010 filing, when it had the partnership with Climate Exchange but had not bought it out, that ICE would "likely benefit from a cap and trade system" because of benefits to the Chicago exchange.

Richard Sandor, Climate Exchange’s founder, had explicitly advocated for cap-and-trade legislation before the ICE acquisition, writing in a 2009 Roll Call piece that "the time is ripe for the U.S. to benefit" from such a market system.

Sandor, largely credited as the inventor of cap and trade for emissions, left the company when ICE bought it.

Cap-and-trade legislation ended up failing. The bill from then-Reps. Henry Waxman (D-Calif.) and Ed Markey (D-Mass.) was approved by the House in 2009.

But Senate leaders gave up on passing their own version in July 2010, saying they could not negotiate a bill that would reach the 60-vote threshold needed to pass the upper chamber.

ICE went on to wind the Chicago Climate Exchange down later that year and lay off its staff, concluding that it could not survive without legislation.

"The bulk of the users have said to us that they really don’t want to continue to trade voluntarily in the absence of any credit for their work by the current administration," Sprecher told the Associated Press at the time.