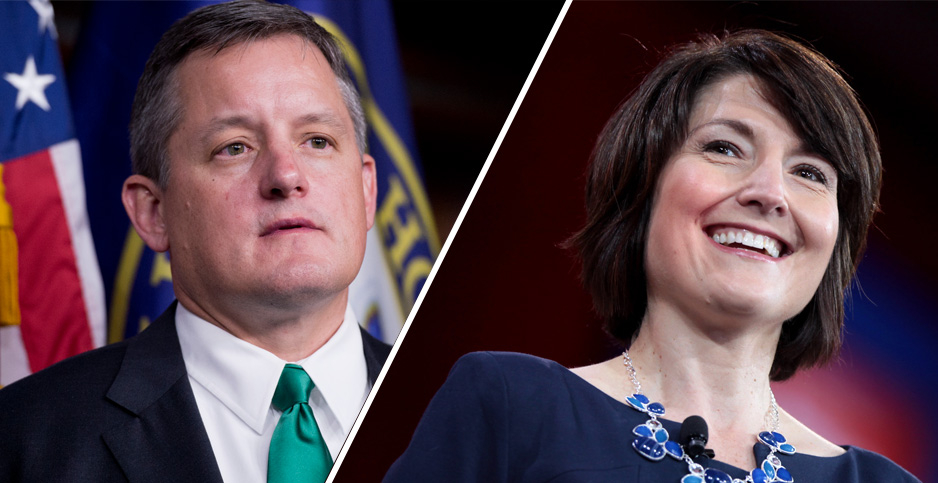 The new Republican leaders for the House Energy & Commerce and Natural Resources committees could help soften the party’s image without abandoning largely conservative ideas on energy and the environment.

The House Republican Conference is expected to ratify in the coming days Reps. Cathy McMorris Rodgers of Washington state and Bruce Westerman of Arkansas as the ranking members on the Energy & Commerce and Natural Resources panels, respectively, for the next Congress.

Like current E&C Committee ranking member Greg Walden (R-Ore.), McMorris Rodgers has a background in party leadership and gave generously to other GOP candidates this cycle.

McMorris Rodgers and Walden both hail from the rural Northwestern districts stacked on top of one another in eastern Oregon and Washington.

Republican leaders, among them Minority Leader Kevin McCarthy of California, were also eager to put more women in top posts. McMorris Rodgers would be the first woman to help lead the E&C Committee, something Walden noted as "historic."

McMorris Rodgers’ main rival for the post was Rep. Mike Burgess (R-Texas), a free-market conservative, former doctor and a skilled floor debater who was seen as strong supporter of the fossil fuel industry. Some saw him as more willing to take on Democrats and question climate science.

While McMorris Rodgers is not seen as a member of the tea party, she made clear in vying for the post that she would challenge Democrats, especially progressives pushing the Green New Deal.

"From blatant assaults on free speech, to Medicare for All, to the Green New Deal, Energy and Commerce is at the very center of the battles for freedom to beat socialism and hope to beat fear," she said.

"My goal is to maximize Energy and Commerce so House Republicans win the majority and secure America’s future global leadership as the best place in the world to usher in a new era of innovation, cure diseases, and raise people’s standard of living," McMorris Rodgers said.

McMorris Rodgers’ approach is in line with party leaders who believe attacks on socialism and the Green New Deal helped them pick up seats in the 2018 election.

McMorris Rodgers is a member of the House’s Main Street Republican Partnership, which promotes itself as the "governing wing of the Republican Party."

Its members, who include Walden and former E&C Chairman Fred Upton (R-Mich.), are among the House’s more moderate GOP voices on climate.

They often favor using commercial technologies to fight global warming and expanding clean energy rather than arguing over the science behind it.

"Congresswoman McMorris Rodgers has been one of the strongest leaders in Congress for hydropower as a source of clean energy for her district and is a tremendous advocate for advanced nuclear, storage, carbon capture and other clean energy technologies that will help solve the climate challenge," Powell said.

McMorris Rodgers has talked about how dams along the Snake and Columbia rivers in her district have allowed for more barges to use waterways, which she sees as a low-emission, eco-friendly transportation option.

However, the League of Conservation Voters does not see her as much different from other Republicans who, like her, back an "all of the above" energy strategy that allows room for fossil fuels.

Mitch Friedman, executive director of the National Wildlife Federation’s Conservation Northwest affiliate, said he believes his group will be able to find ways to work with McMorris Rodgers, though it has clashed with her in the past over how to preserve the region’s salmon.

"We appreciate the history of open communication and working together on common objectives, and see promise for this to expand for the benefit of our natural resources," Friedman said.

Just like many Republicans hope McMorris Rodgers will help soften their party’s optics by promoting energy policies other than its traditional focus on oil and gas, allies of Westerman expect the incoming Natural Resources Committee ranking member to emphasize that conservatives care about the environment.

Unlike many of his Republican colleagues, Westerman, a Yale University-trained forester, acknowledges climate science.

He supported the Great American Outdoors Act, sweeping conservation legislation signed into law over the summer that the retiring committee ranking member, Rep. Rob Bishop (R-Utah), railed against and sought to sabotage, despite support from GOP leaders.

And prior to the onset of the COVID-19 pandemic, Westerman was prepared to travel around the country pitching potential 2020 voters on the House GOP’s emerging environmental platform.

"Republicans are the party of conservation," Westerman told E&E News earlier this fall. "I want to bring Republicans back to conservation. … There is a hunger to see Republicans taking a lead in more of those issues."

One of the planks in House Republican environment platform was Westerman’s "Trillion Trees Act," H.R. 5859, legislation that would encourage public-private partnerships to incentivize mass tree-planting as a method of carbon reduction.

Democrats have derided that bill as feel-good window dressing that would be largely insufficient for combating the climate crisis.

They are also unlikely to be impressed by Westerman’s belief in climate change when paired with his stance against the kinds of regulations progressives think are necessary to protect the planet.

Westerman, a team player with close ties to McCarthy, is also unlikely to take positions that stray far from the party line or go beyond the comfort level of most of his colleagues.

But Westerman remains hopeful he can be a bridge between the two parties, however idealistic that may seem in a politically polarized Congress.

"I think all humans care about the environment and climate and conservation because we all live here, we all breathe here, we all drink the water," Westerman said in a recent interview.

"We just have different approaches to how we solve the problems, and what I’m bringing to the table is an approach to use science and use innovation and let the markets work," he said. "And I think that is going to be a popular way to address the issue with conservatives and with politically liberal people."

Westerman also thinks he’ll be able to bridge the regional differences that have sometimes caused ideological rifts among congressional Republicans: He will be the first non-westerner to lead Republicans on the House Natural Resources Committee since 1979.

On the GOP side, the committee has typically attracted Western state conservatives whose constituents often feel unfairly targeted by the federal government, be it through mass land acquisitions or regulations controlling how to otherwise use the land.

Bishop said he never had trouble filling seats on his side of the aisle because there was always Western interest in serving on the panel to fight for those interests, unlike Democrats, who he alleged had to be "dragged" onto the committee.

In October, Bishop said his replacement didn’t have to be from the West, but it didn’t hurt for the chair or ranking member to have that perspective.

Rep. Paul Gosar (R-Ariz.), outgoing chairman of the Congressional Western Caucus and a known conservative firebrand who is unafraid of provocation and confrontation, challenged Westerman for the ranking member job in large part by touting his Western credentials.

Westerman, however, argued he spoke for all members on the panel, not just those of one region.

"My district is a great blend between private land and public land," he told E&E News. "A benefit to me being from the 4th District of Arkansas and having the geography and rural district like I’ve got, I’m able to bring a new perspective, not only on how we deal with ‘Western issues’ but how those issues affect the eastern part of the country as well."

Rep. Dan Newhouse (R-Wash.), who was elected last week to succeed Gosar as chairman of the Western Caucus, said he wasn’t bothered by where Westerman’s home state falls on the map.

"His training and the background he brings to the table, I think those things truly will help unite Republicans around a strong message as it relates to Natural Resources," said Newhouse, who was supporting Westerman for the job for months.

Pennsylvania Rep. G.T. Thompson, another staunch Westerman supporter who won his own Steering Committee vote yesterday to lead Republicans on the House Agriculture Committee, added, "He has absolutely got probably the best biography for the Natural Resources Committee than we’ve ever seen, quite frankly."

Thompson would step in for Texas Republican Rep. Mike Conaway, who is retiring at the end of the current Congress.

Rep. Jason Smith (R-Mo.) got the nod to serve as ranking member on the Budget Committee. Current ranking member Steve Womack (R-Ark.) is leaving the post to focus on other priorities.